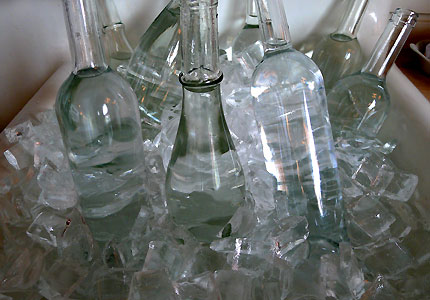 A few decades ago, there were only a small number of choices for bottled water, but consumers today find more than 3,000 brands in the marketplace. We've created this primer on some of the top brands of bottled water to take the guesswork out of your next trip down the grocery store aisle. Next time you're thirsty, why not try reaching for one of the 10 best bottled waters around?

Discovered by a French nobleman during the French Revolution, Evian stems from a source that was thought to hold curative and restorative powers from the start. Evian begins as water that emerges from the Source Cache in France in a mountain tunnel at 52.88 degrees Fahrenheit. The source is fed from the melted snow and rain that filters through glacial sand from the Vinzier Plateau over a period of fifteen years. The glacial sand is surrounded by clay, which protects the water from pollution and gives it its mineral composition and taste. The water is bottled at a nearby bottling plant, which is highly automated and exceptionally hygienic.

FIJI Water, natural artesian water, began being bottled in 1996 at the source in the Yaqara Valley of Viti Levu, one of Fiji's two principal islands, and is now the number one imported bottled water in the United States. FIJI's natural artesian origins provide the water with a unique mineral profile, including its high silica concentration. FIJI Water is known for its iconic square bottle and its signature soft, smooth taste, which comes from the natural silica content and trace amounts of calcium and magnesium. As part of that strict commitment to quality, no human hands are allowed to touch it. Perfectly protected from outside air and external elements, FIJI Water is untouched until you unscrew the cap.

Founded in 1888, Gerolsteiner Sparkling Mineral Water is the number one water export in Germany. In the German style of stringent purity and cleanliness, Gerolsteiner's production follows strict purity protocols. Originating in springs from the area of Volcanic Eifel, Gerolsteiner flows from ancient, rocky volcanic reservoirs 200 feet beneath the earth's surface. Minerals and carbonic acid leach into the water as it percolates up through the volcanic rocks, giving Gerolsteiner its exceptionally high amount of calcium, bicarbonate and magnesium. Gerolsteiner is a great source of essential nutrients that our bodies need daily and its natural carbonation gives Gerolsteiner its refreshing, neutral taste.

Relatively unknown in America, Italy's number one brand of sparkling mineral water was established in 1893, though Italians have been drinking from its source for hundreds of years. This naturally effervescent water is bottled directly at a spring located in the protected Sorgeto di Riardo Park near the extinct Roccamonfina volcano in Italy's Campania region. Ferrarelle is extremely mindful of the quality of its products, testing them more than 600 times each day. Care is also taken to safeguard the habitat surrounding the spring, and the company's bottling plants are powered by solar energy. Ferrarelle water, both sparkling and still, is bottled in glass containers rather than plastic, which protects its taste and purity and lessens the impact on the environment. Ferrarelle water begins as rainfall, which trickles through layers of rock in the ground, soaking up valuable minerals such as calcium, potassium, magnesium and fluoride. Nevertheless, it has no mineral taste and no unpleasant saltiness. It does have the thirst-quenching, pure taste of simple water, with a pleasant amount of fizziness.

Perrier is a naturally sparkling mineral water sourced from a spring in Vergèze, France. Originally called Les Bouillens, the spring has been used as a spa resort since Roman times. The distinctive bottle shape is said to have been inspired by Indian clubs used for exercise by spring owner Sir Saint-John Harmsworth. The water and carbonation are captured separately and recombined in the bottling process to preserve the natural sparkling flavor of the original water from the spring. Today, Perrier is marketed as a healthy alternative to soda drinks and cocktails and is available in a variety of flavors, ranging from pink grapefruit to lemon and lime.

San Pellegrino's humble origins began about 760 years ago when the region from which the water is sourced was first recognized for its namesake martyr, San Pellegrino. The spring of San Pellegrino is sequestered in the mountains north of Milan, Italy, and was made famous by quenching the thirst of Leonardo da Vinci who firmly believed in the water's curative powers. Today, the Fonte Termale, an opulent marbled drinking hall, is a monument to the glamour of "taking the waters." San Pellegrino's sources are three deep springs, which emerge from the ground at 69.8 degrees Fahrenheit. The waters come from an aquifer 1,300 feet below the surface, where limestone and volcanic rocks impart unique minerals and trace elements. Today, San Pellegrino averages sales of over 500 million dollars worldwide.

Since 1871, Mountain Valley Spring Water has been praised by U.S. presidents, world-class athletes and even Hollywood stars for its refreshing taste and potent health benefits. Bottled at its source in the hills between the Glazypeau and Cedar Mountains in Arkansas, Mountain Valley Spring Water has a unique mineral composition that is believed to have medicinal properties that can help alleviate chronic disorders. Elvis Presley, John Lennon and Joe Lewis were firm believers in the restorative powers of this water, and they weren't the only ones. Thirteen presidents (from Coolidge to Clinton) had Mountain Valley regularly served to their guests while they were in office, and the water is currently being served in the United States Senate. In fact, President Dwight Eisenhower drank the water medicinally following a heart attack. It was also served to a number of famous racehorses, including Nashua, Sunday Silence and the great Secretariat. This sparkling water is light and clean, with a delicate pH balance for premier taste.

Springing from a source in Wales' Cambrian Mountains, this carbon-filtered sparkling water first made a name for itself in London's high-end hotels in 1989. The water is naturally filtered through mineral deposits approximately 450,000,000 years old. Today, the lightly carbonated beverage is more widely distributed and imported to the United States. The water is bottled in a green factory designed to lower environmental impact of production. Ty Nant is recognizable by its striking blue glass bottles, the hue that apothecary bottles were colored during the Victorian era.

Volvic is bottled exclusively at its unique source in France and available in more than 60 countries. The basin supplying the Volvic spring source is located in the Regional Park of the Old Auvergne Volcanoes, a volcanic region that has been dormant for 10,000 years. The name Volvic refers to the town as well as a type of gray volcanic rock. The source of the water, the Clairvic Spring, was discovered in 1927. In 1965, the French Ministry of Health authorized the bottling of Volvic water. Volvic emerges year-round from its protected source at the constant temperature of 8.8 degrees Celsius.

Icelandic Glacial, a premium brand from Iceland and a fave of fashionistas, was selected by Christian Dior to exclusively hydrate Diorsnow, a new line of skincare products launched earlier this year. The water, which is sourced at Iceland's 4,500-year-old Ölfus Spring, is pretty special. It's 100 percent green, completely sustainable and CarbonNeutral certified, which means it has a carbon footprint of zero. Here in the U.S., the water is distributed by Anheuser-Busch, which owns 20 percent of parent company Icelandic Water Holdings.

More Information and Photos of the Top 10 Bottled Waters