A couple of weeks ago, I came across a most galvanizing article by Niklas Maak - a writer and arts editor for the Frankfurter Allgemeine Zeitung. The text entitled 'Goodbye Retro-Futurism' read beautifully about the topic - the trend in the creative arts showing the influence of depictions of the future. The article claims retro-futurism is dead and this brought about the realization I was not in fact ready to say 'goodbye' to this optimistic, oddly nostalgic and sometimes unrealistic way of seeing our future.

Retro-futuristic buildings have always been a soft spot not only for me, but also for most people involved with architecture. I cannot really think of a better explanation for this than what Nicolai Ouroussoff said in 'Future Vision Banished to the Past' ardently opposing the proposed demolition of Nakagin Capsule Tower:

like all great buildings, it is the crystallization of a far-reaching cultural ideal. Its existence also stands as a powerful reminder of paths not taken, of the possibility of worlds shaped by different sets of values.

There is a certain quality about the 60s dream of the future that strikes a chord in everyone's heart. The melancholy and beauty of these dreamlike creations have survived not only in architecture, but also in fashion, product design and - most vividly so - in cinema. It is through cinema that the unique feel of this nostalgic breed of buildings could be experienced with the most powerful effect. See some examples in the slideshow and the text below.

The fatal attraction of solemnly marching to work in Gattaca Corporation's Headquarters or scouting the highly dystopian 'Underground Maze' in Aeon Flux's utopian city of Bregna is undeniable. 'Gattaca' director Andrew M. Niccol provides us with a certain insight into retro-futurism's implications outside architectural theory:

This was Frank Lloyd Wright's last building. The great thing about the 1950s when this was built was that in this period when everyone was optimistic about the future, it was going to be wonderful. There is a triumphant, almost heroic look to the building. It's almost entirely made up of curves... To imagine this world that is so pristine, there should be no corners.

Why is the distant utopia that retro-futurism promised us irrevocably lost just half a century later? Further quoting Niklas Maak it is true that:

Anyone looking for a laugh in the 80s merely had to pull out a couple of those old magazines from the '50s in which draftsmen and technicians imagined what life would look like in the future: houses on the moon, their gardens under glass domes; flashing robots cleaning the coffee table and wiping dust off the leaves of the rubber tree in the corner; sleek cars, flying vehicles with motors powered by small atomic reactors.

Looking back now it is interesting to note how these laughable ideas in the 80s maybe don't seem so ridiculous - many of us live our lives online, connected to the web, some drive electric cars (but not yet ones that can fly!) and others live in self-sustaining buildings. Perhaps it is time to take retro-futurism seriously?

Does looking at the above buildings - and scenarios that they stage - provide us with any agenda or recipe for the future? Do you think some of the 60s futuristic ideals could still come to life in our future or has it already? For me, the ideas that retro-futurism offer are not just light entertainment and special effects - I see ideas hidden in amongst these visions for the future that have happened, that might happen, that are hopeful and worrying too; for me this is the value of bringing these ideas to life on-screen and in front of the masses. 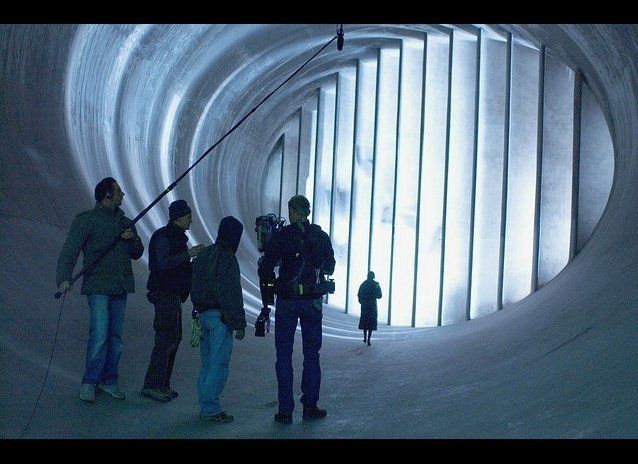 1 / 10
Trudelturm Wind Tunnel - Aeon Flux
For more information & images, <a href="http://openbuildings.com/buildings/trudelturm-wind-tunnel-profile-39462" target="_hplink">CLICK HERE.</a> <a href="http://blog.ounodesign.com/2009/06/24/architecture-in-the-movies-part-4-aeon-flux/" target="_hplink">Berlin’s modernist and contemporary architecture stands in for Aeon Flux‘s fictional city of Bregna in the year 2415 with surprisingly little alteration.</a> The now disused 1935 Berlin Windkanal or aerodynamic testing windtunnel for German aircraft, built in 1932 and now designated a technical landmark stands in for the “maze” and government complex in the film. Image: <a href="http://www.flickr.com/photos/ouno/3644892791/" target="_hplink">flickr user: ouno design</a>