Americans eat tens of millions of turkeys each year on Thanksgiving... but what the heck is a turkey really? It's a heckuva of strange bird, isn't it? Here in Davis, CA we have a huge population of wild turkeys too (see pic below from here in Davis) in addition to the store kind.

10. The bird "turkey" actually is named after the country Turkey. Who'd have thunk it? Reportedly, Europeans mistakenly thought the turkeys they saw in America were Guineafowl, also known as turkey fowl in Europe because, get this, they had been imported from the country Turkey to Central Europe. Then again they also thought America was Asia.

9. Strangely, in many countries/languages (not just in English), turkeys are called by the names of other countries. For example, in Portuguese, a turkey is called peru, named after the country Peru. In Greece they call turkeys "French birds".

For all the wonderfully interesting names that turkeys are called around the world including "fire chicken" (love it) and "seven-faced bird" check this out. 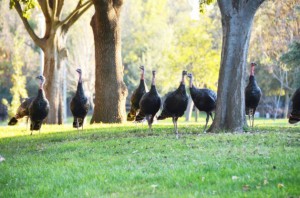 8. That distinctive waddle of turkeys is an example of nature's propensity to multitask. It is used both as an air conditioner for the turkey on hot days when the blood-filled waddle cools off. In addition it is used as a display. I was clueless to the fact that some women refer to their own or one another's necks pejoratively as "turkey waddle". Ugh.

7. Benjamin Franklin would have preferred the turkey to be America's official bird rather than the bald eagle, which Franklin felt had a "bad character".

6. The wishbone that so many of us break on Thanksgiving vying for luck is actually called "furcula" (little fork). Why do they have these bones? The furcula is thought at least in part to store energy during flight during a half wing stroke and then release it back.

5. Turkeys have a tail that is considered a delicacy in many countries. The turkey tail is very fatty and a single turkey tail can have up to 200 calories (almost all from fat) depending on size!

4. Wild turkeys are powerful and dramatically different than domestic. A wild turkey can run up to 25 mph (faster than Usain Bolt over a full 100 meters) and fly up to 55 mph. Domestic birds are sadly more akin to a blob and cannot even fly. But don't piss off a wild turkey!

3. Young male and female turkeys are called jakes and jennies. They grow up to be toms and hens.

2. The turkey and the octopus have something interesting in common. They both change color depending on their emotions! Turkey heads can be red, white, pink, blue, or gray.

1. There are an estimated 10 million wild turkeys in America in every state except Alaska and Hawaii.