Sustainability is no longer just a trend, a buzz word or even a preference, when it comes to architecture and design. It's the standard. It's vital. And this "greening" of cities continues to take new, exciting forms, as well as adopt old ones.

Consider green or "living" roofs. Forward-thinking Germany (where reportedly 10% of roofs are green) led the pack in the 1960s, and the trend spread throughout Europe. And why wouldn't it, when you think of the advantages? Lower heating and cooling costs, the ability to pull pollution from the air, and increased real estate values and the creation of intimate spaces in the environment are just a few. And, well, what's more aesthetically pleasing--a concrete expanse or a lush landscape? Green roofs can be minimalist, dramatic, landscaped or wild.

America is finally, gradually catching on to not just the functional importance but also the beauty of green roofs. My home city, Chicago, was instrumental in this. In 2001, Mayor Daley had a 20,300-square-foot green roof installed atop City Hall as part of his Urban Heat Island Initiative. This move saved $5,000 in energy costs each year and started a precedent for the city. Millennium Park, though not often thought of as a green roof, is a 24 ½-acre urban design Mecca that tops two underground parking garages and rail lines, making it indeed just that--a green roof (and a spectacular one, to boot). Chicago is now home to more green roofs than any other city in the U.S.

I was fortunate enough to lead our firm's Branded Environments team, in collaboration with our architectural practice, on one of our largest projects with long-term client Haworth. The company's Holland, Michigan headquarters and manufacturing facility achieved LEED Gold certification for a total renovation that featured a spectacular, sloping green roof. This aspect not only aligned with the company's sustainability platform, it made (and continues to make) a lasting impression on visitors and employees alike. Green roofs are changing the face, form and function of design. Take a look at nine other green roofs that have inspired me. 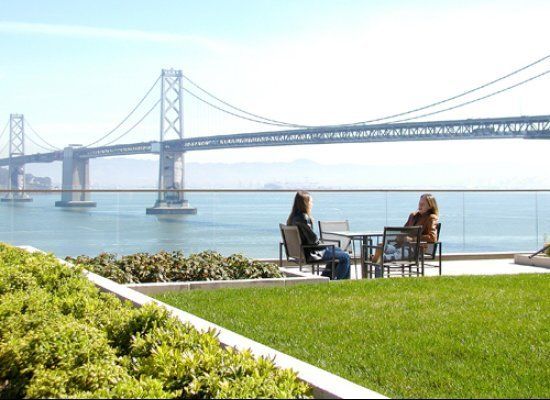