Originally a skill taught in culinary schools, the art of ice carving has moved out of the kitchen to the great outdoors.

Throughout the northern hemisphere, teams of ice and snow sculpture artists from around the world come together to compete in sculpting events with the resulting artworks put on display for the rest of us to enjoy.

These frozen works of art are carved from solid blocks of ice and snow by a variety of tools including chisels, handsaws and even chainsaws.

Pay a visit to one of Cheapflights.com's 10 picks of incredible Ice and Snow Festivals and experience the frozen magic for yourself.

See, winter can be fun!

Teams travel to Siberia's third largest city from the U.S., Latvia, China, Japan and Kazakhstan to compete in both the snow and ice categories.

This year's theme, "Magic ice of Siberia," will see the creations of fortresses, labyrinths and mythical scenes. Guests can try their hand at snow and ice carving with special expert-led workshops. 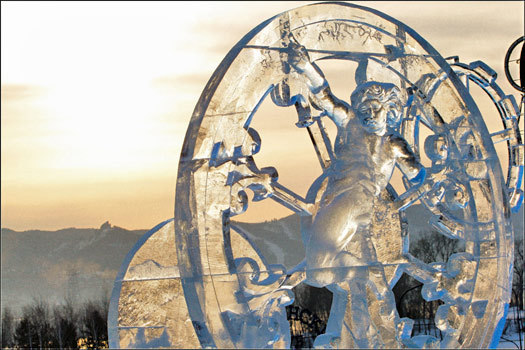 The chainsaws and chisels fire up on January 23, kicking off 10 days of outdoor art, music, food and fun at Alberta, Canada's Ice on Whyte Festival.

Ice-carving artists from as far as Russia, Latvia, Lithuania, New Zealand, the Netherlands and Malaysia compete against local teams, making their way through more than 500 blocks of ice weighing 154,764 pounds. 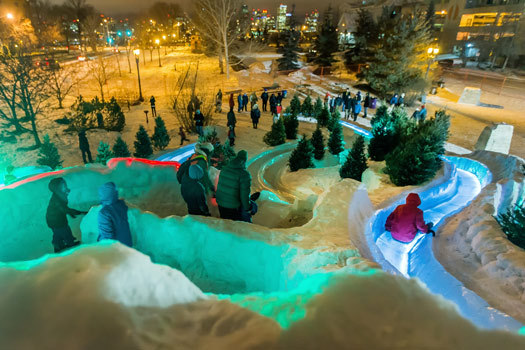 From its humble beginnings in 1990 where six snow statues made by local high school students attracted some 50,000 spectators, the Sapporo Snow Festival in Hokkaido, Japan was a surprise hit.

Today, the event welcomes more than two million guests each year who come to marvel at the nearly 200 sculptures made from enough snow to fill 6,500 five-ton trucks!

Top tips for the Sapporo Snow Festival: Keep a pack of tissues handy, buy a disposable hand warmer called a kairo and stock up on official Snow Festival souvenirs. 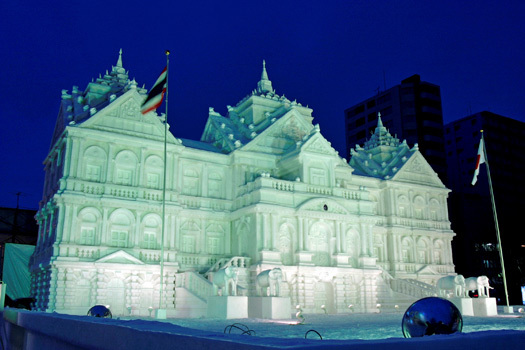 The granddaddy of all frozen events, the Harbin International Ice and Snow Sculpture Festival is the largest of its kind in the world.

The Festival's origins date all the way back to 1963, when it started life as a traditional lantern and garden party before transforming into the extravagant event we see today.

The sculptures are carved from giant blocks of ice taken directly from the frozen surface of the Songhua River.

If you've had your fill of frozen wonders, there are a bunch of winter activities to try such as skiing, snowboarding and skating. 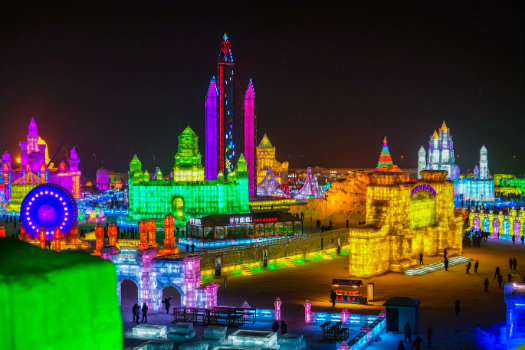 There are 16 teams made up of four artists from 10 different countries including Mongolia, Germany, Ukraine, Mexico, China, Argentina, Lithuania, Spain, France and the United States.

Each team is given a 12-foot high, 40,000-pound block of snow to start with and has 65 hours to complete their masterpiece. 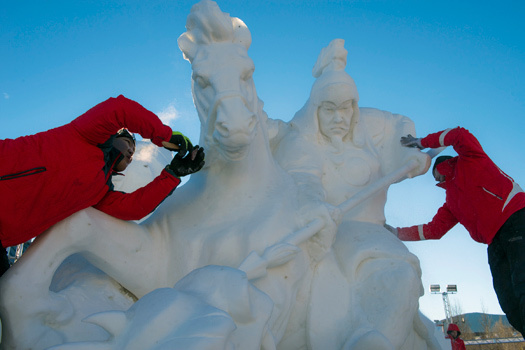 The magic of ice and snow!

Held over two weeks - the first dedicated to ice, the second to snow - the French ski resort of Valloire comes alive with music, lights and plenty of the frozen, pretty stuff during the Concours International de Sculpture sur Glace et sure Neige, which is now in its 24th year. 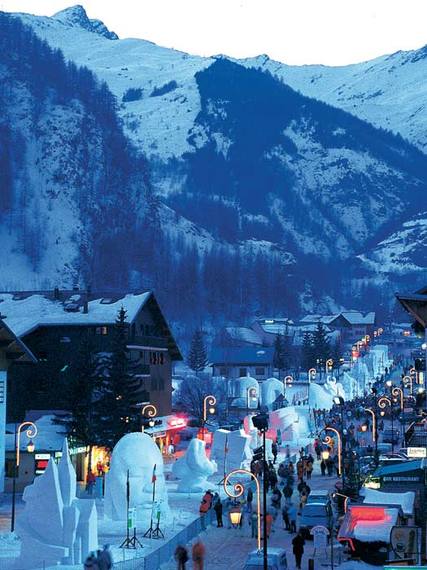 In the central Latvian town of Jelgava, 30 sculptors from eight countries will create frozen sculptures in the theme of an Ice Fairy Tale.

Now in its 17th year, this festival draws thousands of people from across the country come to see the sculptures shine in colorful spotlights at the International Ice Sculpture Festival.

For adults there's the added fun of an ice bar and, for the kids, an ice slide.

Founded in April 1990, the World Ice Art Championships in Fairbank, Alaska, has grown from a week-long, eight-team competition to a month-long event featuring 70 teams of expert carvers.

Run by a team of more than 300 volunteers, the Championships brings 45,000 visitors to the town.

One major draw is the Frozen Kids Park, which is like any other playground except it is constructed entirely from ice with slides, rides and mazes! 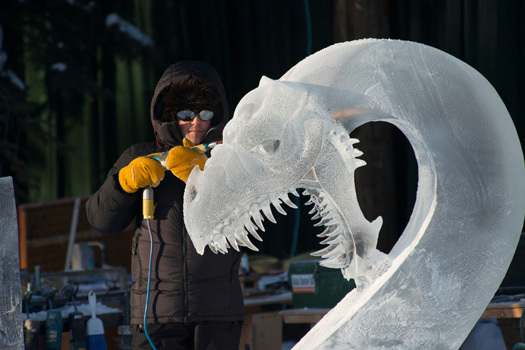 The capital and largest community in the Northwest Territories, Yellowknife, hosts the annual Snowking event, which is a month long community celebration.

Each March, a winter wonderland is created on Yellowknife Bay with the creation of the legendary Snowcastle.

Built from the ice and snow of Great Slave Lake, the Snowcastle is the centerpiece of the Snowking calendar, celebrating arts and culture and showing-off all that Yellowknife has to offer. 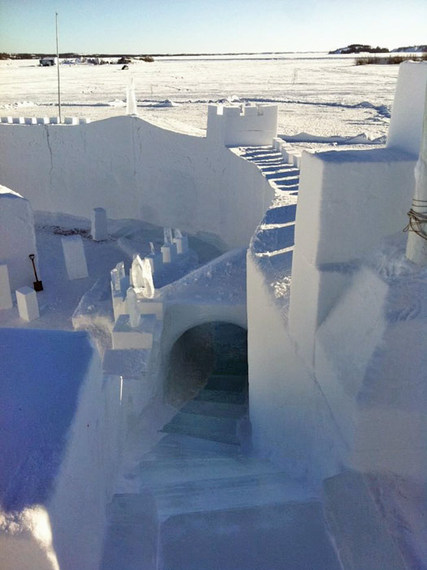 Trust the residents of frozen northern Norway to take ice festivals to a whole new level!

Each year under the full moon, the tiny town of Geilo hosts a unique artistic event - the Ice Music Festival where all the instruments are made from ice just hours before each concert!

Listen to folk, jazz, contemporary, "electronic"-style music and even the sounds of Africa, performed on icy chimes, glockenspiel, cello, horn and harp.

Concerts are held in a variety of venues, but one event is more extreme than the others. Held at the stroke of midnight, it is accessible only by ski and takes place in an actual Viking gravesite! 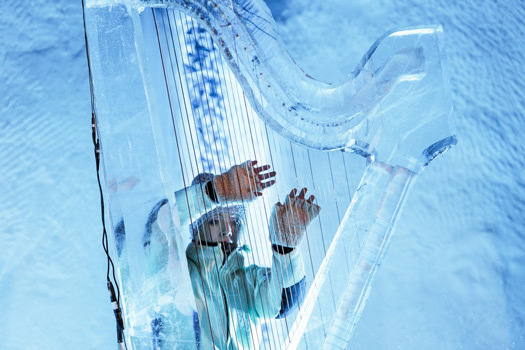