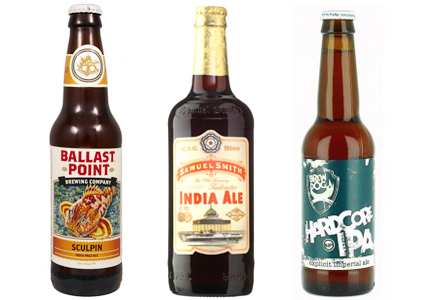 India Pale Ales trace their origins back to the days of the British Empire, when brewers would fortify their beers with hops to naturally preserve them during the long voyage to South Asia. Today's brews have taken the hop-heavy formula even further, adding more of the bitter flower for a truly potent punch. Our favorite IPAs stay true to the original spirit of the ale while forging their own assertive flavors with carefully crafted recipes and forward-thinking techniques. Take a look at GAYOT's top five IPAs to discover classic British beers and bold American variations.

Ballast Point has been manufacturing this IPA since it was limited to the back of the company's brewing supply store in San Diego. The now-booming brewery named its flagship India Pale Ale for a fish that wouldn't win any beauty contests. Covered in sharp, poisonous spines, the sculpin nevertheless yields delicious flavor. The golden beer offers the same dichotomy, with a bitter hop punch balanced by refreshing tropical fruit notes. Sculpin IPA has proven so popular that Ballast Point now offers variations with grapefruit, habanero and coffee.

This traditional IPA is 100 percent English. It's brewed with water from the original well at the Old Tadcaster Brewery, which dates back to 1758. It also utilizes English-grown malted barley and hops, and it's fermented in classic stone Yorkshire squares. At only 5 percent ABV with a 46 IBU count, this brew is quite sessionable and pours an apricot color with an earthy and caramel aroma. While the flavor is hop-forward, it doesn't approach that of its American cousins.

Bay Area beer titan Vinnie Cilurzo created Russian River Brewing's first double IPA in 2000 for friend Vic Kralj, who owns The Bistro in nearby Hayward and was hosting the inaugural Double IPA Festival. Cilurzo named the bold beer for Pliny the Elder, who is credited with first writing about Lupus salictarius, otherwise known as hops. This cloudy, copper-hued, well-balanced beer is crafted with Amarillo, Centennial, CTZ and Simcoe hops, and has an enticing aroma, reminiscent of a pine forest. Pliny the Elder succumbed in heroic fashion while rescuing friends during the eruption of Mt. Vesuvius in 79 A.D.; you can now drink like a hero with Russian River's iconic IPA.

Scotland's BrewDog has made a name for itself by creating bold, record-setting beers that push the limits of conventional brewing, and at 150 IBUs, Hardcore IPA is certainly no different. Marrying American whole-flower Centennial, Columbus and Simcoe hops with Maris Otter English two-row barley, the ale matches toffee malt notes with a blast of citrusy hop flavor. The award-winning Imperial IPA took the gold medal at the 2010 World Beer Cup.

Alpine Beer, San Diego's limited distribution darling, received a boost when Green Flash Brewing Company purchased the business in 2014. That means a wider audience for Alpine's beloved ales, including Nelson. This golden IPA is made with rye grains and a one-two punch of Nelson Sauvin and Southern Cross hops from New Zealand. The result is a musty beer with pronounced grapefruit notes and a spicy body thanks to the use of European rye grains.