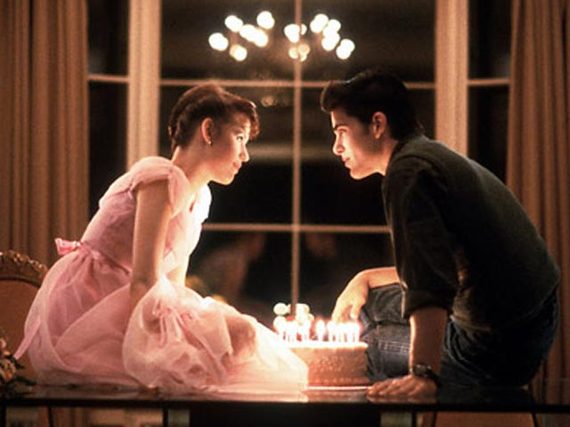 This week marks the 30th (!) anniversary of Sixteen Candles, one of the greatest teen movies of all time (right next to John Hughes' other classic, The Breakfast Club). At a time when most high school/college movies were raunchy, sexist tales of young men's pursuit of sexual conquests -- think the Porky's franchise, Losing It, The Last American Virgin, Class, Revenge of the Nerds, etc. -- Hughes upended the genre by focusing on romance and the female perspective (e.g. the obligatory secret shower scene is from Sam and her friend's POV). And while some of the politically insensitive aspects of the film certainly don't fly today (the racist portrayal of Asians, the drunk driving, all the date-rape-y stuff), it still holds up as a realistic portrayal of love and longing in the time of hormones and high school -- and serves as a guide for young people navigating the world of sex and romance:

1. It's worth it to set high standards for yourself when it comes to ideal partners -- you actually have a chance, even if you feel like a snowball in hell (Sam crushing on Jake, The Geek crushing on Caroline).

2. Teenage boys aren't interested solely in sex: they're just as interested in relationships as girls are. Neither gender should buy into the macho stereotype.

3. Don't get so wasted that you can't remember whether or not you had sex (i.e. date raped someone OR got date raped) the night before -- we're talking to you Caroline and Farmer Ted.

4. At 16, you should have a decent understanding of reproduction, intercourse, and safer sex to be able to answer the question "Have you ever done it?" confidently and accurately (e.g. "I don't think so" should not be an option).

5. Never do sexual charity work, i.e. giving your underpants to someone out of pity so they can pretend they hooked up with you.

6. Don't return someone's panties to them as a romantic gesture, especially at the dinner table -- it's not romantic, it's creepy.

7. Violating your passed-out girlfriend ten different ways is not a hilarious, enviable option -- it's rape.

8. If you need to take four muscle relaxers to get through your period and/or your wedding, you should probably go see a doctor and/or not get married.

9. "That's why they call them crushes. If they were easy, they'd call 'em something else." -- words of wisdom spoken by Sam's awesome dad.

MORE LIKE THIS ON EMandLO.com:
- Top 10 Sex and Relationship Tips from "The Breakfast Club"
- Sex and Dating Advice from Matthew McConaughey's Roles
- Everyone You've Ever Dated, By Oscar-Nominated Roles