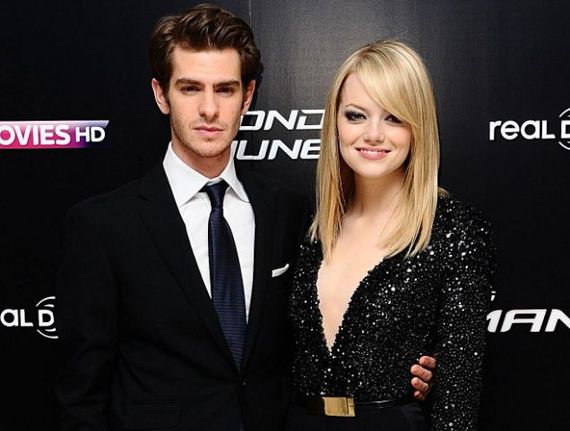 Emma Stone went viral this week when she called out her boyfriend, Andrew Garfield, for his casual sexism during a Q&A session promoting The Amazing Spider-Man 2. When a little boy asked Garfield how Spider-Man got his costume, he said: "He made it. He made it with his bare hands. He sewed it... It's kind of a feminine thing to do, but he really made a very masculine costume." At which point Stone said, "It's feminine, how?" Garfield then stumbled and blushed and before eventually settling on the idea that, "We all have feminine in us, young men."

"All men should be feminists. If men care about women's rights the world will be a better place. We are better off when women are empowered, it leads to a better society."

"My mom brought me up to be a feminist. She would always point out to my brother and me that our culture does often portray women like objects. For example, we would always watch Lakers games as a family, but my mom would always point out every time the cheerleaders come on, 'Okay, so look, here's the story that gets told: The men get to be the heroic skilled athletes and the women just get to be pretty.' She didn't mean any offense to any individual woman who was working as a cheerleader, but she wanted me and my brother to be aware of it because we see these images on TV, in the movies, and on magazines all the time. And if you don't stop and think about it, it just sort of seeps into your brain and that becomes the way you perceive reality. I do call myself a feminist. Absolutely! It's worth paying attention to the roles that are sort of dictated to us and that we don't have to fit into those roles. We can be anybody we wanna be."

"When you work with the sort of really strong women that I work with, the idea that anyone would want to make [reproductive] decisions for them is hard to wrap your head around."

"When women are empowered, they immeasurably improve the lives of everyone around them -- their families, their communities, and their countries. This is not just about women, we men need to recognize the part we play too. Real men treat women with dignity and give them the respect they deserve."

"I'm constantly annoyed [by] how terribly written most females are in most everything -- and especially in comedy. Their anatomy seems to be the only defining aspect of their character, and I just find that untruthful and it straight-up offends me. A lot of the strongest people I know are chicks. And as a viewer, I get a kick out of watching real characters. So I take it upon myself to clean that shit up and write actual women. And I like writing strong women, because as a straight male, there's nothing more attractive to me than a strong girl."

"I think there's so much that's not said about sex in our country, even from an educational level... the one thing they teach about is how to get pregnant or how to not get pregnant, but they don't really talk about sex as a point of pleasure for women. That creates a place where women aren't empowered around their own sexuality and their own sexual selves."

"When I heard the story [of my mother's illegal abortion] I was aghast by the lowliness of a society that would make a woman do that. I could not understand its lack of humanity; today is no different. What happened to my mother was a relic of an America that was not free nor equal nor very kind. My mother's illegal abortion marked a time in America that we have worked long and hard to leave behind. It was a time when women were seen as second rate citizens who were not smart enough, nor responsible enough, nor capable enough to make decisions about their lives. It was a time that deserved to be left behind, and leave it behind we did, or so it seemed. We made abortion and a woman's ability to be her own master a Right. That Right was codified into law. That law was the law of the land for decades. My own mother fought to make herself more than a possession; she lived her life as a mother who chose when she would have children, and a wife who could earn a living if she so chose. I want my daughters to enjoy that same choice. I don't want to turn back the hands of time to when women shuttled across state lines in the thick of night to resolve an unwanted pregnancy, in a cheap hotel room just south of the state line. Where a transaction of $600 cash becomes the worth of a young woman's life."

"[I write strong women characters] because of my mother. She really was an extraordinary, inspirational, tough, cool, sexy, funny woman. And that's the kind of woman I've always surrounded myself with, my friends and particularly my wife, who is not only smarter than and stronger than I am, but occasionally taller too. I think it also goes back to my father and my stepfather, because they prized wit and resolve in the women they were with above all things and they were among the rare men who understood that recognizing someone else's power doesn't diminish your own."

MORE LIKE THIS ON EMandLO.com:
- Our Favorite #MensRightsMovies on Twitter
- A Feminist Defense of Juan Pablo
- Which Disney Princess Are You Really?