If you're in the market for a new place and are looking to rent, the cities in which you're searching can make a big difference on the amount you shell out each month.

Zumper, an apartment rental website, says the median rent for a one-bedroom apartment in Illinois is $1,090 as of October. The report also shows which cities currently have the most and least expensive rental markets.

Considering cost-of-living, it's no surprise renters are paying the most in Chicago and the surrounding suburbs. In Chicago, the median rent for a one-bedroom apartment is $1,980, nearly $900 more than the statewide median. Compared to the rest of the U.S., that's the seventh most expensive rental market. 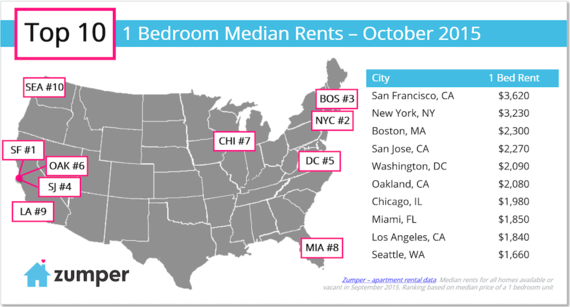 Seven of the ten most populous cities in Illinois have rents below the state median's, so affordability does exist in the larger regions here.

Here are the Top 10 cities in Illinois with the most and least expensive rental markets.