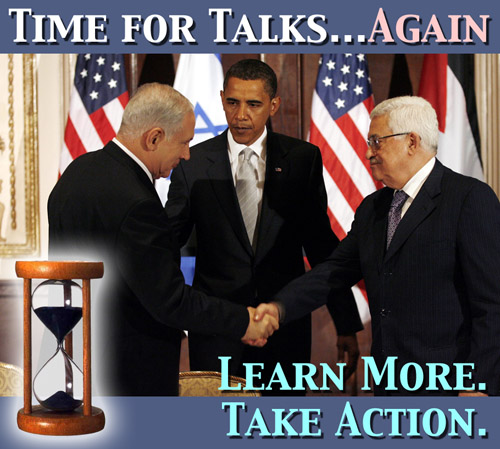 On August 20, the Obama Administration announced that it will reconvene under its auspices direct Israeli-Palestinian peace negotiations beginning on September 2.

While a just and lasting Israeli-Palestinian peace is in everyone's interest, there are profound reasons to be skeptical about the likelihood of success for the following reasons (not necessarily listed in order of importance):

1. No more photo-ops, please. There is a desperate need for a just, comprehensive and lasting peace in the Middle East. Negotiations can be a key to that. But the last thing Palestinians and Israelis need are phony negotiations. They only breed disillusionment, resentment, and cynicism about the possibility of Israeli-Palestinian peace based on human rights and justice. So rather than enter into negotiations for the sake of negotiations, the Obama Administration should exert real political pressure on Israel by cutting off military aid to once and for all get it to commit to dismantling its regime of occupation and apartheid against Palestinians, and make clear that the framework for all negotiations will be based on international law, human rights, and UN resolutions. As long as it fails to do so, U.S. civil society must keep up the pressure through campaigns of boycott, divestment, and sanctions (BDS) to change these dynamics and by joining up with the US Campaign to End the Israeli Occupation.

2. The United States is not evenhanded. For decades, the United States has arrogated the role of convening Israeli-Palestinian negotiations. To convince the world that it is suitable to play this role, the United States declares that it is evenhanded, when it in fact arms Israel to the teeth and is aware that Israel will employ these U.S. weapons to conduct its human rights abuses of and apartheid policies toward Palestinians. Under international law, an outside party that provides weapons to a party in an armed conflict violates laws of neutrality. The United States is scheduled to provide Israel with $30 billion in weapons from 2009-2018 (part and parcel of a broader strategy to further militarize the region with an additional $60 billion in weapons sales to Gulf States). The United States cannot credibly broker Israeli-Palestinian peace while bankrolling Israel's military machine and simultaneously ignoring Israel's human rights violations.

4. Negotiations supersede accountability. The Obama Administration, building on decades of previous U.S. efforts to shield Israel from accountability, has worked actively to scuttle international attempts to hold Israel accountable for its previous violations of international law and human rights, and its commission of war crimes and possible crimes against humanity. Both after the Goldstone Report and Israel's attack on the Gaza Freedom Flotilla, the United States used its leverage at the United Nations to prevent Israel from being held accountable, arguing that accountability undermines prospects for peace negotiations. On the contrary, for peace negotiations to be successful, Israel must be held accountable for its actions and shown that it will pay a price for its illegal policies. Otherwise, it has no reason to alter its behavior.

5. No terms of reference. In his August 20 press briefing, Special Envoy for Middle East Peace George Mitchell confirmed that the United States is not insisting on any guiding principles for the negotiations, or "terms of references" in diplomatic parlance, and that these terms will be worked out by the parties themselves. In other words, Israel will be free to marshal its overwhelming power to refuse to negotiate on the basis of human rights, international law, and UN resolutions, the only viable basis for a just and lasting Israeli-Palestinian peace. Instead, Israel--backed by the United States--will negotiate based on its own exclusive terms of reference, namely what is in Israel's "security interests." As in previous failed rounds of negotiations, Palestinian rights will not enter into the conversation.

6. No timeline. Secretary of State Hillary Clinton believes that negotiations "could" be concluded within a year. Of course, successful Israeli-Palestinian negotiations could be wrapped up within in a year. In contrast to "peace process industry" pundits, there is nothing intrinsically complex or complicated about resolving the Israeli-Palestinian conflict if Israel were to negotiate in good faith by declaring an end to its policies of occupation and apartheid against Palestinians. After all, South Africa concluded negotiations to end apartheid within a few months once the decision had been made to transition to democracy. However, Israel has given no indication whatsoever that it is prepared to alter its policies toward Palestinians, setting the stage for prolonged and fruitless negotiations.

7. Can a leopard change its spots? A recently-leaked video from 2001 shows current Israeli Prime Minister Benjamin Netanyahu arrogantly bragging that "I actually stopped the Oslo Accord [shorthand for the failed 1993-2000 Israeli-Palestinian "peace process']." (The Institute for Middle East Understanding has provided a useful translation and transcript of the video here.) His current Foreign Minister, Avigdor Leiberman, lives in an illegal Israeli colony built on stolen Palestinian land and has openly declared his support for ethnic cleansing of Palestinians. With this negotiating team in place, how can Palestinians expect even a bare modicum of fairness and justice to emerge from these negotiations?

8. Increased U.S. military aid to and cooperation with Israel make it less likely to negotiate in good faith. In July, Assistant Secretary of State for Political-Military Affairs Andrew Shapiro told the Brookings Institution that "I'm proud to say that as a result of this commitment [to Israel's security], our security relationship with Israel is broader, deeper, and more intense than ever before." Indeed, it is. President Obama has requested record-breaking levels of military aid to Israel, and stepped up joint U.S.-Israeli military projects, such as the missile defense system "Iron Dome." This increased level of military aid only makes Israel more reliant on military might in its attempt to subdue Palestinians into submission, and less likely to negotiate with them fairly as equals.

9. All the parties are not at the negotiating table. Special Envoy for Middle East Peace George Mitchell, who previously brokered a peace agreement in Northern Ireland, when discussing its success often referred to the necessity of having all the parties to the conflict around the negotiating table. What held true though for negotiations in Northern Ireland, apparently doesn't apply to Israel/Palestine since Hamas, which currently governs the Israeli-occupied and -besieged Gaza Strip and legitimately won the 2006 legislative elections held at the behest of the United States, was not invited to participate in the negotiations. If, by some long-shot, an agreement were to emerge from these negotiations, it is difficult to see how it would be implemented without having Hamas as part of the discussions.

10. Negotiations help Israel mitigate its growing international isolation. Last, but certainly not least, images of Israeli and Palestinian political leaders negotiating presents the world with a false sense of normalcy and allows Israel the opportunity to state that it is making a legitimate effort to achieve peace. With Israel as the party pressing for direct negotiations, it is quite transparent that its desire for these talks has more to do with easing its growing international isolation and defusing the energy from the international movement for boycott, divestment, and sanctions (BDS), rather than with genuinely negotiating a just and lasting peace. This point brings the analysis full circle: advocates for changing U.S. policy toward Israel/Palestine to support human rights, international law, and equality should not be lulled into complacency by the resumption of negotiations, but need to keep up the pressure with campaigns of BDS to change the dynamics that will eventually lead to the possibility of a just and lasting peace.

Sign a petition to the Obama Administration, which states that Israeli-Palestinian negotiations must be based on human rights, international law, and UN resolutions to be successful by clicking here.