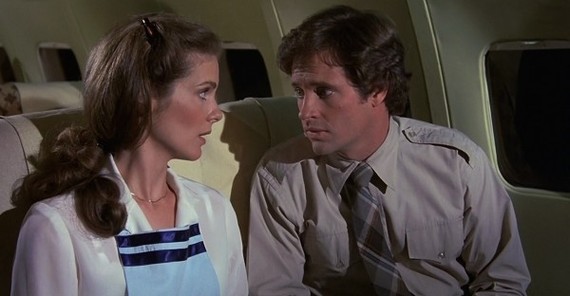 Earlier this week we celebrated the 35th anniversary of the movie Airplane! with 35 little known facts about the classic comedy. Today, because Airplane! is pretty much the most quotable movie in the entire history of movies, we offer you ten sex and dating tips via some of the film's most (in)famous lines:

1. R-E-S-P-E-C-T, Find Out What It Means to Your Partner
Elaine: It takes so many things to make love last. But most of all, it takes respect, and I can't live with a man I don't respect.

Ted Striker: [turns to camera] What a pisser!

Rumack: We're going to make it, you've got to believe that.

[a woman passenger comes in]

Mrs. Hammen: Dr. Rumack, do you have any idea when we'll be landing?

Rumack: Pretty soon, how are you bearing up?

Mrs. Hammen: Well, to be honest, I've never been so scared. But at least I have a husband.

3. If You Want to Talk Dirty, Make Sure Your Audience is "On Board"
Captain Oveur: You ever been in a cockpit before?

Joey: No sir, I've never been up in a plane before.

Captain Oveur: You ever seen a grown man naked?

4. Heartbreak Can Exacerbate Addiction
Ted Striker: It was at that moment that I first realized Elaine had doubts about our relationship. And that, as much as anything else, led to my drinking problem. [Pours drink over face].

5. Beware the Guy Who Wants to See a Gladiators Movie on a First Date
Captain Oveur: Joey, do you like movies about gladiators?

6. Virginity Is Nothing to Be Embarrassed About. Ditto Feeling Nervous in Bed
Hanging Lady: Nervous?

Ted Striker: No, I've been nervous lots of times.

7. Wash All Digits and Other Poking Items Before Moving from One Orifice to Another
Rex Kramer: Get that finger out of your ear! You don't know where that finger's been!

8. Discuss Birth Control Options Before You Have Sex
Male announcer: The red zone is for immediate loading and unloading of passengers only. There is no stopping in the white zone.

Female announcer: No, the white zone is for loading of passengers and there is no stopping in a RED zone.

Male announcer: The red zone has always been for loading and unloading of passengers. There's never stopping in a white zone.

Male announcer: There's just no stopping in a white zone.

Female announcer: Oh really, Vernon? Why pretend, we both know perfectly well what this is about. You want me to have an abortion.

Male announcer: It's really the only sensible thing to do, if it's done safely. Therapeutically there's no danger involved.

9. To Cheat, Or Not to Cheat: It's a Clear Moral Choice
First Jive Dude: Shiiiiit, maaaaan. That honky muf' be messin' mah old lady... got to be runnin' cold upside down his head, you know?

[Subtitle: GOLLY, THAT WHITE FELLOW SHOULD STAY AWAY FROM MY WIFE OR I WILL PUNCH HIM]

Second Jive Dude: Hey home', I can dig it. Know ain't gonna lay no mo' big rap up on you, man!

[Subtitle: YES, HE IS WRONG FOR DOING THAT]

[Subtitle: I KNEW A MAN IN A SIMILAR PREDICAMENT, AND HE ENDED UP BEING SORRY]

Second Jive Dude: Hey... knock a self a pro, Slick! That gray matter backlot perform us DOWN, I take TCB-in', man!

[Subtitle: DON'T BE NAIVE ARTHUR. EACH OF US FACES A CLEAR MORAL CHOICE]

10. It's Never Too Soon to Learn Proper Date Etiquette
Young Boy with Coffee: Excuse me, I happened to be passing, and I thought you might like some coffee.

Little Girl: No, thank you, I take it black, like my men.

Want the inside scoop on this movie's anniversary?

Airplane Is 35. Shirley You Can't Be Serious?