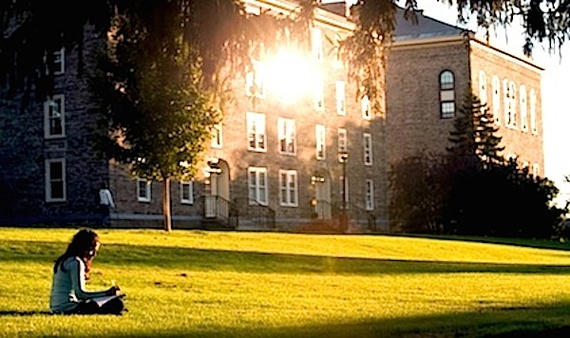 For many young women and men, the end of August marks the start of a new chapter of life -- one of higher learning, critical thinking, problem solving, horizon broadening, and lots and lots of casual bonking. It's a whole new world of unchaperoned independence and freedom combined with 18-year-old hormones -- which can result in a lot of really bad life decisions. If you are the kind of wise-beyond-your-years person who only has sober sex with people you're in a committed relationship with, more power to you! If not, follow these rules to save yourself from (at least some) sex-related humiliation and regret up in your ivory tower.

1. Keep your condom shelf fully stocked at all times. Whether you're a man or a woman, make sure you keep a healthy supply of condoms on hand, for you, for your friends, for friends of friends. Invest in decent ones, with lubrication (but not spermicide), because everyone could use a little rehydration after a night of drinking (and, good or bad, many of you will have been drinking... heavily -- see tip #3). Replace the condoms when they get close to their expiration date -- because the only thing worse than not having a condom is having one that breaks mid sesh.

2. Carry a condom on you at all times. Do you see a theme here? (And we don't want to hear about how we're living in a "post-AIDs/HPV-vaccine world" in which condoms are no longer a requirement; STDs still exist!) You never know when nookie is around the corner, especially on nights out. Keep a condom (more if you can manage it) cool and dry in a purse or loose pocket, not crammed in an overstuffed wallet or squeezed into the back pocket of your skinny jeans.

3. Don't do it drunk. Chances are, you will get drunk. Too drunk. Way too drunk. Probably on more than one occasion. We're not talking about a good, healthy buzz -- because let's face it, that's the most likely time sex is going to happen for you this year -- no, we're talking completely sloshed. And when that happens, when your balance starts to fail and your voice gets really loud and the room spins a bit, try with all your might NOT to hook up. Have a friend or three on hand who've got your back (and will tell you when to "turn back/back off now"). Because the chances of it not going well are exceedingly high. Think: poor sexual performance, blackouts, accusations of date rape, actual date rape, mid-sesh vomiting, forgotten birth control, accidental pregnancy, viral videos, the list goes on.

4. Have a no hook-up zone. Ground zero is your dorm room and the zone radiates out from there. The closer anyone lives to ground zero, the less advised you are to hook up with them. So: students in other dorms = fair game. Students in same dorm = proceed with caution. Students on same floor = enter (or be entered) at your own risk. Immediate neighbors = turn back now! Roommate = NO!!! And while we're on the topic of roommates, have respect for yours -- don't keep locking them out while you're showing someone your dorm room etchings, especially on nights before exams.

5. Don't sleep with anyone to get them to like you. This will not work. Sleep with someone because you are attracted to them and would like to have sex now, but only if you can do so without any expectations of a future relationship. If you think sex tonight means you're dating tomorrow, think again.

6. Avoid having sex in a fraternity/sorority house. But especially a fraternity house. Because in close-knit community living like that there are no boundaries: people will walk in on you while you're doing it. Sometimes they'll stay. They might try to take pictures.

8. Be open and honest about STDs. You're jumping into a pool of smart, well educated, fun, attractive, decent people -- many of whom have sexually transmitted diseases. Hell, you probably have one right now too! There's nothing shameful about that -- it's just statistics. But that doesn't mean you can shirk your civic responsibility to be honest about anything you've got that might be transferrable -- oral herpes counts too! The more people talk about it, the less stigma there will be, and the smarter everyone can be about protecting themselves and the ones they lust.

9. Don't schtupp your professor. It's so cliche. The affair might feel naughty and transgressive, but ultimately it's an abuse of power on their part. Plus, it's not worth it for the inevitable mediocre B you'll get.

10. Get familiar with your health center, campus security, and your school's policy related to sexual assault. The health center is your friend: a good one will have free condoms, STD information and check-ups, Plan B and pregnancy tests. Familiarize yourself with campus security: put their number in your phone and memorize it, call them if you need to be picked up or any other kind of help, and know where all the emergency phones are on campus. Finally, now that schools are being forced to actually do something about the on-campus sexual assault epidemic (according to a 2007 study funded by the National Institute of Justice, one in five women will become the victim of an attempted or complete sexual assault during college), review your own school's current policy so you know your rights and whether you need to insist your school do more.

RELATED ARTICLES FROM EMandLO.com:
- 50 Shades of Play: A Guide to the Sex Toys in Fifty Shades of Grey
- Top 10 Most Underrated Sex Acts
- 10 Rules for Doing It in the Great Outdoors
- 5 Reasons to Have Sex with the Lights On