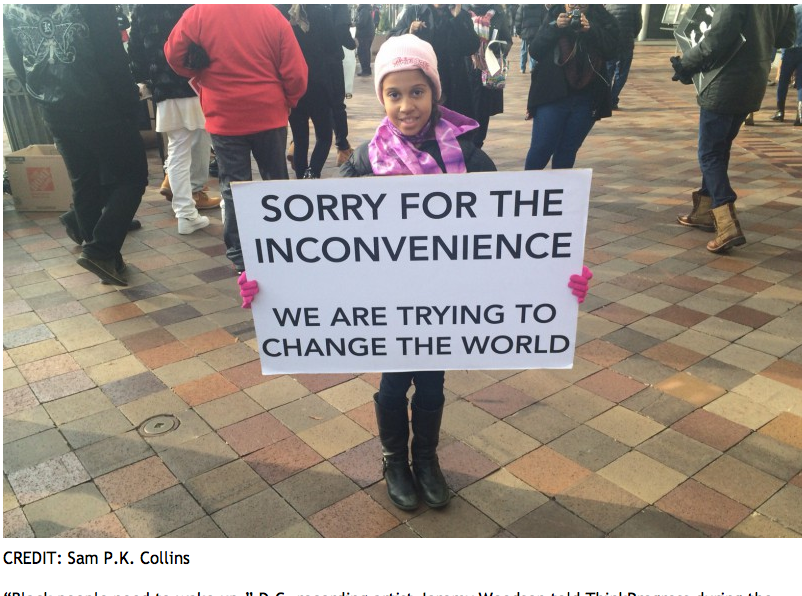 Social media is an activism platform yielding more value each day. In 1989, during a lecture, Noam Chomsky stated, "Look, the peace movement in the Sixties became a huge mass movement, with tens of millions of people involved: it began with people doing just what you said, inviting somebody to come talk in their living rooms... When the time is right, things happen fast." Comparing how quickly activists came together to form the Civil Rights and Anti-War movements in the '60s, to current sprouting social movements fueled by hashtags like #ICantBreathe, one can observe the exponential amplification value that social media serves in activism today.

Social media provides an open global community for citizens to have a voice and make an impact on social change in real time. To commemorate Human Rights Week (December 10-17) and International Human Solidarity Day (December 20), we revisited some of the most impactful social movements of 2014 that were simultaneously shared to social networks with hashtags we'll never forget. We, the people, have hashtagged.

On April 14, 2014, the Nigerian militant Islamist group Boko Haram kidnapped 276 school girls in the town of Chibok. "Boko Haram" translates to the unacceptance of Western education, and the group allegedly performed this act to showcase their beliefs of the place women should hold in society; working in the home and not attending school. As this occurred, the Twitter and Facebook spheres exploded with influencers and average joes holding up signs in a photograph with the hashtag "#BringBackOurGirls" on it. To date, there are still 219 girls in captivity. Despite this social media activism campaign going viral, did it, or will it, make an actual impact on bringing back the remaining 218 girls and stopping Boko Haram? - @SarinaPrimrose

On April 22, 2014, the New York Police Department sent out a tweet inviting people to share photos taken with officers, using the hashtag #MyNYPD. More than 70,000 New Yorkers responded on Twitter with graphic photos and videos of police officers engaging in violent behavior. Citizens of other major cities -- including Los Angeles, Denver and more -- joined in to create hashtags for their respective police departments, sharing an array of images depicting police brutality. The recurrent issue of police using excessive force against citizens sparked the #MillionsMarchNYC protests, happening right now in response to Eric Garner's unjust death in Staten Island. - @MsAnalogMedia

On July 17, 2014, Eric Garner -- an unarmed 43-year-old black man from Staten Island, N.Y. -- died from a chokehold at the hands of Daniel Pantaleo, a white police officer. Video footage of Garner struggling to say his last words, "I can't breathe," surfaced on the Internet, sparking public outrage. On December 3, the Staten Island grand jury decided against indicting Officer Pantaleo in Garner's death. Entertainers, pro athletes, and people around the world immediately fired back with social media posts using the hashtag #ICantBreathe and the recurrent #BlackLivesMatter -- representing a social movement that began in 2012 encouraging African-Americans to strive toward liberation from oppression. Today, peaceful protests continue around the country -- including #MillionsMarchNYC and #MansionShutdown -- involving supporters of all races joining together in solidarity. - @MsAnalogMedia

On September 8, 2014, Alicia Keys released the song, "We Are Here". She launched this to get fans and people around the world to voice why they are here, by posting a photo with a caption that says "I am here to..." and writing the hashtag "#WeAreHere" underneath. In all, her inspiration to create the #WeAreHere movement was to promote world peace and inspire people to speak up about the causes they care about. Influencers around the world participated; however, they spoke up about non-humanitarian things they are here for, too. Why are you here? Get in on the #WeAreHere hashtag. - @SarinaPrimrose

In September 2014, university students in Hong Kong took to the streets to peacefully protest the Chinese government's decision to vet all Chief Executive 2017 candidates. The Occupy Central group quickly joined them to ignite what was is known as the Umbrella Revolution. This movement has been constantly compared to the Tiananmen Square protest, and massacre, of 1989. The difference: social media and global news coverage provides second-by-second updates today, allowing the protesters to prove to the world their peaceful movement and rally remote support, too. - @SarinaPrimrose

On November 16, 2014, Anonymous -- the global hacktivist group promoting world peace -- launched a campaign against the notorious white supremacy group, the Ku Klux Klan (KKK). The KKK had allegedly threatened to use lethal force against peaceful protesters in Ferguson earlier that week. Anonymous responded. They first DDoS'd (distributed denial of service) KKK websites and hacked the "@KuKluxKlanUSA" Twitter account, posting a "You should've expected us" message addressed to Klan members. Then, Anonymous removed all "racist garbage" from the @KuKluxKlanUSA account. Finally, they organized a protest in Ferguson held December 6 in response to further threats from the KKK, and their extremely organized internet activism fight continues to this day in an effort to peacefully put an end to the KKK's existence. - @SarinaPrimrose

On September 8, 2014, video footage of former Baltimore Ravens football star Ray Rice assaulting his wife, Janay Rice, was made available to the public. Victims of domestic violence responded on Twitter with the hashtag #WhyIStayed. The conversation began with Beverly Gooden -- a domestic violence survivor and advocate -- who described in detail how difficult it was to leave her abusive partner. Gooden's goal to reverse victim-blaming inspired other women to come forward with traumatic stories, explaining why they stayed, followed by stories of hope with #WhyILeft. - @MsAnalogMedia

On November 24, 2014, Prosecuting Attorney Robert McCulloch announced that Ferguson, Missouri-based police officer Darren Wilson would not be indicted for the killing of unarmed 18-year-old Mike Brown. The country uproared on both sides of the coin instantaneously, and street protests, both peaceful and violent, set off instantly around the country in Ferguson, Los Angeles, San Francisco, New York, Detroit, and more. The music community, specifically the hip-hop community, had a lot to say to express their disappointment in the "#FergusonDecision". Some even produced songs to quickly voice their concern to fans and the world, peacefully. The response to Mike Brown's case has ignited a civil rights movement as intense as the one that occurred in the 1960s. Imagine if Martin Luther King Jr. and Rosa Parks had Twitter? - @SarinaPrimrose

From Folsom, CA, Sarina Larson is a California girl with a global perspective. She has lived in the Netherlands, Thailand, the U.S. and has traveled to 25 countries. She channels her inner humanitarian and social entrepreneur as a marketing consultant, co-Founder at BoostBlocks and co-Founder of the music centered non-profit, Bizlanthropy.

Tasha Mitchell is a Media Specialist with a decade of professional experience in branding and media relations. Tasha runs an integrated media company Analog Media that specializes in web design, social media marketing, e-newsletters, e-commerce, and more. When she's not working, she's networking at events, concerts and cafes - writing along the way. Her interests include arts and culture, social issues, and new media.