The trademark of an empath is that they feel and absorb other people's emotions and/or physical symptoms because of their high sensitivities. They filter the world through their intuition and have a difficult time intellectualizing their feelings.

As a psychiatrist and empath myself, I know the challenges of being a highly sensitive person. When overwhelmed with the impact of stressful emotions, empaths can have panic attacks, depression, chronic fatigue, food, sex and drug binges, and many physical symptoms that defy traditional medical diagnosis.

But an empath doesn't have to feel too much and be overloaded once they learn how to center themselves. The first step is to acknowledge that you are an empath. Here are the top 10 traits of an empath from my book on how to achieve emotional freedom. See if you can relate to them. 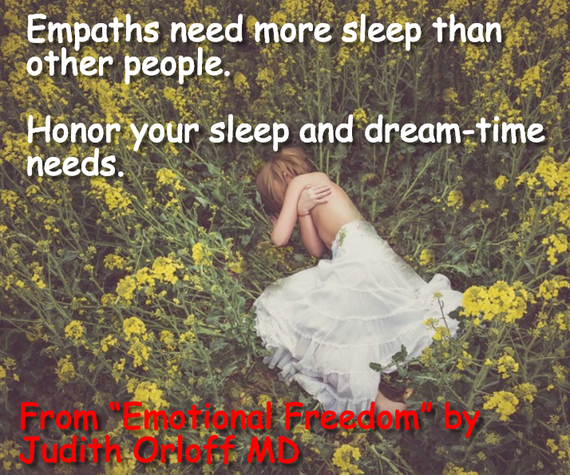 10 Traits of an Empath

1. Empaths are highly sensitive
Empaths are naturally giving, spiritually open, and good listeners. If you want heart, empaths have got it. Through thick and thin, they're there for you, world-class nurturers. But they can easily have their feelings hurt. Empaths are often told that they are "too sensitive" and need to toughen up.

2. Empaths absorb other people's emotions
Empaths are highly attuned to other people's moods, good and bad. They feel everything, sometimes to an extreme. They take on negativity such as anger or anxiety which is exhausting. If they are around peace and love, their bodies take these on and flourish.

3. Many empaths are introverted
Empaths become overwhelmed in crowds, which can amplify their empathy. They tend to be introverted and prefer one to one contact or small groups. Even if an empath is more extroverted they prefer limiting how much time they can be in a crowd or at a party.

4. Empaths are highly intuitive
Empaths experience the world through their intuition. It is important for them to develop their intuition and listen to their gut feelings about people. This will help empaths find positive relationships and avoid energy vampires. Read Introduction to Intuition to learn more.

5. Empaths need alone time
As super-responders, being around people can drain an empath so they periodically need alone time to recharge their batteries. Even a brief escape prevents emotionally overload. Empaths like to take their own cars when they go places so they can leave when they please.

6. Empaths can become overwhelmed in intimate relationships
Too much togetherness can be difficult for an empath so they may avoid intimate relationships. Deep down they are afraid of being engulfed and losing their identity. For empaths to be at ease in a relationship, the traditional paradigm for being a couple must be re-defined. For strategies see my article Relationship Tips for Sensitive People.

7. Empaths are targets for energy vampires
An empath's sensitivity makes them particularly easy marks for energy vampires, whose fear or rage can sap their energy and peace of mind. Vampires do more than drain an empath's physical energy. The especially dangerous ones such as narcissists (they lack empathy and are only concerned with themselves) can make them believe they're unworthy and unlovable. Other vampires include The Victim, The Chronic Talker, The Drama Queen and more. To help you deal with the drainers in your life read 4 Strategies to Survive Emotional Vampires.

8. Empaths become replenished in nature
The busyness of ever day life can be too much for an empath. The natural world nourishes and restores them. It helps them to release their burdens and they take refuge in the presence of green wild things, the ocean or other bodies of water.

9. Empaths have highly tuned senses
An empath's nerves can get frayed by noise, smells, or excessive talking.

10. Empaths have huge hearts but sometimes give too much
Empaths are big-hearted people and try to relieve the pain of others. A homeless person holding a cardboard sign, "I'm hungry" at a busy intersection; a hurt child; a distraught friend. It's natural to want to reach out to them, ease their pain. But empaths don't stop there. Instead, they take it on. Suddenly they're the one feeling drained or upset when they felt fine before.

As an empath myself, I use many strategies to protect my sensitivities such as fierce time management, setting limits and boundaries with draining people, meditation to calm and center myself, and going out into nature. Being an empath is a gift in my life but I had to learn to take care of myself. Empaths have special needs. It's important to honor yours and communicate them to loved ones.

The Power of Surrender: Let Go and Energize Your Relationships, Success, and Well-Being
by Judith Orloff M.D.

Emotional Freedom: Liberate Yourself from Negative Emotions and Transform Your Life
by Judith Orloff