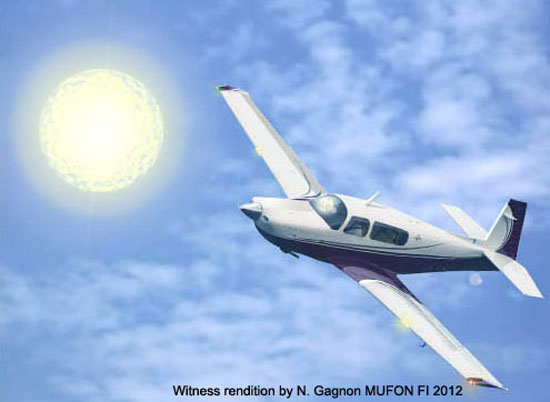 Caption: Case 36293. Graphic depicts the father-son case near Chase City, VA, where the object 'came within 50 feet of their right wing.'

The Science Review Board from the Mutual UFO Network (MUFON) recently released their top 10 cases from 2012. Here's a quick summary of these cases:

A father and son, both pilots, were flying in an Ovation II propeller-driven aircraft from Charlotte, NC, to Richmond, VA. They witnessed a bright, orb-like UFO hovering next to their plane. They described the UFO as a bright, circular sphere about 30 feet in diameter. As the object approached their right wing, the plane temporarily lost power. The engine sputtered and all of the electrical equipment including the computers turned off. The pilots estimate that the object came within 50 feet of their right wing. A few seconds later, the plane regained all systems as the UFO swiftly shot away at an incredible speed.

Two officers on duty at a correctional facility saw a triangular object to their south. It was a clear night and the moon was not out. The object flew over them very slowly, appearing to be going only about 5 mph.

A security guard was traveling to a construction site to relieve another officer near a levee off McClatchy Road west of Yuba City when he noticed a glowing white light amongst the trees. As he continued in the direction toward the light he continued to observe it until he came within about 650 yards of the object. During the five minutes that he observed the object he noted its saucer-like shape as it glided a few feet above the tree line.

A mother in rural Wisconsin was standing in her driveway on the north side of her house saying goodnight to her daughter who was in the driver's seat of her minivan with her 4-year-old son in the rear seat. Looking south from the minivan, the daughter could see the front of the house and the sky above, while the mother was facing north with her back to the house. The daughter saw something above the garage roof, stretching from the chimney on the house to a tree about 75 feet away.

The two witnesses saw a pentagon-shaped, black object hovering over the highway ahead of them. At each apex of the pentagon were lights and a more intense light in the middle of the object. The lights at the corners were white and pulsated about once per second. As the witnesses drove under the object they could hear no sound coming from the craft above them.

All three witnesses described a silent, triangular object that displayed white lights on the apex of the triangle and a ruby-colored light in the center of the triangle. There was not sufficient information in the movement of the object to establish that it was not potentially a drone or experimental aircraft.

The witness and four other family members observed nine bright objects pulsating or throbbing deep orange to light orange, each about the size of the full moon, moving ENE to SSW at near treetop level, hovering just above the trees in her backyard at a height of 500 feet to one mile, and then shooting upward into the sky one after another at a 45-degree angle and at an extreme rate of speed. It took each object only 1-2 seconds to disappear from view as it accelerated.

This report comes from a 50-year-old male.

I saw movement coming from the Ursa Minor Constellation. It seemed as though one of the stars was moving in a northerly direction. As I watched it for a few seconds it seemed as though the 'air' around the 'star' seemed to ripple sort of the same way heat does when watching it rise from the ground at a distance. It was then that I noticed it 'moving' again and thought it odd as the stars that make up the Constellation of Ursa Minor don't MOVE! So I shined the flood light at the 'star' that was moving. It seemed to 'absorb' the light. It reminded me of the way water moves when a pebble is dropped and ripples. As I shined the light on it, it actually seemed to respond. It shined a light back at me!

Two women and their two children saw a silent, black object that hovered almost directly over their home at a height of several hundred feet. The duration of the incident was about 30 minutes. Three short videos of the object were provided by the witness.

The witness and a companion observed a saucer-like craft approach his truck at treetop height from the right (north) shoulder of the interstate. The object slowly approached the witness' vehicle and hovered for a few seconds and then disappeared. The object was about 30 feet in diameter, had eight white lights around the underside perimeter and one white light, equal in size of those on the perimeter, in the center.

More information about these 10 accounts can be reviewed here.