Yesterday, STEMconnector released a list of the top 100 CEO leaders in science, technology, engineering, and math (STEM). But something stood out about their photo compilation of these powerful STEM head honchos. 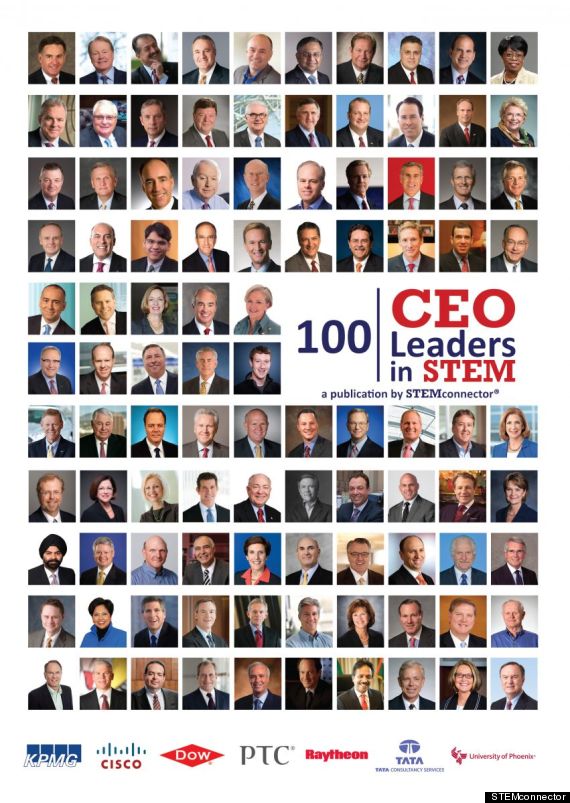 Oh, they're all dudes.

Oh, and they're all white dudes.

Out of 100 profiled STEM executives, only 18 are women. And even less appear to be anything other than Caucasian.

We can't blame STEMconnector -- They did their part in highlighting the top female leaders in STEM in 2012. But the 'Top 100' collage is a glaring and almost-funny-if-it-wasn't-actually-terrible indicator of the state of STEM today: It's mostly a bunch of old white guys.

Although women make up 50 percent of the American workforce, they hold less than 24 percent of U.S. STEM jobs. Blacks and Hispanics make up even less of this group, at 7 percent and 6 percent respectively.

But science is a field that thrives on debate and discourse: Greater diversity breeds better ideas, and in turn, a more competitive and healthier economy. We need people from all different backgrounds in these fields, now more than ever.

So fellow geeks, come one, come all. Climb the escalator, do work, and make that 'Top 100 STEM Leaders' photo collage a little easier on the eyes. Because I'm getting tired of looking at lists of 'Top 100' white dudes.

Editor's Note: This post is part of HuffPost's Girls In STEM Mentorship Program. Join the conversation here or on Twitter (#hpSTEM) as we discuss issues affecting women in science, technology, engineering and math.