Tis the season for viral commencement speeches, when celebrities from the D-list all the way up to, oh, Bill Clinton, tell college grads how to reach for the stars and find their way in this world and use sunscreen. Our favorite speech of all time remains David Foster Wallace's "This Is Water," which he delivered at Kenyon College in 2005. (Watch it here, or get it as a miniature coffee table book here.)

Believe it or not, most commencement speakers won't tell you how to make long-term monogamy work, or what the etiquette is for post-college booty calling. So while we are decidedly below D-list status, we would like to share our advice for heading out into the big, bad, real world.

1. Dating gets better. We know you've been told that college years are the best years of your life, and this may be true when it comes to, say, drinking until you fall over and facing zero repercussions when you sleep until four the next afternoon. But it's not true when it comes to dating. Your best dating years are ahead of you. Sure, you will experience some horrendous first dates -- probably many. And we're fairly sure you will also suffer at least one heart-rending breakup -- an experience so bad that you will want to curl up in a ball in your bathtub and never come out. But, in general, people in their 20s and 30s are much better at dating than college kids. For one thing: They actually date.

2. Monogamy doesn't come naturally. It takes work. If you decide that monogamy is for you -- and we highly recommend it -- then you're going to have to work to buttress it. In other words, don't put yourself in temptation's way -- no boozy late-night drinks with former booty calls.

3. Monogamy isn't for everyone. And that's okay. What's not okay is pretending you're good with monogamy, and then lying and cheating your way through a supposedly monogamous relationship. If you're not ready to be with just one person -- and maybe you'll never be ready for this -- then explore the possibilities of non-monogamy. Like monogamy, it has many pros, and like monogamy, it takes work.

4. Condoms are more important than sunscreen. Okay, so sunscreen is important, too, especially when sunbathing naked (ouch), but condoms matter, too.  Also, get tested for STDs frequently, and be honest about your sexual history. And get that HPV vaccine! It's not too late.

5. We don't care what the Princeton Mom says: Rape is not a "learning experience." In case you didn't learn this in college (and current statistics suggest you probably haven't): Even if you know the person, even if you're drunk, even if you're on a date with them -- if you don't want to have sex and the person continues, then it's rape. With or without duct tape. And if anyone (ahem, Princeton Mom) attempts to call it "a clumsy hookup melodrama" or a "fumbled attempt at a kiss or a caress," then you just tell them to go back to the seventies where they belong. This is 2015, and rape is rape.

6. Being good at sex is like studying for a test: Sure, there are some general test-taking skills that are useful to know, but to really ace a test, you need knowledge specific to that test. Put it this way: Just as someone who says they're "a really good test taker" won't necessarily ace the MCATs if they didn't take any pre-med classes, so someone who thinks they're "good in bed" won't necessarily be able to please their partner if they don't know that partner's quirks and wants. So ask questions, and listen to the answers. Pay attention to body language and moans and groans, too. Consider each new sexual experience a blank slate (but not in that Taylor Swift way).

7. You don't have to like casual sex. Sure, you might feel way too young to settle down, but that doesn't mean that you have to embrace one-night stands and drunken booty calls if that's not your thing. Serial monogamy has its perks, too -- and if you believe point #6, above, then this may just lead to better sex.

8. But if you enjoy casual sex, don't let anyone shame you for this. Especially if you're a woman. As long as everyone in bed is being safe and honest and having fun, it's all good.

9. Think twice before texting a nude photo of yourself. Consider cropping your face if you just can't resist. Here's a rule of thumb: if you're not ready to introduce the recipient to your parents, then it's probably a bad idea to trust them with your dirty pics.

10. That said, no matter what you think of the body you have now, one day you will look back on it in awe, so consider preserving it for posterity. Ask your partner -- or even a good friend! -- to shoot you nude. Better yet, get a professional to do the job. You'll thank us later.

12. If you like someone, just ask them out already. That goes double for you ladies.  If they think you're desperate or needy for asking, then screw them and the insecure horse they hobbled in on.

13. There's no such thing as normal in bed, whether you're graduating a virgin or you like to role-play in a sweater vest in bed. There's only what you like... and what you don't.

15. In the best relationships, sex keeps getting better. But this is not an excuse to settle for someone you don't have chemistry with -- sex can't get that much better.

16. Lube is not a crutch. We're not joking. You may be young and nubile, but that's no guarantee that the rivers will be flowing down there. There's no shame in reaching for that pump dispenser -- in fact, it makes sex better for everyone.

18. About once a millennium, a booty call matures into a real relationship. You are not the exception to this rule.

19. It's okay to like Taylor Swift. Ditto One Direction, or rom coms, or putting ketchup on your steak. The easiest way to find people -- both friends and lovers -- who like you for who you really are is to be yourself.

20. Write your own damn commencement speech. We're serious: actually write something down. Or, whatever, type it if you can't remember how to hold a pen. Pick ten or twenty things that you want to remember, or things you want to do, or things you swear you'll never do. Repeat every June, and pay attention to the things that appear year after year. This is more important than anything a commencement speaker has to say. Except condoms -- and sunscreen on your naughty bits. 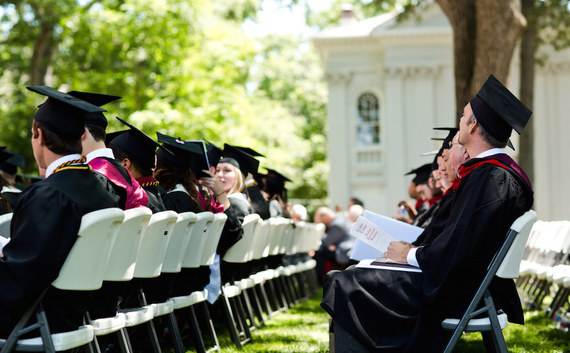