Taxpayers United of America recently released a new analysis of the State Universities Retirement System -- the second-largest of the five Illinois pension funds.

The Chicago-based organization, which advocates for tax relief and pension reform, routinely publishes lists highlighting the state's biggest pensioners. Its latest analysis focuses on the retirement system for academics and staff at public universities and community colleges in Illinois.

"SURS is in dire need of significant pension reform, much like the other Illinois state pension funds. But since individual SURS retirees are some of the highest paid employees, and therefore biggest pensioners in Illinois, the need for reform is all the more serious for both beneficiaries and taxpayers," said Jared Labell, the organization's director of operations.

As of June 30, 2015, SURS had a funded ratio of 44.2 percent with $22.1 billion in unfunded pension liabilities, according to a report published in March by the General Assembly's Commission on Government Forecasting and Accountability.

SURS at a glance 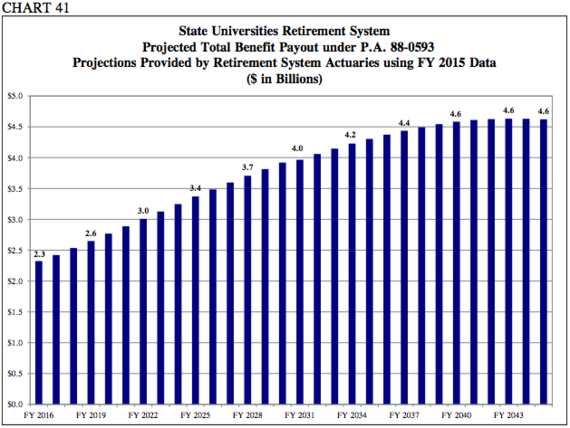 The average annual pension payout in SURS is the second-lowest behind the State Employees' Retirement System, but the vast majority the fund's top pensioners are distinguished medical professionals and former higher education executives.

However, as the Better Government Association reported in 2013, many of the biggest pensioners were University of Illinois at Chicago employees who retired, began collecting their pensions, and then were rehired after waiting the required 60 days in order to work part-time for a smaller salary.

Here are the Top 25 retirees in SURS with the largest annual pensions, according to the analysis.