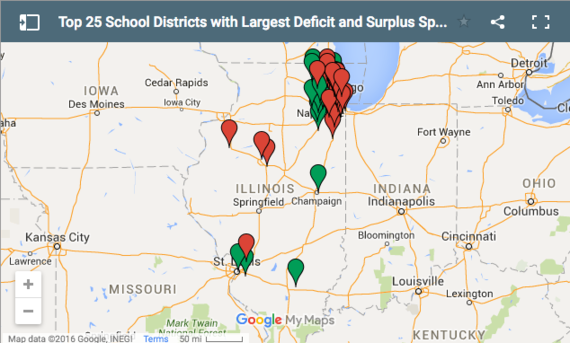 Nearly 60 percent of Illinois school districts are expected to be deficit spending during fiscal year 2016, according to new data from the Illinois State Board of Education.

In FY15, school districts issued $307.2 million in new debt in their operating funds, a decrease of $49.3 million from $356.5 million in FY14. While that's almost a 14 percent drop over the year, the board of education says the majority of districts rely on borrowing to generate cash flow.

Based on revenue and expenditure projections submitted by school districts for their FY16 budgets, the number of districts operating with deficits will increase slightly to 499 (58.6 percent) from 490 (57.2 percent) in FY15, according to the board's recently released School District Financial Profile Scores report. Deficit spending is calculated by analyzing a district's four main operational funds: educational, operation and maintenance, student transportation and working cash.

Here are the Top 25 largest surplus- and deficit-spending school districts in FY16, according to the most recent data from the board of education.

The number of schools and students enrolled in each district as well as the operating expense per pupil (OEPP) are from Illinois Report Card. Cash reserves figures are from districts' 2015 annual financial reports and show the total amount in unreserved funds as of June 30, 2015.

NEXT ARTICLE: These 32 Illinois school districts have the worst financial health in 2016