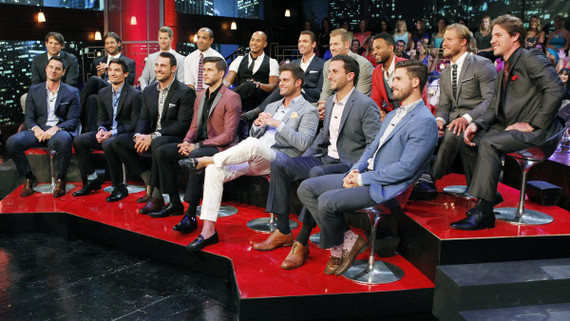 1. Male Feminists Are Sexy
Within minutes of the show's opening, host Chris Harrison said "sexist double standard" and we swooned. Later on in the episode, he even referred to "gender roles" when discussing, euphemistically of course, the fact that Kaitlyn slept with Nick before the Fantasy Suites. Every season has its theme, and we kind of love that this season's was a conversation about how men and women are judged differently. As Chris said to Kaitlyn at the show's close: "You've owned everything you've done, and you've proved yourself to be a strong powerful woman." Aw yeah, Chris, talk feminist to us! The Men Telling All plus the audience members were obviously swooning, too, because at this point they all gave Kaitlyn a standing ovation.

2. Real Men Apologize
But not necessarily on one or two knees -- that just looks weird, Ian, like a cross between a proposal and something gory out of "Game of Thrones." Chris Harrison looked seriously freaked out as he said, "Er, what are you doing?" And the audience members all looked like they had second-hand embarrassment. Also, getting down on your knees to apologize then getting up because you have a cramp is extra mortifying. Oh, and one more tip: If you end your apology to your family/fellow Bachelors/Kaitlyn by adding, "I'm sorry to America," too, it kind of makes the whole thing seem less personal. Still, it was nice to see Ian apologize for being an intellectual snob-slash-douchebag, even if it took some cyberbullying to get him there.

3. Real Men Cry, Too
Man, Chris Harrison dug deep into his inner feminist for this episode! When Ben Z. reminisced about how it's hard for him to open up "when I have emotions and stuff like that," and reminded us that he hasn't cried in eleven years, Chris responded, "A good cry is healthy. Inside, I'm crying right now!" Not that you need to go full-weep, like Cupcake did on a cliff in Ireland, but a few man tears here and there prove you're evolved.

4. Say What You Wanna Say, And Don't Use Airquotes
Chris teased JJ mercilessly for his incessant use of air quotes when trying to defend his bromance with Chris. As did the all-female audience, who tittered at every accidental innuendo that came out of JJ's mouth ("We talked for four hours in the hot tub because we're intellectually curious about each other. We went beneath the surface -- there was a lot of meat there for me.") Hedging is not attractive, and neither are air quotes. Instead, say what you mean and mean what you say.

5. If You Sleep Around "Like a Guy," America Will Call You a Whore
But not Chris Harrison! He read out a bunch of Tweets directed at Kaitlyn, all of them calling her some variation on "whore" or "dirty whore," and many of them referring to her "spread legs," or the STDs she probably has. One female Tweeter in particular talked about what a terrible role model Kaitlyn makes for her kids. (Er, you're watching "The Bachelorette" for role models? That's your problem right there!) But Chris proved that there are men out there who don't buy into the whole double standard crap: "I would take you as a role model for my kids over anybody who would be a cyber bully and spew that kind of hate. I'm proud to call you my friend."