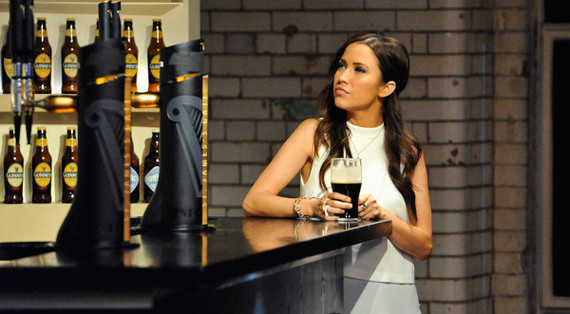 In the world of "The Bachelorette," euphemisms for sex are a dime a dozen -- contestants talk about "really being together" and "being alone" and being able to "focus on each other," when what they really mean is, having sex like bunnies once the cameras are turned off. In that spirit, we will refer to this episode as the "togetherness episode." Because Bachelorette Kaitlyn is apparently so fond of "connecting" with her bachelors -- because, in fact, she already "connected" with one of them (Nick), before the Fantasy Suites, the producers decided to switch up the order this season and put the Fantasy Suites before the hometown visits.

Here are the top five love lessons from "The Bachelorette" this week -- still, inexplicably, based in Ireland.
1. Life Isn't a Fairytale, and Neither Is the Bachelorette
Kaitlyn says that her date with Ben feels like a fairytale -- they're riding horses, they're staying in a castle, she's with "a beautiful man." She even climbs the tower of the castle and she and Ben make dorky Rapunzel jokes to drive the point home. But as Kaitlyn realizes, fairytales can be kind of boring, and a handsome prince on a horse is no match for a "deep thinker" like Nick.

2. If You're Not Sure Whether Someone Is "The One," Having Sex with Them Won't Change That
Caitlin makes numerous comments throughout the show referring to the magic of the Fantasy Suites. "I feel hopeful that I'll wake up in the morning thinking he's the one," she says about Ben. And then, about Shawn, she says: "When I wake up in the morning, I'm going to know a lot more about whether he could be my husband." What, does she have some kind of checklist or something? And what could possibly be on that checklist? Penis size? Spelling test? Openness to certain positions in bed? Sex is obviously a very important part of a relationship, but if you're not sure about someone before you go to bed, chances are, you're going to have no more clarity in the morning.

3. Cable-knit Sweaters Are a Really Hard Look to Pull Off
We know it's cold there. It's hard to miss the lack of bikinis and topless guys! But a cableknit sweater, really? It makes you look like a teddy bear, Ben. Even the pan flute Titanic-style music piped in can't help. Also, if you're dressed like a teddy bear, don't then refer to the night in the Fantasy Suite as "best sleepover over" as if you're ten and expecting to stay up all night reading comics.

4. Golf is a Lot Like Love; It's Something You Can Do Until You're Old and Grey
We know, we know: Where do we come up with these pearls of wisdom? Well, we can't take credit for this lesson ourselves, it's a direct quote from Shawn, apparently attempting to be a deep thinker just like Nick. After saying this, he proceeds to play some terrible golf, and then gets butt naked for his final putt after losing a bet with Kaitlyn. Which we suppose is something you could do when you're old and grey, though they'd probably institutionalize you for it.

5. A Healthy Amount of Jealousy Is a Good Thing, But Too Much Can Sabotage a Relationship
This gem comes straight from Kaitlyn, but we're totally with her. A little jealousy shows that you care, but too much makes you seem controlling, angry, and old school. Exhibit A: Shawn's beet-red face when she attempts to discuss Nick during their Fantasy Suite date. (Apparently Nick claimed that Shawn bragged about being "Eskimo Brothers" with some dude and a country music star, which is possibly the most surreal thing that anyone's ever said on this show, and that's saying something.) That all said, you should also look at the context the jealousy exists in. It's one thing to get annoyed at someone for feeling jealous of a high school boyfriend. It's another thing when he's jealous of the guy you slept with the night before...a guy he's being forced to live with...a guy whose mother you will be meeting in a few days.