It’s been 15 years since Seinfeld ended, but when it comes to comedy, Jerry Seinfeld is still the master of his domain. Despite a generally low profile and a $53 million drop in annual earnings compared to 2009, he’s still raking in enough cash to land the No. 1 spot for the third year in a row on our list of the highest-earning comedians.

Thanks to the show’s lucrative licensing deals, repeats of the 180-episode sitcom have generated over $3 billion in syndication royalties. But stand-up is where Seinfeld really cashes in — he grossed an estimated $27 million from more than 70 tour dates over the past 12 months, giving him a total of $32 million in annual earnings.

In order for comics to make the cut for our list, their primary source of income had to come from concert ticket sales. To compile our earnings numbers, which consist of pretax gross income, we talked to agents, lawyers and other industry insiders to come up with an estimate for what each comedian earned between June 1, 2012 and June 1, 2013. This year’s male-dominated top 10 collectively earned a beefy $201 million over the past 12 months.

Besides Seinfeld, other mainstays on the list who are back this year include Jeff Dunham (No. 4) and Larry the Cable Guy (No. 7), who we estimate banked $19 million and $13 million, respectively. Their earnings have fallen over the years, but the majority on our list are up.

It may be the digital age, but even with content so accessible — for cheap — online, stand-up has been an unusually healthy and stable business. Since the comedy boom in the ’80s, business has become more sophisticated and competitive, but fans continue to gravitate toward live shows, weak economy or not.

Of the hot new talents surging onto our list, Kevin Hart (No. 6) is undoubtedly the most impressive. The Philadelphia native has a social media followings that boasts 7.7 million Twitter followers, 7.4 million Facebook FB -0.21% fans and 390,000 YouTube subscribers. This year, Hart earned an estimated $14 million with the help of his sold-out international comedy tour. It was the world’s third most popular comedy tour of 2012, according to Pollstar, the concert data publication. Jeff Dunham was No. 1.

Hart has a reality-spoof show, The Real Husbands of Hollywood, which he produces and stars in. The series premiere on BET drew more than six million viewers. His new movie, Let Me Explain, surprised with a $10 million gross its opening weekend, making it already the fourth highest-grossing stand-up film of all time. Add that to his roles in films slated for release next year, and it might not be long before Hart inches closer to the No. 1 spot.

Bruce Hills, Chief Operating Officer of Just For Laughs, the world’s largest international comedy festival, says artists are becoming more independent than ever. “In the next decade, comedians will continue to build their business and have the potential to control their own futures without traditional intermediaries,” he said.

The poster boy for this is Louis C.K., who was granted the creative freedom by FX Networks to write, direct and self-produce the Emmy-winning show Louie — on a limited budget. Season four is set to premiere in 2014.

C.K. debuts on the list this year in fifth place with an estimated $16 million in earnings. He’s arguably this year’s most talked-about comedian due to his circumvention of giant ticket distributors.

For his most recent tour, the comedian sold each ticket for $45 directly to fans through his website, instead of going through Ticketmaster, which typically tacks on an extra 20% to 40% for service fees.

Though he admits that by cutting out the middlemen, he earns less and works more, his fans are able to pay less to see him perform. This type of brand control is likely to increase C.K.’s star power, and he’s well aware of it. Some 45 hours after his tickets went on sale, C.K. announced via his Twitter account that he had already sold 100,000 tickets, and grossed $4.5 million.

“For as long as I’ve known him, he always believed in the right for comedians to practice their art however they felt fit,” says Noam Dworman, who owns New York’s Comedy Cellar on Macdougal St., the club featured in the opening scene of Louie, and one that the comedian frequently performed at early in his career. “That guy has all the temerity of a guy who knows he warrants confidence and power. I have the utmost admiration for him.”

In third place is one of the world’s most successful touring comedians, Russell Peters, who has managed to earn a rich income on the road without the supplements of Hollywood, media buzz, or a television series.

“Internationally, live comedy has also been very quantifiable. American comedians, who may or may not be big names, can have a career extending beyond North America,” says Geof Wills, president of Live Nation Comedy. “But it’s been tougher for foreign comics to come to the U.S. and sell tickets.”

Not for Peters, though. His ethnic comedy, typically inspired by South Asian cultural stereotypes, has earned him a massive international following. The Canadian comic took in an estimated $21 million this past year, and has sold-out large arenas like Madison Square Garden and London’s O2 Arena. Tickets to his show last year in Dubai reportedly sold out quicker than Madonna’s.

While the comics on our list are flying high, life can be hard for many in the lower rungs of the business. Most aspiring comics start out in the local club scene, where gigs can pay as little as $20 for a weekday spot and $75 on a weekend.

“Comedians don’t get paid much their first seven or eight years,” says Benjy Susswein, a comedy booker at Stand Up NY. “Many comedians who perform at our club who have late-night credits also need day jobs to pay the rent. It’s a brutal job with different hours: nights, weekends; it’s a lot of driving out, bombing, having your heart ripped out, and learning from that.”

But, as with everything else in entertainment: no pain, no gain. Some fresh faces emerging from that process who might make our list in the coming years: Amy Schumer, Bill Burr and Aziz Ansari. 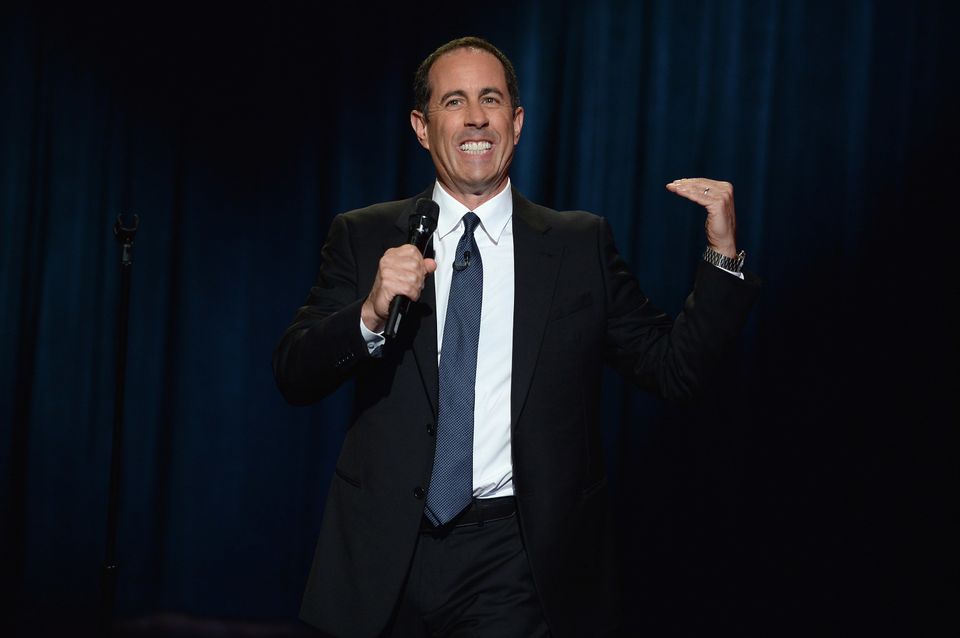 1 / 5
1. Jerry Seinfeld
<strong>Annual Earnings: $32 million</strong> Seinfeld’s invincible star power earns him top touring-dollars for the large crowds he pulls, and the veteran’s take-home cut of each show is higher than any other comedian on our list. Still, what helps keeps the king of comedy on top of FORBES’ rankings are the several million syndication dollars he earns each year from Seinfeld reruns. Not bad for a show about nothing. His latest project: “Comedians in Cars Getting Coffee,” Seinfeld’s Internet series of web interviews with comedians, in cars, getting coffee.
Getty Images