2013 was quieter than usual on the blog, but not when it came to stories about race and relationships in the 21st century. Here are the interracial moments that caught my eye (and side-eye) the year:

The Declaration of Kanye West

And a lot of what the Kardashians do that I don't think they get enough credit, is they prep America to understand interracial relationships because I'm not talking about me... whatever they say in the barbershop don't matter 'cause I don't get my hair cut there! But, for the people that do get there hair cut there, and if there is like a white woman that's getting talked down to by her friends because, you know, she's dating a Black guy, now you got a point of reference... because don't act like interracial relationships ain't been a problem...

Clearly, I need to spend more time in barbershops in 2014 because that seems to be where all the deep conversations about interracial relationships are happening.  (See also, Cornball Brothas: Two Robs Don't Make a Right and What Would You Do: Black Guy Brings White Girlfriend to Harlem Barbershop.)

"Bro, I knew something was wrong when a little pretty white girl ran into a Black man's arms. Something is WRONG HERE... either she homeless or she got problems. That's the only reason she runnin' to a Black man!"

"Or maybe, Mr. Ramsey, a little pretty white girl or woman runs into a Black man's arms because that Black man is her friend, relative or heck, her spouse?" One can only hope that Mr. Ramsey will share his further musings on race in his forthcoming memoir.

Rarely do I see a commercial featuring a family where the parents and children actually look they could be related biologically in real life. General Mills took the radical step of depicting a 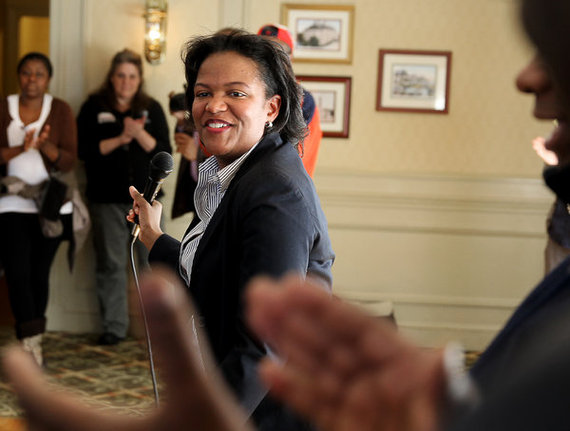 State Senator Dorcena-Forry on carrying on the half-century-long tradition of the state senator from the First Suffolk District hosting the South Boston St. Patrick's Day Breakfast even though she isn't an Irish-American man from Southie:

I have four bi-racial children -- Irish-American and Black. I've been to Ireland four times. We celebrate the culture in my house. My two oldest sons were baptized in St. Augustine's chapel in South Boston. I'm not just a random Black woman who has this seat.

To paraphrase: "Don't get it twisted. I am not the one."

One Drop of Love's Cambridge Premiere

A true gem. Hope lots more people get to hear this story in 2014.