God definitely moved in strange and unusual ways this past year -- at least judging from when and where the Creator of the universe has been seen.

For instance, a couple in Anderson County, S.C., believe they saw the image of Jesus appear in their Walmart receipt, while a woman in Kansas has varicose veins that reportedly spell out the letters "G-O-D."

People also claimed they saw Christ in pizza, rocking chairs and on the side of an Irish cliff.

Of course, seeing a Christ-like image in odd places -- like a glob of melted wax -- could be a profound experience to some, and a mere coincidence or simple joke to others.

Nevertheless, there may be a scientific explanation for those who find significance in such sacred sightings.

Researchers at Northwestern University led by Joel Voss say the human brain is wired to look for familiarity and meaning in the most abstract squiggles.

Because our brains automatically identify similar objects and then organize them according to type, we can look at a baseball cap and a fedora and know right away that both are hats.

However, all the scientific evidence in the world doesn't take away the profound spiritual feelings felt by people like pilot Sandra Clifford, the woman who saw the image of Jesus on the side of the cliff in Ireland and snapped a photo on her digital camera.

"I definitely felt a divine presence," Clifford told HuffPost Weird News. "To me, it was definitely a face, but I realize some people may interpret it differently."

Of course, other people don't leave sacred sightings to chance, like Brooklyn entrepreneur Rob Corso, who is marketing a panini maker called the Grilled Cheesus, which prints the image of Jesus onto sandwiches. It goes on the market in March, and he hopes to make a lot of (daily) bread from it. 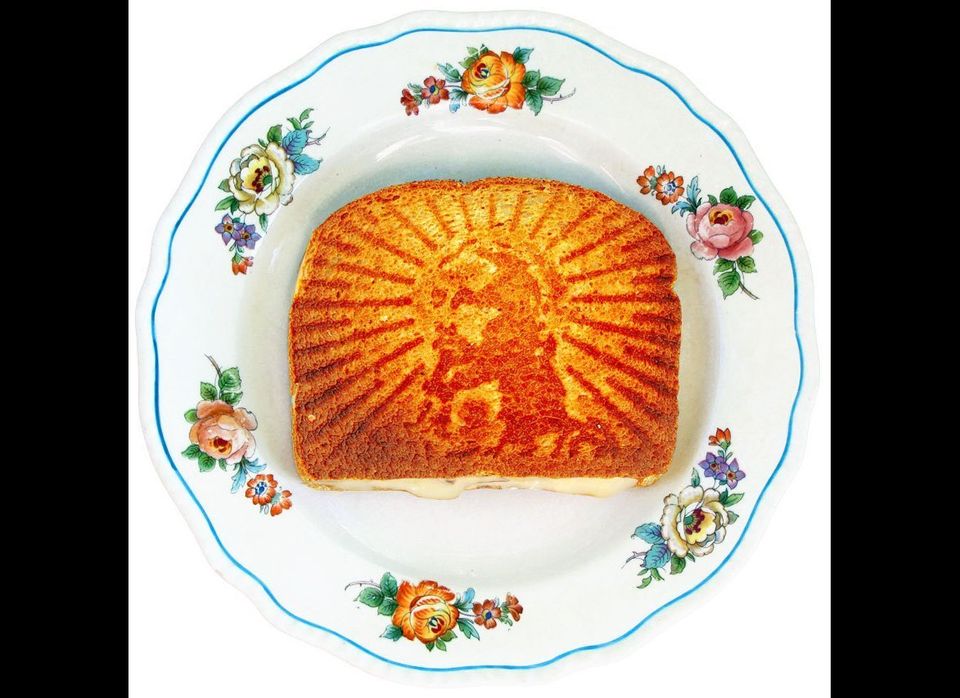 1 / 11
No. 11: Grilled Cheesus Panini Maker
Brooklynite Robert Corso is hoping to earn the praises of foodies by creating a panini maker called the Grilled Cheesus. The device isn't on the market yet, but a $25,000 funding drive was the answer to his prayers, and the first set of appliances is currently being manufactured.
Courtesy of GrilledCheesus.com