The race for Iowa's open U.S. Senate seat is among the closest in the nation, and one of a handful that could determine control of the Senate this fall. In her final debate with four-term Democratic U.S. Rep. Bruce Braley, Republican state Sen. Joni Ernst recently said she doesn't see a need to reform current campaign finance laws, because she believes in "political free speech." 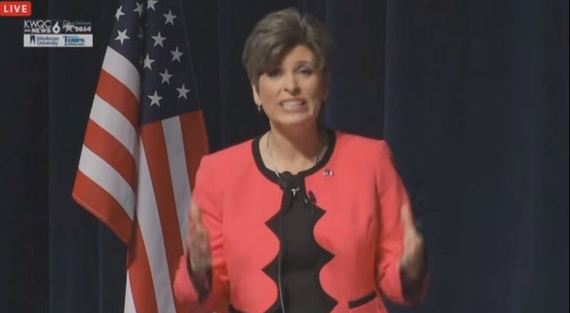 Since the Supreme Court's disastrous Citizens United decision in 2010, big money has flooded into politics at levels never seen before, giving the ultra-wealthy the green light to use their megabucks to fund the kind of "political free speech" that's capable of drowning out everyone else's.

And that's the game being played by one of Joni Ernst's biggest donors, New York hedge fund co-CEO and near-billionaire Robert Mercer. Described by Bloomberg News as "one of the most powerful men in Republican politics that nobody is talking about," and ranked #6 on ABC News' recent list of 2014's "Mega-Donors," Mercer is fast becoming a GOP kingmaker. 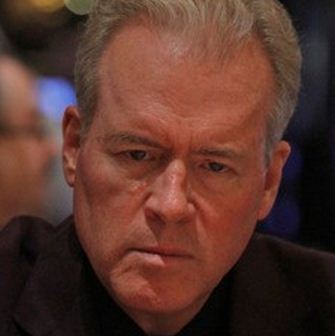 By contributing $5,200 to Ernst this cycle, Mercer maxed out his legally permissible individual contributions to Ernst's Senate campaign. Yet, as revealed in a report released this week by the Brennan Center for Justice, Mercer's extensive support for Joni Ernst won him the dubious distinction of being 2014's "biggest-spending double-dipper." Double-dipping means donating the legal maximum allowed to a candidate, then supporting them with even more money by dumping cash into a super PAC set up solely to benefit that same candidate. Such super PACs can accept unlimited donations.

According to the report, Mercer spent $350,000 this year to "virtually fully fund" a super PAC called American Heartland, which is supporting Ernst. Despite its name, American Heartland is run out of Washington, D.C.

In this year's Iowa Republican primary, Mercer was outed as the money man behind American Heartland when the super PAC spent $140,000 opposing former energy company CEO Marc Jacobs, Ernst's closest rival for the GOP nomination. Jacobs' campaign manager said "Ernst has relied on out-of-state special interests" who were behind the attacks, and implored "voters to "ask themselves, before they vote, will Joni Ernst represent them or a New York billionaire...something doesn't smell right." 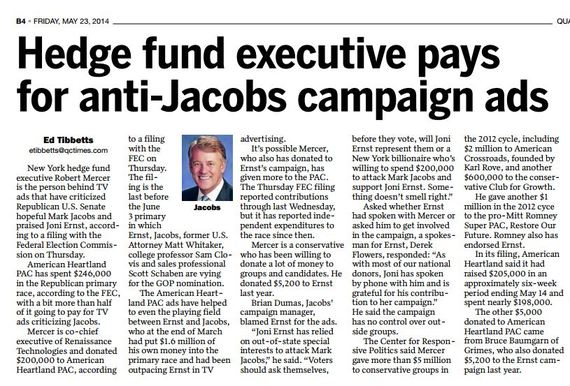 But Mercer's generosity towards Republican political candidates and conservative super PACs he supports allegedly doesn't extend to his domestic help.

Last year, Mercer was sued by members of his household staff for supposedly not paying overtime and docking wages when maids and other employees failed to promptly restock shampoo bottles, change razor blades in shavers, straighten pictures, or committed any of a laundry list of other offenses.

Defendants deducted money from Plaintiffs' semiannual bonuses as a form of punishment or "demerits" related to Plaintiffs' alleged poor work performance. Demerits initially began at $10 and during the course of Plaintiffs' employment, rose to $20 per demerit. Plaintiffs received demerits throughout the work year for alleged poor work performance, including but not limited to the following: failing to replace shampoos and other toiletries if there was an amount of less than one-third of a bottle remaining; failing to properly close doors; failing to leave extra towels in the bathroom; failing to change the razor blades in the shaver; failing to level pictures; leaving cleaning items out; leaving items in the refrigerator; and improperly counting beverages.

The lawyer representing members of Mercer's household staff, Troy Kessler, said, "This is a social justice case. Domestic, low-wage workers are frequently taken advantage of and (in) this case it's particularly egregious."

According to Forbes, Mercer was the 16th highest paid hedge fund manager in the country in 2011, with a total pay package of $125 million. In 2012, he took home $90 million. In addition to his Owl's Nest mansion and Long Island estate, Mercer owns a 186-foot luxury yacht named the Sea Owl.

During that same period, Mercer was the 16th largest donor to super PACs in the 2011-12 election cycle, as estimated by the Center for Responsive Politics. That year, he gave $5.5 million to pro-Republican super PACs, including $2 to Karl Rove's American Crossroads, and $1 million to Restore Our Future, the pro-Mitt Romney PAC. He also donated $600,000 to the Club For Growth's super PAC, whose attack ads were crucial to the rise of national Tea Party mouthpiece Sen. Ted Cruz (R-TX).

This year, Mercer and his wife rank #6 on the list of the country's 100 top political donors, with $3.75 million in reported contributions to federal candidates and PAC's for the 2014 cycle.

Mercer is also 2014's highest single contributor to Freedom Partners Action Fund, the super PAC that the Koch brothers set up over the summer. Mercer wrote a check for $2.5 million to the fund, which was set up to bankroll ads that explicitly attack Democratic candidates and support Republicans.

Ernst probably first met Robert Mercer when she attended the Koch brothers' August, 2013 big donor retreat in New Mexico. At the time, Ernst was a little-known, first-term Iowa state Senator who had just announced her candidacy for the GOP U.S. Senate nomination against three male rivals.

As Politico reported, the Koch-sponsored twice-annual meetings "generally attract top conservative talent, for whom they can be quite useful, providing an opportunity to build rapport with some of the movements' deepest-pocketed backers."

Returning to this summer's retreat in California, Ernst was one of three GOP U.S. Senate candidates to address the donors, along with Tom Cotton of Arkansas and Colorado's Cory Gardner. "It started right here with all of your folks," said Ernst, offering her gratitude for the support of what she termed "this wonderful network" of wealthy, right-wing multi-millionaires and billionaires.

Ernst has lots of extreme views that probably find favor with her right-wing donors. She wants to abolish the EPA, IRS, and the U.S. Department of Education. She opposes abortion with no exceptions for rape or incest, believes "the UN is behind" a thoroughly debunked conspiracy to relocate farmers from rural lands into cities, and opposes a federal minimum wage (because she says "$7.25 is appropriate for Iowa").

But most pleasing to their ears must be the fact that Ernst supports a flat tax on income.

If Joni Ernst goes to Washington, Robert Mercer's support for her candidacy will have earned huge dividends. He'll be one step closer to paying taxes on his enormous fortune at the exact same rate as the domestic workers he's been accused of nickel and diming over shampoo bottles and razor blades. For one of 2014's top "Mega-Donors," that would count as a great return on investment.