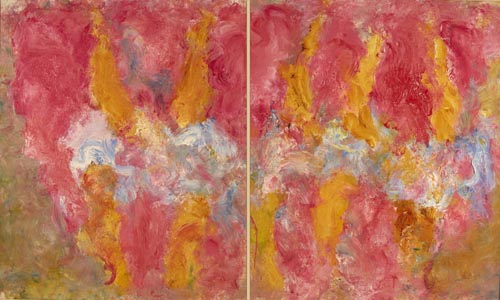 When it comes to art fairs, the Palm Beach Show Group has developed into one of the world's leading organizations, presenting in Los Angeles annual magical environments of fine art from leading galleries in America, in particular, California, and around the world, from Moscow and Seoul to Beijing and Düsseldorf. The LA Art Show, which recently premiered at the downtown Los Angeles Convention Center, continues to be the longest running and largest art fair in the western states. The fair experienced an 80% increase in attendance over last year's, with 6,000 collectors attending opening night and the total attendance figure surpassing 50,000. The show made local history when it was featured as the first ever fair to be on the front page of the Los Angeles Times, and with a big, full-color photograph to boot. Everyone I met seemed to be on their way downtown, including a large contingent from nearby Hollywood, Beverly Hills, Santa Monica and Malibu. The VIP opening night event, needless to say, was full of movie stars, including Guest of Honor James Franco, among others, who added a bit of show biz glamour to the premiere event. And during the final hour of the fair on Sunday afternoon, just after my last panel discussing the economics of art, the convention center was still hosting a capacity crowd--and when an announcement came over the public address system, advising visitors that the fair was being extended another half hour, it resulted in resounding cheers from the hundreds of people still walking the floor in this enormous venue.

The LA Art Show is entirely unique in the art world, juxtaposing contemporary works alongside the historic and traditional, which highlights admirably the evolution of art through the ages. With 110 galleries participating in the fair it's impossible to write about all of them, but I have selected a dozen from several categories and in no particular order, whose common denominator is their superb quality.