Here’s a delicious, amazingly good-smelling mulled cider, or wine, recipe you’ll want to make for every fall party—and it could not be easier. It’s from Liana Krissoff’s new Slow Cook Modern, and can go in one of two directions: You can make it nonalcoholic by using a half-gallon of apple cider, or go the adults-only route and use a bottle of red wine. The other ingredients in this sweet and spiced hot drink are brown sugar, orange and lemon slices, fresh ginger, cinnamon sticks, cloves, allspice berries, cardamom pods and nutmeg—which means that yes, the aroma is out of this world. You can serve the cider, or wine, straight from the slow-cooker, too, on your machine’s low or keep-warm setting.

Get the recipe: Mulled Cider (or Wine)

Another Delicious Use for Pumpkin

Pumpkin isn’t just fantastic with cinnamon, cloves and nutmeg. The buttery, earthy squash also is a natural for more sophisticated spices, such as cumin, coriander and cardamom. Toss cubes of pumpkin into the slow cooker along with onion, garlic, ginger, the spices, some chicken stock and a can of unsweetened coconut milk; and, in two or three hours, you’ll have a thick, creamy soup that combines sweet and spicy flavors.

Get the recipe: Curried Pumpkin Soup

Summer may get all the glory when it comes to colorful produce, but this recipe is a reminder of just how beautiful autumn vegetables can be. It stars bright-orange, sweet-tasting butternut squash and deep-green kale, plus creamy chickpeas and a supporting cast of some of our favorite flavor-boosters, such as garlic and smoky paprika.

Get the recipe: Kale, Chickpea and Butternut Squash Stew

As if we needed another reason to love nachos, here’s an insanely good twist on the classic. You cook chicken thighs, or breasts, in a mixture of Buffalo sauce, sweet chili sauce, honey, soy sauce and chili flakes until it’s shreddable. Then, arrange the cooked meat over a layer of tortilla chips, top it with Monterey Jack and cheddar and bake for five minutes. Serve these sweet and spicy nachos with jalapeños, green onions and cilantro, or with sliced olives, dollops of sour cream and/or diced avocado.

Get the recipe: Firecracker Chicken Nachos

Busy fall weekends don’t have to end with takeout on a Sunday night. This tried-and-true pot roast is perfect for days when you’re running from sporting event to apple picking, since it’s warm and filling yet doesn’t require more than a few minutes of your time. And while the basic recipe calls for carrots, we love swapping in parsnips, which are in season from fall right through spring. Their sweet, nutty taste is a nice complement to the rich beef.

Proof That Pork and Applesauce Are Still a Perfect Match

Pork and apples are a classic pairing; the mild-tasting meat is perfect with the sweet-tart fruit. This smart recipe has you combine a pork loin with sliced apples. As the fruit stews in the slow cooker, it softens into a slumpy, chunky sauce that would be great on its own, but is even better with juicy pork tenderloin.

Get the recipe: Apple and Onion Pork-Loin

The Baked Brie with 3 Can’t-Miss Additions

There are dozens of ways to make festive, fondue-like baked Brie, but here is a version you may not have tried before, which draws on the dried form of a quintessential fall fruit: cranberries. You sprinkle tart, dried cranberries over the cheese, along with balsamic vinegar (which turns into a rich syrup when cooked) and finely chopped, fresh rosemary. The result is a savory and sweet complement to the melted, buttery Brie that’s perfect with crackers, sliced apples or toast points.

Get the recipe: Brie with a Cranberry Balsamic Sauce

A Chicken Stew with an Asian Accent

The flavors in this hearty chicken stew are inspired by a traditional Chinese hot pot and include shiitake mushrooms, minced garlic, five-spice powder and a bit of red-pepper flakes, among other ingredients. But the surprise addition is a quarter-cup of dark maple syrup, which adds a pleasing counterpoint to the spices. And while the syrup is typically made in the spring, its sweet taste and caramel color feel just right on a cool and crisp fall day; plus, using maple syrup in a meaty dish, as Katie Webster shows us how to in her new book, Maple, feels fresh and new.

The Light Spin on a Game-Day Staple

If you’ve got a slow cooker, you’ve probably made chili in it, realizing, as we have, that it seems there’s no limit to how long the meat and spices can spend simmering away, melding together in perfect harmony. It’s a great dish to make for a game-watching crowd, too, since guests can help themselves and top off their chili bowls with their choice of fixings. Instead of beef, though, this recipe has you use boneless, skinless chicken breasts, or thighs, cut into half-inch cubes. The poultry is surprisingly perfect with corn, green chilies, salsa, beans and cilantro; it’s a milder meat than beef and lets the bright taste of all those other ingredients shine.

Get the recipe: Slow-Cooker Cilantro-Cumin-Chicken Chili

A New Method for Making a Traditional Treat

Old-fashioned apple cake is such a nice sweet to have around; make it on a Sunday and you’ll have a not-too-heavy, just-indulgent-enough dessert to eat all week (that is, if it lasts that long). We love this creative recipe from the new cook book, Slow Cooker Desserts, by Roxanne Wyss and Kathy Moore. You actually bake the cake in a springform pan set in the cooker, so you get a perfectly round cake but can actually leave the house while it bakes.

Get the recipe: Cider-Glazed Apple-Walnut Cake

A Spoonable Alternative to Pecan Pie

Although you can get pecans year-round, they’re harvested in the fall and the buttery-tasting nuts often show up in Thanksgiving desserts. Try them in Wyss and Moore’s bread pudding, which combines cubed cinnamon-swirl bread with the crunchy nuts. In just a few hours, the slow cooker turns the egg- and milk-soaked bread into tender pudding that melts in your mouth.

Get the recipe: Praline-Pecan Bread Pudding

The Easiest Way to Make Your Toast Taste Like Fall

Apple butter is basically applesauce that’s gone to the dark side. When you cook the ingredients (apples, cider, spices, lemon juice—plus some brown sugar) in a slow cooker for hours, their flavor concentrates. The sugar caramelizes and turns the apples deep brown. The longer you cook it, the better. Wyss and Moore suggest letting it simmer overnight, since it will thicken while you sleep, and you can wake up to warm, fresh apple butter to spread on toast, muffins or scones.

Get the recipe: Apple Butter

The Chutney That Has No Bounds

Keep a container of flavorful chutney on hand and you’ll never be at a loss for a creative appetizer, lunch or dessert. This one incorporates cranberries, crystallized ginger, dried apricots, cinnamon and orange juice, so it makes a lovely sweet and spicy combination. Spoon it onto a block of cream cheese and either serve the two as a spread for crackers, dollop some on top of a wheel of Brie, add it to a grilled cheese sandwich, spread it on warm scones or let it accompany a slice of pound cake.

Get the recipe: Candied Cranberry and Crystallized Ginger Chutney

PHOTO GALLERY
With These Charts, You Can Cook Anything in a Slow Cooker

Our Top Slow-Cooker Recipes For Fall
With These Charts, You Can Cook Anything in a Slow Cooker 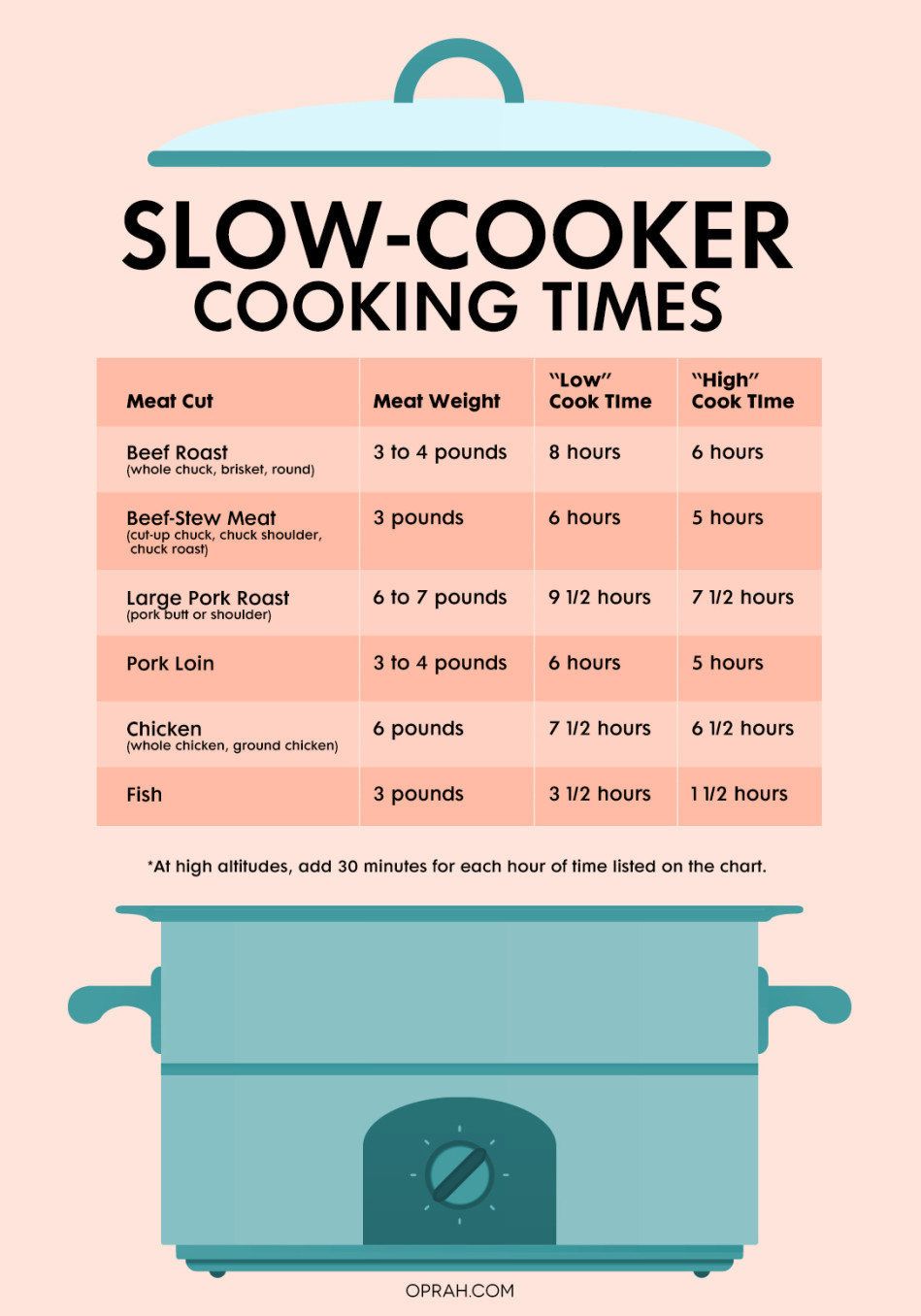 1 / 4
How Long Should I Cook It?
Most slow cookers have just two settings: "Low" and "High" (if only everything in life were so simple). When time allows, we prefer to use "Low," since food tends to cook better on the more gentle heat over a longer period of time. But if you're time-pressed, go ahead and use "High"; slow cookers are pretty forgiving. Just remember that variables such as the meat's fat content and density, the amount of liquid, the size and type of the vegetables and the quantity of food will all affect the cooking time, so these times are approximate. <br><br><a href="http://static.oprah.com/2016/11/slow-cooker-cooking-times-8x11.pdf" target="_blank">Get printable chart here</a>
Credit: Lisa Greene