Will Ryman's "The Roses" (2011) on Park Avenue. Photo by Iwan Baan. Courtesy of Paul Kasmin Gallery

It's certainly not always easy, and often confusing, to sift through the multitude of fresh, genuine talent somewhere out there that is breaking through new ground like spring crotons pushing their colorful heads up along urban sidewalks to add an unexpected and enjoyable experience to our daily lives. This winter, young sculptor, Will Ryman, challenged the harsh colorless Manhattan winter by "planting" 38 larger-than-life painted aluminum roses in the middle of the frozen boulevard on Park Avenue, which was one of the best and most talked about public installations of the winter season and definitely impossible not to notice. His work is a perfect example of how art can stimulate our visual senses while increasing our appreciation of the intellectual forces behind genuine creativity and sheer invention. But most of the great new, underexposed innovative talent is usually not out on the street, but hidden from sight in the back room of a gallery, or gathering some dust in a distant artist's studio that may never literally see the light of day. Unfortunately, it would take years to unearth and evaluate much of the promising works that are somehow finding their way into galleries and faraway art fairs around the world.  This regular column investigates and recommends artists to watch that you may never have heard of before, but you will indeed be hearing a lot more about. 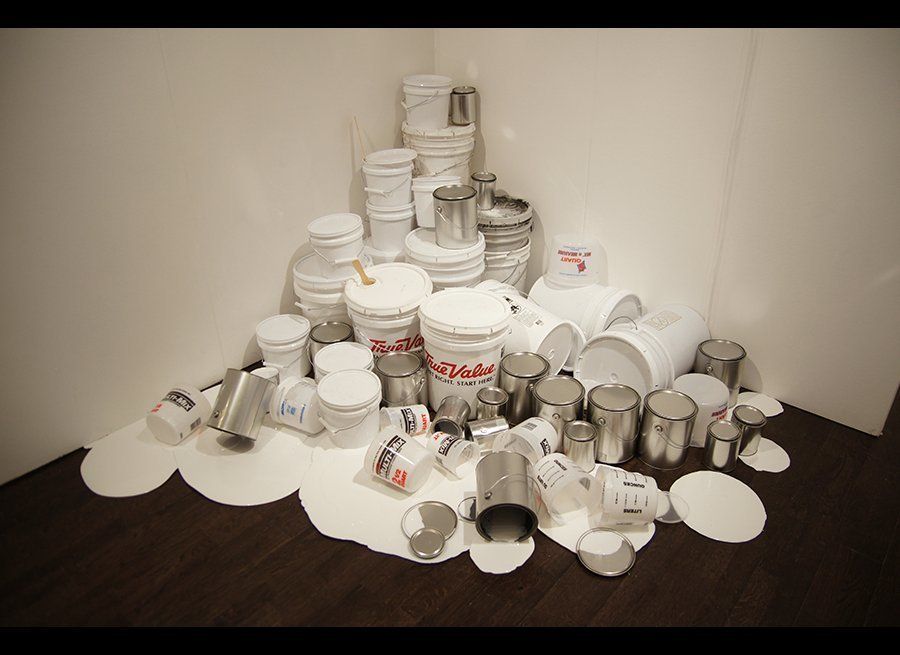 1 / 10
David Ellis, True Value (Paint Fukette), 2011, Kinetic sound installation, Dimensions variable, Courtesy Joshua Liner Gallery, New York.
1. DAVID ELLIS recently stole the show on the top floor of the PULSE fair in New York with his “talking” installation of used paint cans, which seem haphazardly stacked in the corner of a gallery waiting for a janitor to hall them away. Ellis comes from a family of musicians, and he got a start that led to a streetwise hip-hop romance where he began to write rhymes and bang out beats on the desks at school. As he continued to pursue art and music, he began creating sound installations that were quirky and fun and seemed to employ a mysterious backstage magician who pulled invisible strings for unexplainable movements. In the aptly labeled True Value (Paint Fukette), the artist corrals his past experiences from pop musical rhythms and studio experiments, spinning out a drippy acrylic conceptual curveball that is both utilitarian sculpture and jury-rigged subway drum set. Your first encounter with the work feels like a Candid Camera moment that’s hard to believe. Spooky, milky white and filled with obscure connecting metaphors that literally spill out onto the floor, True Value (Paint Fukette) pays an accidental poetic homage to early stain painters and a Pollock or two. Seeing is believing, but you have to hear it at the same time, so for a front row seat to the next performance check out <a href="http://www.thearteconomist.com" target="_hplink">The Art Economist.</a>