My partner Ledcat and I met the Takeis several years ago at a function at ToonSeum celebrating a Batman event. It was a very heady moment when George Takei stopped at the registration table and said "George and Brad Takei are here" then thrust out his wrist for his paper bracelet. One of the perks of volunteering is you occasionally get these moments. They are awesome.

I can admit that I followed George at the party because I was determined to capture him on film with Ledcat and her Batman tote bag. Yes, I made her bring it to the ToonSeum as a photo prop because why not? He was so delightful and witty, smiling the entire night and posing for photo after photo. 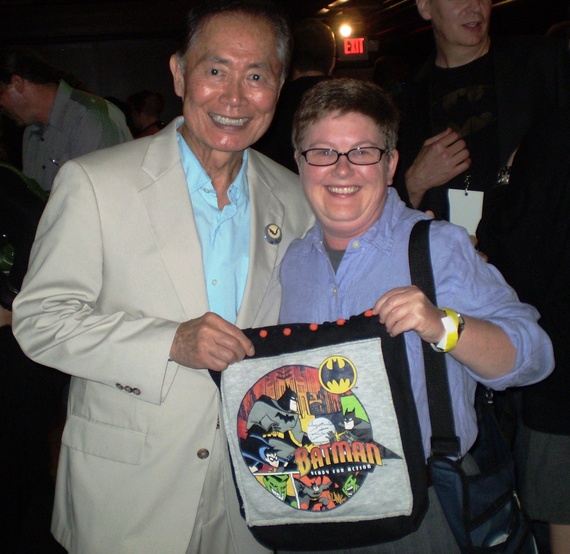 But to me, the best moments of the evening were those when I stood to the side and chatted with his husband Brad Takei (formerly known as Brad Altman, but he changed his name after they married.) Brad was dapper, adorable and incredibly witty himself. He was all smiles and graciousness as his husband disappeared into a swarm of slightly inebriated middle-aged fans eager for a celebrity shot. As I stood talking with Brad about a mutual friend (HuffPo contributor Jen Tyrrell ), I was handed three different cameras by strangers to take photos. I guess I looked like a Star Trek roadie? 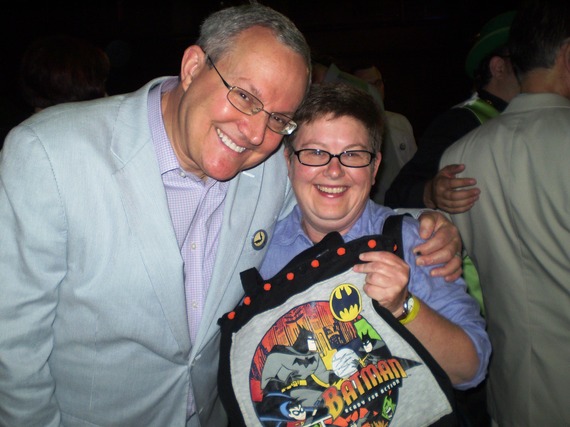 So when Ledcat and I watched To Be Takei documenting George's life, I was not surprised to find myself on #TeamBrad the entire film. The movie is great -- a thoughtful exploration of George's childhood experience as a prisoner in the U.S. internment camps for Japanese-Americans as well as his decision to remain closeted while pursuing an acting career. And then his decision to come out as well as his "second wind" as a social media sensation and Broadway producer.

And throughout it all is Brad, very much a part of George's life for over 25 years. The movie was a testament to their love story as much as George's personal story.

1. George and Brad in the car as captured on a dash cam. Brad is driving, while George is responsible for opening and distributing chips or Cheetos to Brad. Brad snaps his fingers because the Cheetos aren't coming quickly enough. It is the perfect "couple in a car" moment. There's no deference to the Hollywood hero in this relationship. Bring on the Cheetos (or chips.)

2. Brad and George are at a Comic-Con event getting set up for an autograph session. Brad is all-business as he demonstrates the process and carefully accounts for payments (autographs were $45) and a checklist. The crowning moment is when he somewhat gleefully explains that he carries the event contracts on his person to avoid "issues" with the event managers. He's adorable, but ferocious in protecting George.

3. No, the crowning moment is when Brad is stuffing wads of cash into his fanny pack throughout the event. He clearly has some middle-aged lesbian friends who taught him how to use a fanny pack to his advantage. And I bet he has a razor-sharp account of how much is in the bag at all times. But it is clear he is tracking the money, not hoarding it.

4. Brad talking about the painful moment when he was not permitted to accompany George into the Imperial Palace in Tokyo for an honor because they were not a heterosexual married couple. He had to wait on the bus. He did so without hesitation, but it was clear how much that hurt.

5. Brad's disclosure that his mother was a lesbian and his openness about his close relationship with her. His mother's partner was interviewed in the film. During one segment Brad and George distribute her ashes from a mountain vista. They then make jokes about "blowback" from the ashes getting into their eyes and ending up at the dry cleaners. That's love and serenity.

6. Brad's refusal to let the crew film the exterior of their home. Boundaries are set and enforced. Arms are waved. And Brad prevails.

7. Brad lecturing George for being "rude" to Wil Wheaton. George had pointed out that Wil had gained some weight which Brad thought was unnecessary commentary. George seemed to think if its true, its worth saying. Brad sweetly assured Wil that George was being rude and not so sweetly informed George to knock it off.

8. Brad telling George that he would have made an excellent father. He was so adamant and insistent without seeming to regret their decision not to parent. It was a sweet and heartfelt moment.

9. Brad bluntly stating that while George has a loud voice, he can't sing. Then pointing out to the camera that Allegiance is a musical. A moment of silence, a small sigh and an optimistic "We'll see what happens."

10. After Allegiance debuts, George is thrilled with the reception. Brad comments "Well, we'll have to keep working on you memorizing your lines." Cue to fade as they continue to walk away discussing the matter.

Throughout the movie, I kept poking Ledcat and whispering "You are just like Brad!" Her response was that I better get a Hollywood deal and bring in the George Takei money if I wanted to keep her around. I hope she is content with "exposure" from blogging for Huffington Post and similar sites.

But if you have ever worked an event with Ledcat, she puts on those glasses and is all business. She has a certain glare if contracts and expectations are not being met. And she snaps her fingers at me in the car when she wants a cold beverage from my bag. Or really anything.

The difference is that when we go places, everyone wants to talk with Ledcat! Ha. She's like the Brad and the George in our relationship.

We talk about "Hollywood couples" whose relationship endured and I think the Takeis are among those. It is clear that they have been true partners on everything from caretaking for their mothers during their final years to George's career decisions.

The movie isn't just about George. Brad has been part of the story for the past 27 years, sometimes very quietly and sometimes more forcefully. George openly credits Brad as a full partner in their success.

Overall, the movie is sweet, funny, quirky and sobering as it weaves the unlikely tale of a formerly imprisoned Asian-American man growing up to achieve fame in Hollywood and even more fame on Facebook. There are some gaping holes in the story, but this is a documentary with a goal - getting people to see Allegiance and learn more about the experiences of Japanese-Americans. This is not an expose so they tread lightly on his decision to remain in the closet and family relationships, among other things.

I think George is wonderful and I'd love a chance to spend some time with him (minus the comments about my being fat), but I secretly would really like to talk with Brad about his experiences and his life. I hope Pittsburgh's burgeoning film industry brings them back to Pittsburgh soon.

The movie is available on On Demand and in some theaters. I highly recommend it. And be sure to watch for the Brad moments.