This weekend we will celebrate our fathers and the important men in our lives. In their honor I've come up with my list of top ten great reads about great father figures in literature. 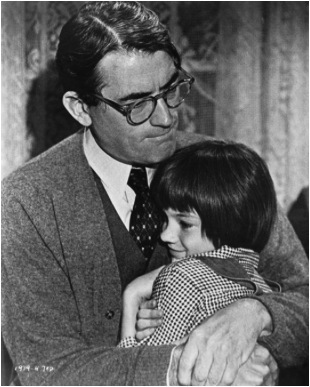 I think I still have to get dad a present, though....

Do you have any favorite fatherly characters from literature? If so, tweet them to me @allisonpataki -- I'd love to hear from you. And, Happy Father's Day!

Pride and Prejudice: The relationship that Jane Austen created between Elizabeth "Lizzy" Bennett and Mr. Bennett seems like the right place to start. Mr. Bennett, father of five girls and husband to an incredibly highstrung and fatalistic wife, finds solace in his close relationship to his second girl and the novel's heroine, Lizzy. It's hard not to be moved when, at the end of the book, Lizzy divulges to her father her love for Mr. Darcy and her intention to marry him. Mr. Bennett, as usual, has just the right thing to say on the matter: "I cannot believe that anyone can deserve you... but it apppears I am overruled. So, I heartily give my consent. I could not have parted with you, my Lizzy, to anyone less worthy."

The Book Thief: The relationship between young Liesel and her adopted father, Hans Hubermann, is in many ways the heartbeat that makes this entire book pulse. While Mama addresses Liesel only as saumensch (roughly translated to the highly flattering moniker of "pig-man"), and is quick to offer a slap across the face, Hans, or Papa, adores Liesel, playing his accordion for her and teaching her to read in a series of secret, late-night sessions. Hans Hubermann's soft and understated brand of strength shines throughout Markus Zusak's novel as a positive force in the otherwise harrowing and tragic setting of Nazi Germany.

The Kite Runner: Khaled Hosseini's novel, set in war-ravaged Afghanistan, is filled with complex and poignant father/son relationships. In "Baba," Hosseini has created a bulwark of integrity and courage, a father figure before whom son Amir can't help but feel that he constantly falls short. But Amir discovers a truth about Baba later in life, a revelation that casts an entirely new light on the unimpeachable character of Baba and calls Amir's memories of his upbringing into question. And then there are the two servants, Ali and his son Hassan, who serve as the heart and soul of the novel. It's the death of Hassan that prompts Amir to return to Taliban-occupied Afghanistan, where he hopes to right the wrongs of his past and save Hassan's orphaned son. These characters will have you crying tears of both joy and heartbreak.

The Diary of Anne Frank: Only Anne's father, Otto Frank, survived the Nazis. And he is the reason that his daughter's diaries were published, revealing to the world the experience of a young Jewish girl in hiding during World War II. Anne loved her father dearly, and wrote often of their close relationship. And yet, even Otto Frank learned something from reading her diary, saying of Anne's writing: "I must say, I was very much surprised by the deep thoughts Anne had. It was quite a different Anne I had known as my daughter...And my conclusion is, since I had been in very good terms with Anne, that most parents don't know really their children."

The Tiger's Wife: All right, so this one's not the father, but the grandfather. Still counts. Téa Obreht writes a relationship between heroine Natalia and her grandfather, the man who inspired her to become a doctor, that involves a shared calling for medicine, survival through civil war, and midnight visits from an elephant (yes, an elephant). Their bond proves so strong that Natalia is willing to set off into the war-ravaged Balkans to find the truth surrounding her grandfather's sudden death. And though he's gone, his presence lingers with Natalia, leading her to a dizzying revelation.

Team of Rivals: In this Doris Kearns Goodwin book, chock-full of historical research and page-turning prose, we see Abraham Lincoln as a savvy politician, a Commander-in-Chief at the helm of a war-torn nation, and, perhaps most touchingly, a husband and father. We melt as we see the lanky, over-burdened leader doting on his small children and allowing them to play under his desk in the Oval Office. And our hearts break with Lincoln when his beloved son Willie dies far too young.

Les Miserables: In Victor Hugo's masterpiece, Jean Val Jean credits his adoption of the abused orphan girl Cosette as the saving grace of his life. Jean Val Jean, an escaped convict, believes that without Cosette he might have slipped back into a life of criminality and baseness. Cosette proves to be the one bright spot in Hugo's otherwise harrowing look at some of French society's most unfortunate members. And Jean Val Jean, as a result, becomes Hugo's most exemplary and moral character: an honest man and a father so devoted to Cosette that he is willing to lay down his life so that she may find happiness with Marius.

Gone With the Wind: While Margaret Mitchell's iconic heroine idealizes and reveres her forbearing, sensitive mother, Scarlett O'Hara realizes that, in temperament and personality, she is her father's daughter. It is from her father, the Irish immigrant Gerald O'Hara, that Scarlett gets her fighting spirit, her quick wit and her even quicker temper. So too does she possess his strength of will and his love for their beloved home, "the red earth of Tara."

A Christmas Carol: You have to hand it to the young legal clerk in Victorian England by the name of Bob Cratchit. In this father figure, Charles Dickens created a character who not only manages to save Christmas for his family (Tiny Tim!), he can even stomach being kind to Ebenezer Scrooge! Cratchit is the long-suffering and optimistic foil to Scrooge's misanthropy and stinginess. Fortunately, Cratchit's style wins out, and the shriveled Scrooge realizes the need for a major personality make-over. In the words of Tiny Tim, who rides atop his father's shoulders in the final scene: "God bless us, everyone!"

To Kill a Mockingbird: The name Atticus Finch might as well be synonymous with the title of "world's greatest dad." And of course Gregory Peck did even better things for the character when he played the role in the 1962 on-screen adaptation (photo above). In this Harper Lee classic, set in the 1930's in racially-segregated Alabama, Atticus Finch teaches his two children, Scout and Jem, of the importance of respecting each individual, regardless of their skin color or socioeconomic status. Atticus, a widower, holds true to his principles even when to do so means to face social ostracism and outright threats. It's hard not to be inspired by Atticus Finch and his quiet, humble brand of integrity and strength.