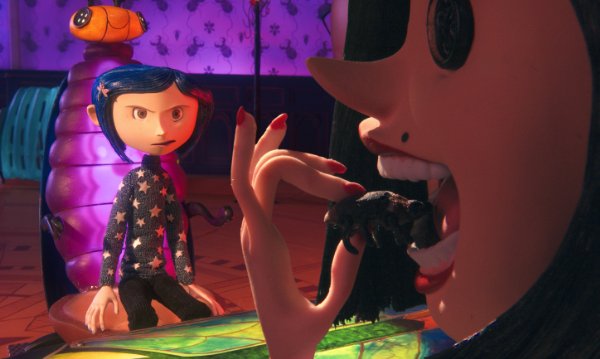 It is relatively simple, for me, at least. This annual list does not include expensive but unoriginal films based on comic books, video games, graphic novels, old movies that were bad, old movies that were good or sequels. It includes everything else and strives to recognize that a documentary, animated or foreign flick should be judged on its own merits and is potentially as valuable as any live action feature made in America. Are you all right with that? You better be.

2. Duplicity
The biggest success story of the studio system last year. Writer-director Tony Gilroy shows phenomenal range in his follow up to Michael Clayton, with this corporate espionage romance-thriller that feels like the 21st century equivalent of Charade or Topkapi. Julia Roberts and Clive Owen are perfectly suited, it moves like greased lightning and Gilroy pulls the rug out from under the audience at the end, making it all the more rare and enjoyable.

3. Moon
Duncan Jones, son of David Bowie, shows remarkable directorial chops and his script, co-written with Nathan Parker is existential, ironic and without plot holes. Sam Rockwell, as a lonely Moon worker who learns there are clones of himself vying with him to leave the job after three years, is a wonderful blend of sad sack, desperado and clown. For an indie, it has a remarkably clean, detailed and effective look. Worth three bloated space operas in its brilliance.

4. The Baader Meinhof Complex
Uli Edel's historical action flick on the German revolutionaries of the Red Army Faction covers a wide swathe of 60s and 70s action but never shortchanges the real life characters, their loves and allegiances all over the globe. The complexity of anti-Nazi radicals Andreas Baader, former journalist Ulrike Meinhof and others bombing establishment targets gives us pause when evaluating the causes of political violence.

5. The Last Station
Director Michael Hoffman wrings deserved tears from this very touching look at the last days of Russian author Leo Tolstoy, played with great authority by Christopher Plummer, aided flawlessly by Helen Mirren as his insecure wife, with fine work from James McAvoy and Paul Giammati as conspirators who wish to ensure his financial dedication to socialist causes.

6. Hunger
Easily the most unique film on the list, painter Steve McQueen has a joltingly poetic vision in exploring the 1981 IRA hunger strike in Northern Ireland's Maze prison and how Bobby Sands became a pawn as well as political icon as he willingly starved to death. The film shifts expectations of time, imagery and viewpoint, making it anything but a typical prison drama.

7. O'Horten
Norwegian writer-director Bent Hamer has a unique ability to create quirky characters without making them cloying or cute, as in this unpredictable tale of a retired train engineer who has a series of spiritual misadventures in the twilight of his life. In the end, a deep rumination on finding meaning in one's life, with plenty of chuckles along the way.

8. A Serious Man
The Coen Brothers do weird wonderfully well but here, they show careful control of their storytelling. Michael Stuhlbarg is perfectly put upon, as a Minnesota professor in 1967 whose personal and professional life spiral out of control, forcing him to reevaluate everything, including Judaism, marital fidelity and the purpose of the family. Spot-on cast and an ending that packs an ethical wallop tops this smart dark comedy.

9. An Education
Danish director Lone Scherfig uses Nick Hornby to adapt Lynn Barber's early 60s British memoir about a gorgeous and brilliant girl (a major debut from Carey Mulligan) who falls for an older man (Peter Sarsgaard) who is a married con artist. Tremendous cast, including Alfred Molina as an easily impressed father and Scherfig shows a marvelous eye and feel for the period.

10. The Hangover
Not only flat out funny, this script by Jon Lucas and Scott Moore, directed by Todd Phillips, is a breath of fresh air, structurally teasing us with gradual revelations during a hilariously out of control road trip to Vegas, prior to a wedding. Look out for Ken Jeong as an effeminate, Asian gangster with ridiculously fun facial expressions.