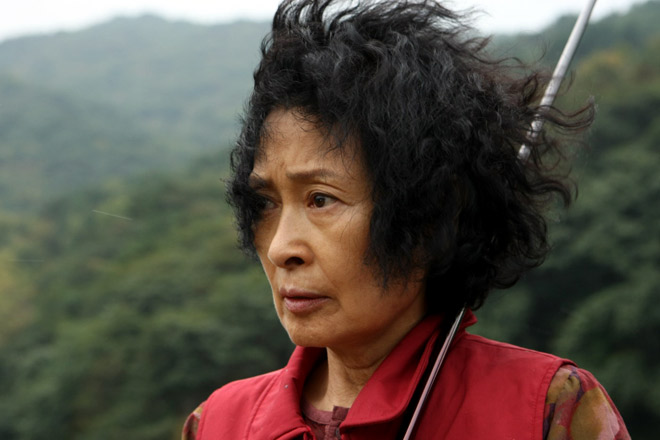 South Korean horror helmer Joon-ho has elevated his work with this ingenious thriller about a doting acupuncturist-herbalist (Hye-ja Kim) who believes her mentally handicapped 28-year-old son has been unfairly blamed for the murder of a young woman. Mother has such verve, unpredictability right to a staggering conclusion and Kim, the grand dame of South Korean film actors, is nothing less than remarkable.

Argue all you want about Roman Polanski's moral universe. He is still one of the great living directors of suspense and mystery. Ewan McGregor is the titular writer tasked with cobbling together the life story of a former UK prime minister (Pierce Brosnan, modeled after Tony Blair). Olivia Williams almost steals the movie, as the embittered and wily wife of the P.M. and Polanski manages to keep one on the edge of the seat, even when two people are simply talking. The mystery of the film's conclusion is fitting for the perfect paranoia thriller of this decade.

Paul Giamatti has proven himself able to hold his own with anyone onscreen, and here he is the eponymous Canadian TV soap producer whose three marriages and possible homicide are part of the timeline. Novelist Mordecai Richler's hilarious and heart-tending work is expertly adapted by Lewis and scripter Michel Konyves. Giamatti's breakdown after being caught in a meaningless affair, ending the marriage to the love of his life, is a wrenching but perfect example of this film's careful calibration.

Certainly, this is bound for Oscar nominations, featuring as it does the cream of British and Australian film acting. Colin Firth truly deserves a gold statuette for the furious, humiliated, stammering King George VI whose unconventional speech therapist (a delightful Geoffrey Rush) must also be a psychological therapist to help the King deal with unavoidable public speaking during the eve of British involvement in World War Two. Helena Bonham Carter and Derek Jacobi are spot on and if you are not trying to finish the sentences for Firth's character, you are not fully human. Uplifting and elegiac filmmaking.

This is a bang-up year for Paul Giamatti, who had a secondary role in this view of the passing of literary giant Leo Tolstoy (Christopher Plummer, also Oscar-worthy). Helen Mirren is a perfect complement, as the wife who disdains Tolstoy's socialist leanings and James McAvoy impresses as the writer Bulgakov, put in the position of being a spy. The tears that Hoffman earns at the end of this graceful period piece are completely and utterly earned.

Bar-Lev, the director of the spellbinding documentary My Kid Could Paint That, suggesting a child prodigy artist was a fake, has done it again. In investigating NFL-star-turned-war-hero Pat Tillman, the director reveals how American hero worship and the Pentagon jointly try to bury the truth of Tillman's death in Afghanistan by friendly fire. A film to enrage and engage, and inevitably inspire, thanks to the heroic strength and toughness of Tillman's mother to find the truth, no matter how much we wished to avoid it.

Clearly, this has been quite a year for docs and fact-based political drama and Doug Liman wisely casts Sean Penn and Naomi Watts as former Ambassador Joe Wilson and outed CIA operative Valerie Plame Wilson. Without car chases or silencers spitting bullets, the cold, destructive precision of the Bush-Cheney administration, taking down two critics of the Iraq War is plenty scary but also very real, as Penn and Watts depict so effectively how the Wilsons saw their professional and personal lives torn apart.

Tom DiCillo has remarkably captured the formation, elevation and degradation of the seminal L.A. rock group The Doors with rare footage and a sensitive narration by Johnny Depp. Showing Jim Morrison's fiery brilliance and self-destructive alcoholism in equal measure, the film's numerous film sources are captivating and never has the trapped quality of life for band members John Densmore, Robby Krieger and Ray Manzarek been more clearly or painfully etched.

Alex Gibney is easily the most important documentarian working today, as evidenced by films like Enron: The Smartest Guys in the Room and this year's Client 9: The Rise and Fall of Eliot Spitzer. On top of that, he has explicated clearly, entertainingly and sometimes shockingly what a financial death grip lobbyist Jack Abramoff and former congressmen like Tom Delay had on this country. Should we have another global disaster, when we pick up the pieces, there will be Gibney's work to remind us of its causes.

Director Argott went to school in Philadelphia, the setting for this rich documentary about the $25 billion modern and post Impressionist collection of Dr. Albert Barnes and the battle for its control. More than an internecine struggle for public versus private art exhibition, The Art of the Steal ventures into corporate control of art, the use and abuse of charges of racism in modern society as well as the overriding question: who gets to decide what is in the public good when it comes to the sale, analysis and exhibition of fine art. A doc with the complexity of a great novel.