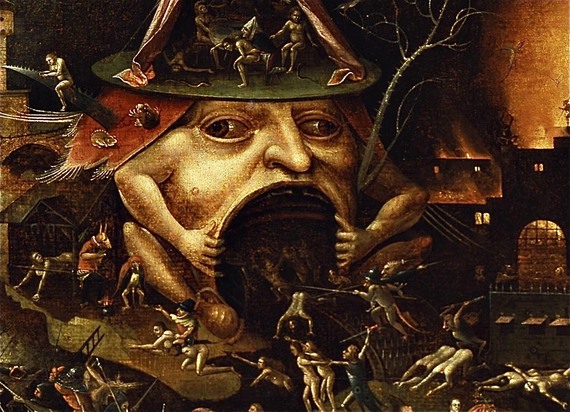 Whatever happens on Election Day, the fact that close to half of American voters are willing to embrace the most dangerous and disgusting presidential candidate in American history makes me tremble for my country. With just three days until we choose our fate, here's my top 10 of the catastrophic nightmares currently slouching toward Washington.

1) Climate change. Environmental policies rooted in denial, ignorance, and greed would do irreparable damage to this planet. Time is literally running out. Four years of suicidal idiocy could be irreversible. For this alone, a vote for Trump is both senseless and unforgivable.

2) Nuclear threat. Giving control of the world's most powerful military, not to mention the nuclear codes, to an emotional toddler is clearly insane.

3) Fascism. Believe me. I alone can make America great. Everyone else is stupid. Trump is part of a worldwide erosion of democracy by a resurgent authoritarianism. Fear and hate have made many sell their souls to naked power. When fascism spread in 1930s Europe, Americans were confident that "it can't happen here." Now we aren't so sure.

4) Hatred. Racism, bigotry, misogyny, bullying, scapegoating and political violence have been making a shocking comeback, with Trump as their enthusiastic cheerleader. He has endorsed and normalized the most vile sins of the American shadow. God help us should he and his alt-right thugs and cronies ever come to power.

5) Supreme Court. Imagine a Trump majority for the next 25 years.

6) From Russia with love. Trump's crush on Putin, combined with his own stupendous ignorance, would make him Russia's perfect fool. Throw in Trump's extensive financial ties to Russia, and the downside risk to global stability is considerable.

7) Republicans strike back. If the right gets its way, millions will lose their health care, the rich will get richer, the earth will be plundered, minorities will be oppressed, the debt will explode, and the lucky few will escape to Canada.

8) Cultural debasement. Under Trump, the Puritans' shining city on a hill would become a putrid swamp of vulgarity, sleaze, bigotry and selfishness. I don't really understand why so many Christians love this guy. To quote Holden Caulfield, "Jesus would puke" at the shameless vanity of Trumpworld.

9) Corruption. Trump's businesses, already suspect for their history of exploited workers, unpaid contractors, cheated investors, and shady international ties, would not go into a blind trust, but be carried on by his children. That should go well.

10) Stupidity. When I was laughing off the Trump candidacy in a London pub a year ago, a British woman gave me a sobering warning. "Watch out," she said. "When Boris Johnson ran for mayor of London, he made the whole political process dumber. Trump could do the same thing to you." And as we have witnessed, the bar has been lowered beyond belief. We are in danger of electing a man of unfathomable ignorance and stupifying shallowness, who has neither capacity nor desire to learn or grow.

That's my list and I'm sticking to it. God save our country from such a fate. I have recently read about conservative pastors warning their congregations that voting Democratic would condemn them to hell. I myself would never presume to foretell the afterlife of any voter. But I am pretty sure of one thing. No one need go to hell if Trump is elected. Hell will already have come to us.