If you're a labourer in the Gulf States, working under the draconian "kafala" system of modern-day slavery, the results of this year's Global Rights Index should come as no surprise.

The latest ranking of workers' rights includes the global top ten, of which no country should want to be part, and reveals Gulf States and North Africa workers are among the world's worst treated. 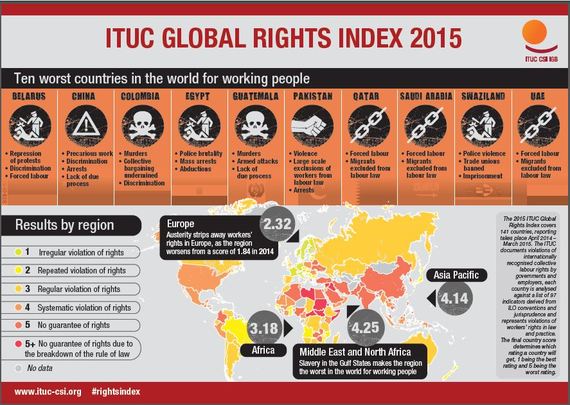 But in a worrying new trend, European workers endured the sharpest decline in their workplace standards in the past 12 months due to the brutal austerity measures across the EU.

The International Trade Union Confederation released the annual ranking today and it makes for sombre reading. Apart from a handful of exceptions, standards are lacking or in decline everywhere.

There's the case of police violently storming a peaceful sit-in in Turkey, where workers have no guarantee of rights. Then there's the Nigerian Volkswagen employees sacked by the carmaker for taking industrial action over poor working conditions and a lack of medical allowances.

Apart from Austria, Finland, Netherlands, Norway and Uruguay - those countries with top scores - the survey showed every country needed to treat its workers better. And those with falling standards are hardly economic backwaters, the likes of the United Kingdom, Russia, Spain and Hong Kong join Burundi, Dominican Republic, Iran and Georgia on that list.

International labour standards prescribe access to fundamental rights for all workers, but as corporate power and inequality grows internationally, these results show governments and employers have improvements to make.

So without further ado, here are the world's worst performers for 2015 in alphabetical order:

Workers in this Eastern European country face discrimination, forced-labour, and repression of protests. The case of hunger-striking workers jailed for protesting their unfair dismissal continues. This follows labour laws introduced by President Lukashenko that prohibits farming and forestry workers from being able to leave their jobs at will that the President himself compares to serfdom.

China makes the top ten for widespread cases abuses, workers employed in precarious work and the country's lack of due process. Strikes and pickets are illegal and workers involved in either face threats and harassment by both employers and government officials. There's also widespread discrimination and the chance of arrest for speaking out.

Colombia is the world's capital for murders of unionists, with 22 killed in the past 12 months alone. The figure would have been higher had two assassination attempts been successful from would-be assassins on motorbikes gunning for notable trade union leaders. Bystanders were not so lucky. Colombian workers also endure discrimination and having their collective bargaining undermined.

Egypt can be a tough place for workers with its cases of police brutality, mass arrests, abductions and attempted assassinations. In June last year, 500 workers of a national steel company protested an unpaid bonus promised to them with a two-hour strike. The company retaliated by calling the police and suspending 16 workers, many of whom were unionists. Media recently reported Egypt has now criminalised striking and will penalise striking workers by forcing them into retirement.

Murder, armed attacks and a lack of due process is the reality for Guatemalan unionists and their leaders. Throughout the last 12 months, leaders of the country's various transport, municipal and market workers have been gunned down. Coca-Cola campaigned against what it called "untrustworthy" unionised workers in Guatemala, giving raises to non-members and delaying those for unionised workers. Workers who protested this treatment with an overtime ban were sacked.

Pakistani workers face large-scale exclusions from labour law, arrests and violence. Last year protests were held condemning the murder of eight labourers in Balochistan. Earlier this year, trainee police officers who had not been paid for seven months took to the streets before were subject to baton-charges and arrests.

As a Gulf State with its infamous kafala system, Qatar can be a living hell for migrant labourers, excluded from labour law and under a forced labour system akin to a modern slavery. Once in Qatar, migrant workers can have their passports seized, their contracts torn up and be forced to work for wages less than a third than what was offered. Worksites are often dangerous, including those preparing the infrastructure for the 2022 World Cup, and workers can be arrested and detained for long periods for speaking out.

The situation is similar for in Saudi Arabia, which employs a staggering 8.3 million migrants. Migrants make up 90 to 95 per cent of the private sector workforce but are excluded from labour law and endure forced labour akin to slavery. Kafala links the migrant's work permit to the employer's goodwill and newcomers are not allowed to change jobs or leave the country without written consent of their original boss. The slow legal system means many are stranded without work but without the ability to go home. It's truly awful.

Swaziland makes the top ten worst places for workers because of its repressive regime of intimidation, police violence and imprisonment. Trade unions are also banned and authorities have used anti-terrorism laws to crack down on union leaders under the guise of national security. Two activists are currently still in prison after a year since their arrest without verdict. One is 65-year old diabetic Mario Masuku who contracted pneumonia in detention.

Non-national workers make up more than 88 per cent of the population in UAE. Migrants are excluded from labour law and endure forced labour, with excessively long hours, seized passports and changed contracts a part of working life. Migrant workers in UAE also don't have the right to join a union or go on strike, so those that speak up risk prison and deportation.

So what must governments do to get off this list ?

They must respect workers' fundamental rights enshrined in international law, including the right to associate freely and to collectively bargain for wages and conditions.

Secondly, and importantly as corporate power grows, countries need to ensure companies operating on their soil respect the rule of law and the rights of their employees.