When it comes to the top things to do in Japan, including Kyoto, Tokyo and beyond, most travelers have a list of major sights, shrines, parks, gardens, restaurants, museums, or neighborhoods to explore. But for many, Japan's unique culture is an attraction unto itself and simply being immersed into the unfamiliar is the best experience of all.

Here are ten experiences not to miss in Japan.

#1 Sleep on the floor 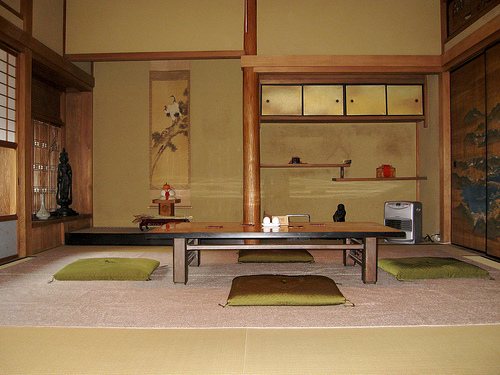 Forgo the typical western hotel for a Japanese inn called a ryokan. Even though ryokans are typically more expensive than hotels, and usually come with a couple rules (a curfew, for example), they give you an intimate glimpse into Japanese customs: peaceful gardens, communal baths, the opportunity to wear a robe (yukata) in public any time of the day.

They also offer kaiseki (elaborate and highly traditional) meals and simple rooms with sliding rice-paper doors, shrines, tatami-matted floors, and futons (which are laid out on the floor each night). If sleeping on the floor doesn't sound comfortable, have no fears: most ryokans provide padded quilting and cushions to soften the experience. 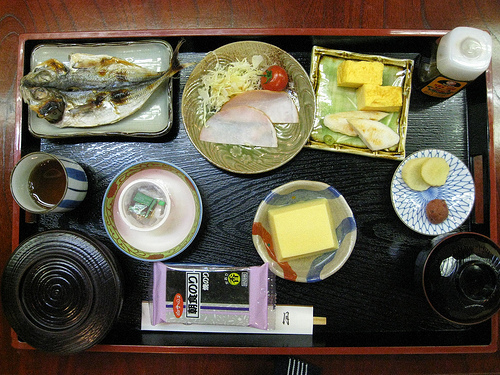 Food is the most elemental expression of a culture, so while in Japan be sure to try a traditional Japanese breakfast (if you're staying at a ryokan, it's often included).

Visit the Tsukiji fish market to see where some of the fish comes from. 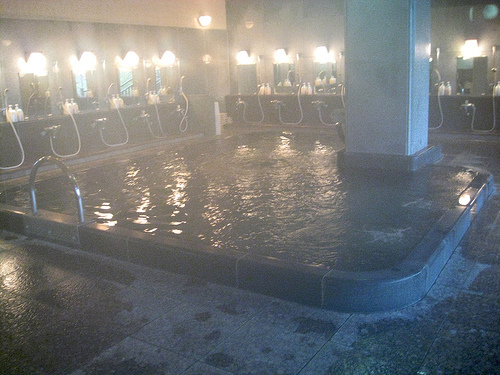 Put fears of public nudity aside and dip into a steaming-hot pool at a communal bath. These are known as sento or onsen - the latter uses water from hot springs. Japanese traditionally bathe in the evening, but communal baths are open for several hours in the morning as well.

Don't worry about soap and shampoo - these items are always provided, along with moisturizing lotion, cotton swabs, and hair dryers. Just be sure to first wash yourself at a shower surrounding the bath, rinsing all the soap off your body before getting in.

Soaking in steaming hot water is relaxing, meditative, and a great way to immerse yourself in Japanese culture. Communal bathing is a tradition that goes all the way back to AD 700. 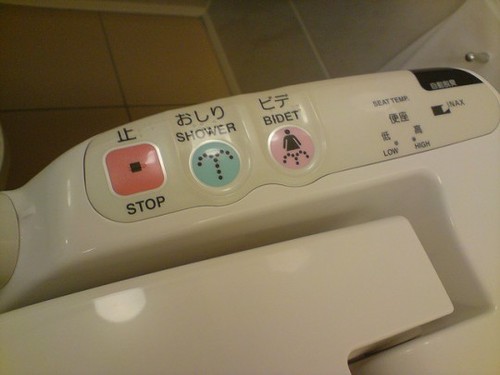 My mother taught me to never sit on a public toilet seat, but in Japan, it's hard to resist: The seats are warm. And the comforting feeling a warm toilet seat provides is hard to express... all I can offer is that the experience is a lasting and fond memory of my travels in Japan. Being on the cutting edge of technology and electronics as it is, Japan's toilets plug into the wall, and often offer more services than just a warm seat. Many have something akin to an armrest with buttons that operate bidet-like features and fake flushing sounds for the shy. 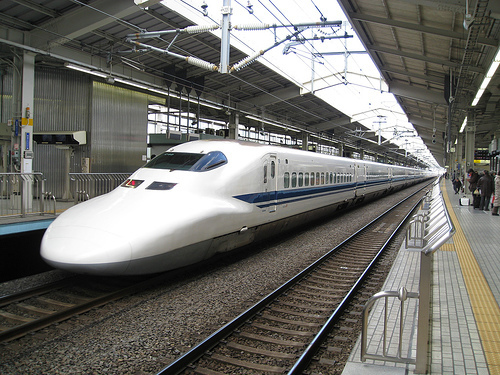 With 12,400 miles of track, high-speed bullet trains called Shinkansen can take you pretty much anywhere you want in Japan at speeds close to 186 mph (300 km/h). The trip between Kyoto and Tokyo takes a mere two hours.

The trains are operated by the Japan Railways Group, who offers seven-day, 14-day, and 21-day rail passes for unlimited travel on all JR lines throughout Japan. It's a great value if your itinerary includes a lot of destinations.

A pass is also convenient, and does away with the hassle of figuring out how to purchase tickets. Simply show your pass to the station attendant and you're good to go. This is especially handy as the passes work for JR's city metro lines as well. The only hitch is you must purchase a rail pass before arriving in Japan, so plan accordingly. Also note that you can organize a Mt Fuji day trip from Tokyo by bullet train over on the Viator site, including the popular Mt Fuji & Hakone from Tokyo (return by Bullet Train) trip. 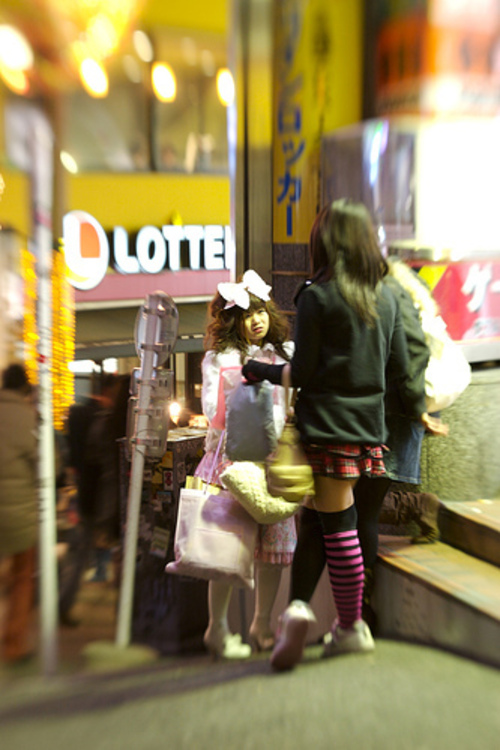 No matter what city you happen to be, there will be shopping districts. And that always makes for good people watching, especially in Japan where teenage fashion is so varied and extreme. Find a coffee shop or restaurant with a good view to while away a few hours. This is especially fun on a weekend in Tokyo's Harajuku district, or any day of the week above Shibuya's famous Hachiko crossing.

There's a Starbucks with a great view of the crossing, with hundreds of pedestrians weaving in all directions at once in a mesmerizing stop-go-stop dance timed to the traffic lights. This type of crosswalk is called 'scramble crossing' and while there are about 300 in Japan, this one is the busiest, as it's located right in front of the busiest train station in the world, Shibuya Station. 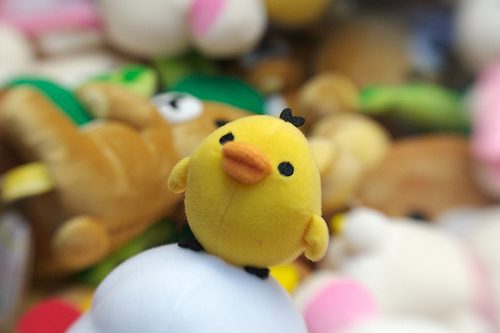 Even if your days of throwing tantrums in the toy store are long over, indulge your inner child and spend some time browsing the dense shelves of six-floor toy stores. They sell everything from Miyazaki movie paraphernalia to scary Goth dolls, radio-controlled cars, and plastic figurines of just about any fictional character ever drawn or imagined. If the shops get too crowded, head over to an arcade and get yourself a cuddly stuffed creature from one of the many 'claw' game machines. And keep your eye out for vending machines that sell capsule toys -- there's one outside the Ryoan-ji Temple in Kyoto that dispenses Hello Kitty lunch bags for a couple of bucks. 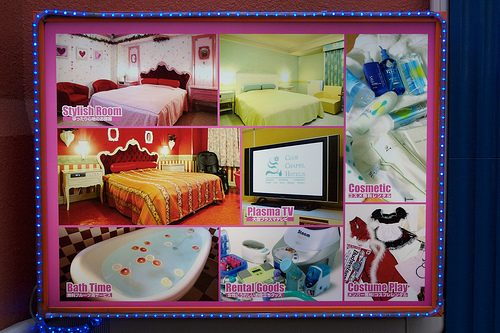 Take a 'rest' in a love hotel -- so named for the activities of lovers that transpire within. Although some look ordinary and unassuming, they're usually easy to spot.

While the whole idea may sound kinky, a romp in a Love Hotel is apparently quite normal to the Japanese, who often have little privacy at home. 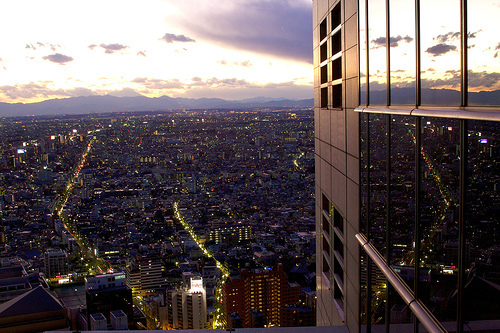 If you've seen the film Lost in Translation, you'll know the view from the "New York Bar" in Tokyo's Park Hyatt Hotel. It's spectacular, and well worth shelling out the 20-odd dollars for a cocktail. From 750 feet in the sky, the immensity of Tokyo is a sight to behold, especially when the city is lit up a night, full of red blinking lights that make it seem as if the city was breathing. And from here, you can actually see the curvature of the Earth.

If you're only interested in the view, it's best to get here in the late afternoon/early evening to avoid the nightly $20 cover charge for live music (the cover charge starts at 8 p.m.). The bar also offers a casual dining menu, and includes a $60 hamburger. 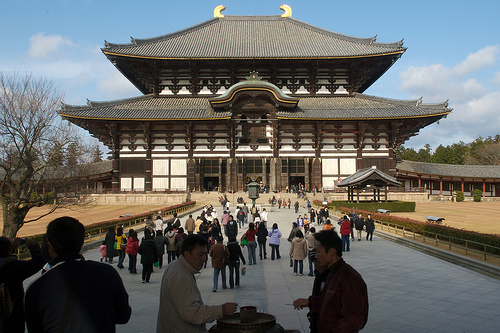 A visit to Japan is not complete without visiting a temple. Kyoto alone has several thousand of them. Built with wood and simple in design, Japanese temples are quietly beautiful, usually set in the peaceful grounds of a garden. Kyoto is the place to go.

Spared destruction during WWII for its historical importance, today the city is home to countless temples and shrines considered national treasures. The nearby temple-laden city of Nara makes a great day trip from Kyoto, if only to visit the famous Todaiji Temple, the world's largest wooden building.

-Contributed by Cheryn Flanagan for Viator