Set in the forested canyons of Topanga, Calif., the recent 7th Annual Topanga Film Festival was unusual for two reasons: first, its cutting-edge theme -- neuroscience and cinema -- and second, the fact that this four-day festival was a community-based event, run totally by volunteers, from celebrities like Rosetta Arquette and Elijah Wood to eager, young film scriptwriters driving the shuttles between the screenings. There was even a masseuse giving Thai massages for free to all the panelists.

The town bustled non-stop with film screenings, celebrity discussions and aesthetic-scientific debates going on in an elementary school-cum-movie-theater, a church-cum-"church-of-cinema" and even a tree nursery. I myself was hosted high in the hills in the beautiful cabin home on the property of Randall Einhern, director of the TV series "The Office," who also turned up as the juror for the short film competition. Another couple of nights, I stayed in the expansive bedroom suite of the Tuscali Mountain Inn, hosted by B&B owner Bruce Royer, who is also a producer, and who also turned out to be driving the shuttle one night.

I have rarely seen so much community effort pitched in to make such an exciting cultural event happen. 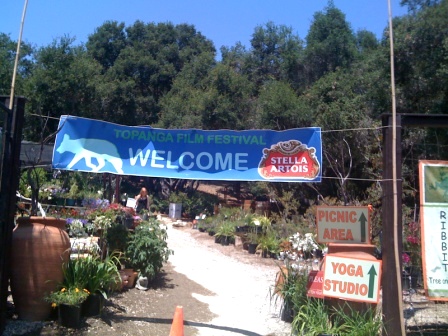 The brain child of Topangan residents Urs and Sara Baur, independent filmmakers, the festival started on a screen in someone's backyard and now features more than 30 films, a dozen salon discussions and workshops and even a dance showcase. And each evening is capped by a community party, including one free wine-and-hors-d'oeuvres splurge, sponsored, once again, by a local (a film editor-turned-wealth-investor who charmingly noted that income rises when one leaves the industry).

Now for the unusual topic: neuroscience and cinema. In academic circles, this conjunction is relatively new -- much like neurolinguistics, neuromusicology and all the other neuro-fields that have been spurred by the phenomenal discoveries in neuroscience in the last 20 years. The basic question behind the investigation is what makes film such a compelling art form. What is happening in the spectator's brain while watching images flicker on a screen to sound? Why are we so emotionally invested -- and even transformed?

The idea is that rather than film analysis, fMRIs (magnetic imaging) can provide some answers. For example, scientists in a new field, neurocinematics (a term coined by Princeton scientist Uri Hasson and colleagues), have used fMRIs to show that brain activity may be identical in different viewers when watching the same film. This means "some films have the potency to 'control' viewers' neural responses." The hypnotic power of the seventh art (whether a film is watched on an iPhone or a screen) may be unavoidable.

A central question seems to be how "emotion" (and empathy) sectors in the brain are set off by visual and auditory cues: no one can be absorbed in a movie unless emotion is aroused. Neuroscientists came to Topanga from all over the U.S. -- including the nearby, famous USC Brain and Creativity Institute, as well as Washington University in St. Louis -- to speak with actors, writers and film directors on panels such as "The Art and Science of Empathy," the "Neuroscience of Directing" and "Comedy: What's So Funny?" Moderating most of these panels was the articulate, winsome LG Taylor, a scriptwriter, who also happened to be the publicist for the festival -- and my shuttle pick-up at the airport (all as a volunteer). 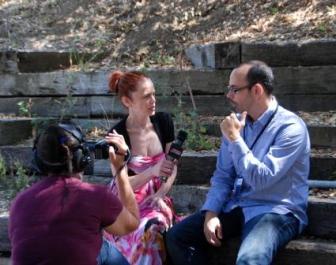 It turns out, as we learn from one panel on "empathy," that scientists can now distinguish which areas of the brain "light up" (in other words, become more active) when a human being feels empathy -- and who feels more empathy than others. Another finding (from Dr. Steven Quartz): our brain makes decisions about whether we are attracted to something (a red Corvette on the screen, for example) before we actually know it (hence the pernicious spinoff of this new science: neuromarketing).

We also had several panels -- appealing to the artists among us -- from the filmmaker's perspective, on the brain and creativity. Actors Melissa Leo, Ellen Geer and Diane Salinger joined neuroscientist Dr. Jonas Kaplan to discuss what happens when the actor tries to "imagine" an emotional state. Another lively panel had writers discuss with neuroscientist Robert Bilder the ideal conditions for producing a work of writing. With a wry sense of humor -- and charts galore on the board -- Bilder came up with a spiraling snake theory: the brain is most creative when merging new sources of information with a stable cognitive system, the ying and yang of production. For creative success, he added (in a very cool side point), one must "inhibit habits, the impulse to inertia, resist the first thing that comes to mind" and allow the new to flow.

At the end, the conclusions drawn from this eclectic merging of art and science remained inconclusive -- flickers in the dark, I would say. The field is just too new, and the brain too vast. Perhaps we are more involved in a film than a book, for example, because we are primarily visual learners. Or perhaps it is because of the "mirror neurons," the neurons in our brain that imitate what we see. No one really knows, yet.

Indeed, the most tangible brain-art experience was not a panel at all, but a fun, new app-gadget termed "MyndPlay." Enthusiastic East Asian-British entrepreneur Tre Azam flew out from London to show us the bio-feedback video game he invented, in which one watches a movie and the outcome is determined by the player's brain waves. Azam sat us in a makeshift movie box (built of recycled old jeans, an ecological invention of one of Urs Baur's clients) and put probes on our head. The challenge is to be either calm or focused, the two operative brain states (creating alpha or theta waves) that these probes can supposedly measure, connected to a software program that uses a binary system to interpret them. I really enjoyed playing "tug of war" with a few boisterous Brits, who teased me to beat them, as I concentrated my brain to pull the rope to my advantage. Supposedly, this game -- soon to be marketed on cell phones -- will help train people to be more calm and focused, as they see the outcome on screen. I myself, no video-game addict, could have done the archery exercise for hours, especially with Tre Azam behind me cheering on -- "Focus!" -- as the video arrow left the video bow. 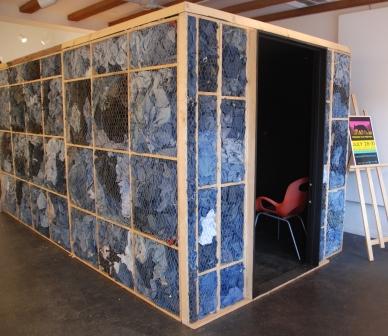 Neuroscience was not the only conversation going on. The festival actually was most interesting in its detours: the workshops on creativity, storytelling and imagination, and even one on Native American elders. This is Topanga, after all, a town where the inhabitants speak of themselves as "Topangans," and where most I met seemed to be ecologically, spiritually or entertainment concerned, a health environment of mind and body that I, coming from the more world-cynical Paris, found whimsically refreshing (especially with the Pacific ocean just down the winding road below).

(The co-founder himself is exemplary of this avant-garde community ethos. Along with being a filmmaker, Urs Bauer is an advertising consultant for two ecological clients, one of whom, IC:O, makes items out of recycled clothes worldwide, hence the black box screening room. I was greeted with my own water bottle when I arrived, to save on plastic.] In fact, one of the most entertaining workshops was a spiritual pep talk of sorts, by United Artists photographer Norman Seef. He explained his model for creative success using audio-visual aids, such as a chart pinpointing how one goes from crisis to flow, to compelling videos of himself, an outsider-to-artist success, interviewing Tina Turner, Ray Charles, Herbie Hancock, etc., about how they kept true to their inner child creativity -- and made it. While I doubt that the model works as faultlessly as the charts would have it (not every dedicated musician signs up with United Artists), this inspirational speech left more than one of the audience in tears. Many hugs followed.

My own personal favorite learning tidbit was on another tangential topic: film scoring. Cliff Martinez, the composer for soundtracks for such films as Steven Soderbergh's "Traffic" and "Solaris" and Nicolas Refn's new film "Drive" (and, of course, a Topangan local), explained that one of the goals for scoring a scene is to "not be redundant." For a sentimental scene, for example, you don't want sentimental music. And for a fast action scene, it's interesting to make the music slow.

As for the films, they varied from the somewhat cheesy new-age (such as one about a group of Americans who find spiritual recovery in the Mexican pyramids) to a surprisingly thrilling motorcycle journey through the Himalayas by a bunch of American boys (and girls) guided by an ever-charismatic Rishikesh local Anand, hence the title, "The Highest Pass." The shots of riding through the mountains to an exhilarating soundtrack by Jon Anderson -- as the bikers follow Anand, with his rollicking spiritual Hindu humor -- opened the festival to resounding applause.

Other films of merit included the brilliant short film "Clear Blue," Canadian Lindsay Mackay's tale about a lifeguard seduced by an elderly mermaid in the pool (a warning about obsession) and, in keeping with the transformational subtext of the festival, a documentary called "Re-Generation," featuring Adbuster founder Kalle Lasn, Noam Chomsky and Amy Goodman speaking about the media-induced apathy prevalent among the new generation of Facebook-iPhone-video-game addicts.

I especially enjoyed the closing night short-film festival, again a Topanga community event, held outside by a waterfall, with booths set up for organic corn, organic hamburgers and organic California wine, with hundreds of filled chairs lined up before an enormous movie screen.

"Storytelling is a way of expressing our humanity," said the entrepreneurial Urs Bauer, in his easy, Swiss-German-Topangan way. "I wanted to create a digital campfire."