Topher Grace of "That '70s Show" fame knows a thing or two about entertainment. The 35-year-old actor went straight from his high school auditorium to playing Eric Forman at the ripe age of 19, telling The Huffington Post, "I never acted before 'That '70s Show,' it was my first audition. I was doing nothing up until my freshman year of college and then all of the sudden I was on this show."

But Grace is looking to make his own mark on society in a new, refreshing way. He's decided to create, launch and edit the new website Cereal Prize, a playground for pop culture treasures, including blockbuster movie throwbacks, re-edited trailers, unaired pilots, funny sketches and music mashups.

Grace gracefully accepted HuffPost Celebrity's #nofilter challenge and proved that despite it all, he's still a down-to-earth guy who enjoys snacking on sugary cereal while watching cartoons.

When's the last time you cried?
"Benjamin Button." That movie just slayed me. I'll be honest, I went to boarding school when I was younger, so you kind of learn that it's not cool to cry at that age. But something about "Benjamin Button" ... You know when you haven't cried in a long time, so you cry a little too much because the faucet kind of opens? Like, wooooof.

What's one thing you do alone that you don't do in front of someone else?
See earlier answer.

What happens in your recurring dream?
I do have a thing about getting a good grade in a class that I never showed up for in high school. And then someone notices and I have to go to the class the day of the big test and I have to read the entire textbook the night before and understand it.

I have the same exact dream.
What does that mean?

Maybe that we're unprepared for life?
Maybe it means you and I have to start studying harder or something!

What's the working title of your autobiography?
I'd call it ... You know what, let me promise America something: I won't write a book about myself.

Do you think it's okay to recline your seat on an airplane?
Oh yeah, I don't know why they make us put that up.

When do you feel most anxious?
That was a good thing having to work while I was younger because you kind of put getting nervous about stuff out of your head. I don't think I even thought about being nervous. Somebody asked me the other day what "That '70s Show" was like when we got started and I said it was like "The Hunger Games." We were like a bunch of kids, all from different places, doing stuff in front of the nation, you know what I mean? We all had specific skills. So, I don't get too anxious about stuff anymore.

That must have been interesting, because wasn't it everyone's first big gig?
Yes. Ashton [Kutcher] modeled, Mila [Kunis] and Danny [Masterson] had done a little TV and Wilmer [Valderrama], I think he had done like one commercial.

What or who is overrated right now?
Twitter and Instagram. Just because they leave you with just a couple of options. It's such short content, so there's no way to say something -- well, I'm sure there is a way to say something, you just have to be a lot smarter than me to fit it into 140 characters.

Is a good friend hard to come by?
Yes. My experience has been, just like everyone else, that it's hard to find great people.

Do you find that as an actor, you're friends with more people in the industry?
I'm not just friends with fellow actors, but I find that a lot of people are out here in LA. I go out of my way to make sure that's not the case, but I do have a lot of friend who are actors. Still, there's just as many or more great people who are out there who aren't actors. I think it's good to have a nice, healthy group of people all doing different things. A lot of my friends don't even work in Hollywood, they just happen to live in LA.

Describe one time you thought, "This is harder than it looks."
I just did the new Christopher Nolan film, "Interstellar," and this is just like the biggest movie I'll probably ever be in and he's so graceful and kind of peaceful about this thing, but I know he has to deal with all this stuff. I've seen his movies, their scope is amazing, so I just gained a lot of respect for him by working with him.

What are you most afraid of?
Having to tell jokes on the spot.

When do you feel most at peace?
When I'm at home in Connecticut. My folks still live in my childhood home and so when I'm home with them, I usually feel the best. I went home and lived there because I was doing a movie in Greenwich two summers ago and it was the best summer of my life, because I was working and I got to sleep in my bunk bed. It was great.

What's the most unusual thing in your wallet?
I'll go find it if you want me to! But I don't know ... Cash and then the credit cards!

What technology do you want to be invented in the next 10 years?
I'm a huge fan of teleportation. I love to travel, but I hate actually traveling, so it would be great to just be where I want to be and not have to deal with the plane ride and everything.

What sense would you be most afraid to lose?
I guess sight because I really am a big fan of movies and stuff, way before I was involved in film. So that would bum me out if I couldn't see. 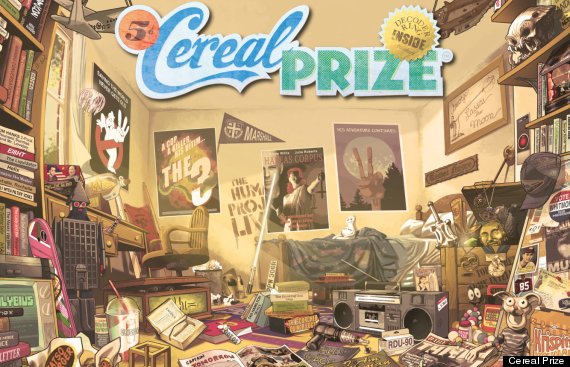 "I want it to have that kind of Saturday morning feel when your folks are still asleep, you come downstairs, make that really sugary cereal and watch cartoons," Grace tells HuffPost Celebrity. "I didn't really want it to be a 'save the world' type thing. I mean eating sugary cereal and watching amazing throwback cartoons is the closest thing I've ever seen to world peace."

Check out the cartoon short "Fez & Friends," which will appear on Cereal Prize, below.