Tor looks and acts like a browser from 1999 -- the ones where you could make a cup of tea in the time it took a GIF to load.

But it's more than that (no one would put up with that level of inconvenience otherwise). Tor is a privacy protocol that can be used to browse the Internet while anonymous. The IP address linked to users by websites won't be their own; instead, Tor assigns them a random IP address that they can change at any time. 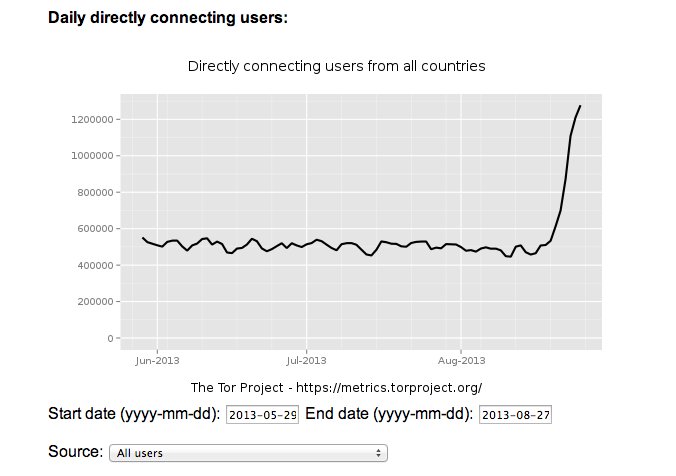 But the spike from 600,000 daily users to 1.2 million didn't immediately follow PRISM, which came to light in early June. Instead, Tor usage started spiking in mid-August after several other services that provide anonymity to users were shaken by post-PRISM backlash.

Shortly afterwards, under pressure from the U.S. government, privacy-centric email services Lavabit and Silent Circle also shut down. Those who relied on such encryption services may have switched to Tor after the shutdowns.

Another possible explanation for Tor's spike is the release of the Pirate Browser by the Pirate Bay team. The Pirate Browser circumvents censorship by moving its users to Tor when they encounter a website blocked in that user's country. A randomly generated IP from Tor lets the user avoid country-specific censorship.

On Aug. 13, Gigaom reported that the 3-day-old Pirate Browser had been downloaded more than 100,000 times. That's not quite enough to bring Tor from 600,000 to 1.2 million daily users, but the business Pirate Bay gave Tor also must have helped. In addition, Pirate Bay mentioned Tor several times on the Pirate Browser's website.

Whatever the cause, Tor's anonymous denizens aren't hurt by the usage spike. Its security increases when more people use the network.