This week, I carried a Torah, not an unusual experience for a Rabbi -- except this Torah had traveled 1,000 miles from Selma, Alabama, to Washington, DC. It was carried along the way by nearly 200 Reform Rabbis and hundreds of others who walked in partnership on the NAACP's America's Journey for Justice.

My role was to carry the Torah in the final days of the Journey. My first day was through Virginia, on day two I brought the Torah to synagogue for Rosh Hashanah, and then on day three back to Virginia for the last miles across the Memorial Bridge and up the steps to the Lincoln Memorial.

As I carried this Torah over the three days, I felt not just the weight of the scroll itself. I felt the weight of obligation upon all of us to live up to its the words calling us to pursue justice, equality, and freedom, all qualities sacred to the core beliefs of the United States and of Judaism.

The weight of the Torah was not upon me alone or upon any one of the 200 rabbis or upon any one leader of the NAACP. The Torah scroll was held high by NAACP President Cornell William Brooks, and passed from person to person along the Journey. The people who helped to carry the Torah shared their personal stories along the way--stories of their struggles for justice, their battles to overcome discrimination, and their compelling desire to live the words of Torah. To follow the dictum, "Justice, Justice, you shall pursue."

On Rosh Hashanah, the Torah briefly took a break to welcome the New Year at Temple Micah in Washington, DC. Again, I was honored to carry the Torah - this time throughout the entire congregation during a "Hakafah" - the moment when the Torah scroll is carried around the congregation for every member to honor its presence. The excitement of members of the congregation that this special scroll came to their home for the Holy Day was highlighted when four young people read from the Torah scroll, reminding us that we keep Torah's words alive by passing them from generation to generation.

Justice is at the heart of our faith as Jews. And we know that we must continue even in this day to cry out for "liberty throughout the land" and to march for equality. Today in America, that ideal is far from secure. Because of the pressing challenges in America - and throughout the world - the CCAR, along with the Religious Action Center of Reform Judaism, joined the NAACP in in the Journey for Justice to focus attention on protecting the rights of every American to uncorrupted and unfettered access to the ballot box, to a fair criminal justice system, to economic equality and sustainable jobs, and to accessible and equitable public education.

This is not a new task for us. Members of the Reform Jewish community are deeply connected to the battle for social justice, both from the text of the Torah and from our own historical experiences. Along the Journey, I was reminded of the many American rabbis who led the way in the pursuit of justice. I recalled Rabbi David Einhorn, who in the 1860s was run out of Baltimore for speaking out against slavery. Rabbi Maurice Eisendrath, who led the way in the 1960s for the Reform Movement's commitment to social justice, inspired me. I was motivated by another model of justice, Rabbi Sally Priesand, the first woman rabbi to be ordained, who joined the Journey for Justice last week, and who has led the way for equality for women and others in her lifetime. I thought as well of Rabbi Denise Eger, the current CCAR President, whose participation in the Journey exemplifies her dedication to fighting for quality for the LGBT community and for all people living in our society.

I am greatly encouraged by the participation of so many Reform Rabbis in the Journey for Justice, who are showing that once again the pursuit of justice is making Judaism meaningful for another generation of Jews. Today, social justice is a gateway into Judaism for so many rabbinical and lay leaders in Jewish life (as confirmed in a Pew Center Study). For this reason, I was especially excited to see so many younger rabbis carrying the Torah along the 1,000 miles joined by members of the Jewish community, of all generations, young and old, and those in between, along with members of all ages from the African-American community, and others. 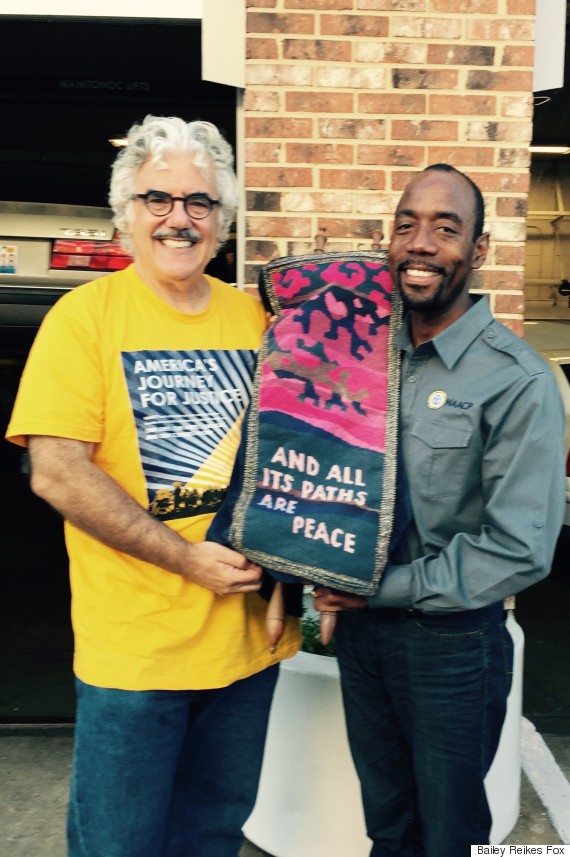 "Justice, justice you shall pursue." These words of Torah ring true today as they have for thousands of years. Our pursuit for justice continues. We have known great injustice throughout our history and thus have a particular obligation to pursue justice not only for ourselves but for all. As so many have taught, including Reverend Martin Luther King, Jr, and Rabbi Abraham Joshua Heschel, none are free until all are free.

The High Holy Days call us to recommit ourselves to the values core to Jewish life including our obligation to work for a world of freedom and equality for all. We must not fail. Indeed this is a Journey for the soul of all America, and for all the world. We shall pursue justice from Selma, Alabama to Washington, D.C. and beyond.