WASHINGTON -- It is possible to build a tornado-proof home. But the cost would be excessive, and your house would certainly be the ugliest on the block.

In the wake of the devastating tornado in Moore, Okla., on Monday, the discussion has turned, in part, toward how individuals and families in vulnerable areas can protect themselves from future catastrophes of this kind. Certain steps can be taken, experts say. But hardening an entire home is likely not one of them.

"It is possible to make your home tornado-proof," said Larry Tanner, a structural engineer at Texas Tech University’s Wind Engineering Research Center. "But it is not very practical ... Number one, it is extremely expensive. Number two, it is probably not going to be very aesthetically pleasing."

"Is it possible? Yes," said Randy Shackelford, a structural engineer with Simpson Strong-Tie, a company that makes high-strength metal connectors, and an executive member of the National Storm Shelter Association. "But it is not a home that anyone would want to live in."

The real issues with respect to a house's vulnerability involve the doors, windows and roof, explained Shackelford and Tanner. The structures of each don't tend to stand up to heavy winds, let alone projectiles created by the twister's debris. And even if homeowners do install "tornado glazing" or "tornado-safe room doors," they still have to deal with the garage, which is also vulnerable.

To be completely safe, the entire house would need to be "missile-resistant." What this means, according to Shackelford, is that the building would have to be able to withstand 250 miles-per-hour winds, which can launch items as big as a 15-pound two-by-four at 100 mph at walls. To reach that level of protection, one's home would have to be made "with solid concrete, no windows and a steel door," he said.

It makes far more sense to compartmentalize tornado fortification, added Tanner. "You can protect your family so much more inexpensively and safely with an aboveground safe room that has been tested and engineered or with a belowground shelter that has a tested door on it," he said.

Shelters, whether above or below ground, can be installed by a homebuilder or constructed by the homeowner. The cost ranges anywhere between $4,000 and $10,000.

"Just like an automobile, you can get a little Chevrolet or a Mercedes," said Tanner. "But the key is, is it a tested shelter."

The instructions for creating one are fairly straightforward. The Federal Emergency Management Agency (FEMA) put together guidelines in 1998, which it has updated several times since, titled "Taking Shelter From the Storm: Building a Safe Room For Your Home or Small Business."

Safe rooms for tornadoes, the guidelines say, do not have to be large, because twisters tend not to last long. A 5-square-foot area will likely suffice. The preferable location is a basement, where the safe room can be "an entirely separate structure with its own walls." One can use pre-existing basement walls for the safe room, but they should be reinforced.

A safe room can also be built as an addition to the outside of a slab-on-grade home, the guidelines say. But it has to have proper footings, concrete or concrete masonry framing, and a watertight roof. Built properly, those rooms too can provide "near absolute protection," FEMA concluded in its August 2008 report.

The cost-benefit analysis of creating a safe room differs, of course, based on where one lives. The South and Midwest are more vulnerable to tornado damage than New England is.

In recent years, tornadoes have caused a massive amount of building destruction. While neither Shackelford nor Tanner knew the exact number of homes destroyed by these types of natural disasters, FEMA reported that as of August 2008, tornadoes had resulted in insured losses of more than $1 billion. USA Today reported in 2011 that "tornadoes (and related weather events) have caused an average of 57% of all U.S. insured catastrophic losses" since 1953.

Installing a safe room wouldn't prevent much of that damage. But experts say that safe rooms do save lives. Tanner recalled surveying the scene in Joplin, Mo., after a tornado touched down there in 2011.

"We didn’t find belowground shelters because Joplin is mostly built over an old mine," he said. "But we found 11 aboveground shelters by various manufacturers in neighborhoods that look just like you're seeing in Moore ... They totally protected their occupants."

UPDATE: 2:48 p.m. -- Michael Lingerfelt, a fellow at the American Institute of Architects, agreed that fortifying an entire house to withstand a tornado, while possible, would make that home a terrible eyesore and not exactly the greatest place to live.

"You would have a concrete bunker. I mean, seriously, think back to your elementary school days. The shelters constructed to observe an atomic bomb blast ... that's what you would need," Lingerfelt said. "You can have windows but you would have to have so many layers of glass and make sure the frames were anchored in the concrete and impact-resistant windows."

It would be far more practical, he said, to build a safe room, which can be done on the cheap. And while it makes sense to put the tornado-proof safe room in the basement, he added, such a location isn't exactly prudent if one's home might be hit by hurricanes, what with the flooding and all.

UPDATE: 4:06 p.m. -- A reader in Florida named Peter Juen, who works for Insulated Concrete Structures Inc., emailed an objection to the idea that tornado-proof homes are expensive and ugly.

"They can look like any stick-built house anywhere in the country," Juen wrote. As evidence, he sent a picture of his own home, which he built in 2003 and which he said he's financed, in part, by saving $3,000 a year on hurricane insurance.

"We have been building them for 15 years. They exist all over the Caribbean, Central and South America, where people know concrete is always stronger than lumber, no matter how many hurricane straps you nail on," wrote Juen. The picture of his home appears below. 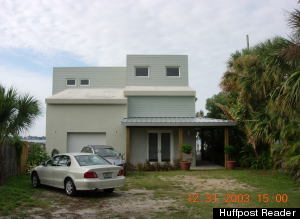