There is at least one upside to the massive drought that covers more than half of the lower 48 states: a near-record low number of tornadoes. In contrast to last year, when swarms of tornadoes killed hundreds during the spring and early summer, this year has seen a flatlining of tornado numbers since June. Through July 23, there had been just 12 tornadoes recorded in the U.S. this month, and unless a severe weather outbreak in the Northeast on Thursday results in a large number of twisters, it’s likely that the U.S. will break its record for the fewest tornadoes in the month of July.

In fact, the U.S. may even break its record for the least tornadoes in any summer month. 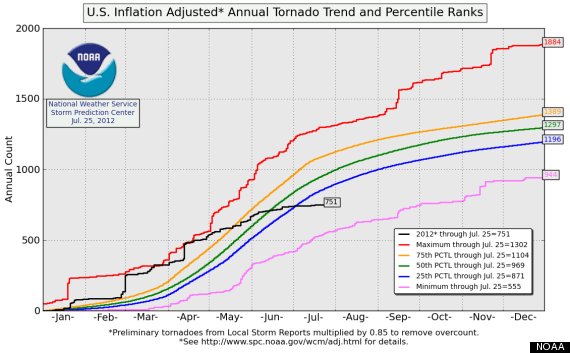 Tornado counts after adjusting for the effects of inflation due to changes in tornado observation methods.

According to Harold Brooks, a tornado expert at the National Severe Storms Laboratory in Norman, Okla., the key ingredients for forming tornadoes just have not come together very often this summer, and the weather pattern that has spawned the devastating drought is a key reason why.

The weather has been characterized by a sprawling area of High Pressure over the Central U.S., which has brought stifling heat and much below-average rainfall to a broad swath of the country. St. Louis, Mo., for example, has reached or exceeded 105°F a record 11 times so far this year, which is more than occurred during the Dust Bowl in 1934. During July this year, 3,908 daily high temperature records have been broken or tied in the U.S., and 169 of those records have been all-time high temperature records.

One might think that all of this heat would provide ample fuel for severe thunderstorms. After all, a warm air mass is a main ingredient in severe weather. However, for tornadoes to form, there also needs to be high humidity, strong jet stream winds, and wind shear, which is winds that change direction or speed with height. In July, those ingredients have not come together in the right amounts, at the right time.

The heat dome discourages storms by causing the air to sink, warming as it does so, and choking off any storms. The dry ground also discourages storms by releasing less moisture into the air, cutting down on the instability available for storms to form. The jet stream has been shunted well to the north, across the U.S.-Canadian border, depriving thunderstorms of the wind shear needed to form large hail and tornadoes. 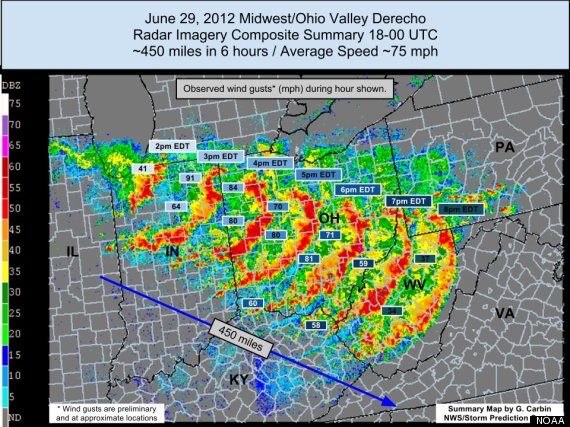 Severe weather events in June and July have mainly been straight-line wind producers, like this "derecho" storm complex on June 29, as seen in this radar time series.

At the outer edges of the heat dome, thunderstorms have been repeatedly set off by cold fronts and strong upper level winds, but they have mainly produced strong straight-line damage, not tornadoes. “Hail and, particularly, tornadoes, depend upon large values of wind shear,” Brooks said in an email conversation. “With the ridge, the wind shear has been very weak and, as a result, non-tornadic winds have dominated.”

The least amount of tornadoes in any year since reliable records began in 1950 occurred in 1988, which was also a severe drought year, Brooks said. He does not expect this year to break that record, “but we could be second-lowest without much trouble.”

According to an article by meteorologist Robert Henson of the University Corporation for Atmospheric Research, the next-most quiet July after 2012 is 1960, which saw 42 tornadoes. When using data that has been adjusted to account for an artificial increase in tornado counts with time, due to population growth and better storm-detection technology, the least active July is 2007, when there were 73 tornadoes.

Brooks said June and July of last year were also not very active months in terms of the number of tornadoes, after a historically active and deadly spring. However, Brooks said, “June/July 2012 have been so non-tornadic they’ve made 2011 look big, even though they were well below long-term normals.”