There are film festivals all over the world. Few however, take over an entire city and engage locals and visitors on the level of the Toronto International Film Festival. An estimated 480,000 filmgoers attend screenings, eyeball celebrities and scout out the up-and-coming filmmakers at TIFF. 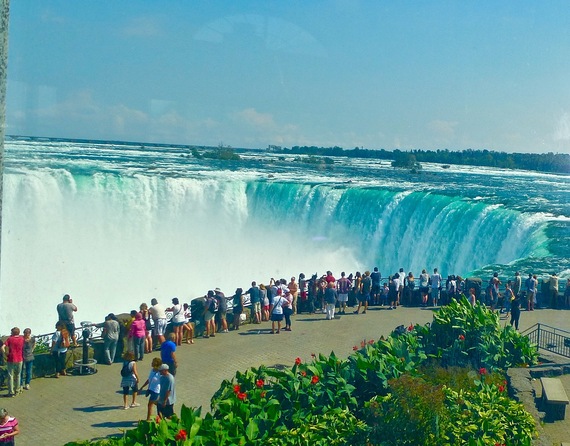 A view of Niagara Falls from the Canadian side gives a panorama of the three falls that comprise Niagara Falls.

As participants take in the festivities, they tour the city and the environs encountering historical sites, natural wonders, world-class restaurants, funky eateries and art shows. Sight seeing during the festival is a cool experience. But touring around Toronto--the most multi-cultural city on this side of the planet--is a real blast any time of the year.

1. Take a Daytrip to Niagara Falls - The big difference between Niagara Falls, Ontario and Niagara Falls, New York is that the Canadian side has the better, front face view. From a cliff over-looking the Niagara River you can see three falls: the American Falls; the smaller Bridal Veil Falls; and the massive Horseshoe Falls. Boats take you down river up to the roaring Horseshoe and it's as if you're entering a tropical storm. Winds blow, water fills the air and the feeling is overwhelming and cathartic. When you leave its like you've been reborn.

Hints: 1. TruExperiences Tours, the classy way to visit the Falls, will pick you up at your hotel in a Mercedes van and give you an informative guide who uses an iPad to show you facts and figures. They'll also take you on a side trip to nearby towns (see next two entries). 2. Pay the fee for the Journey Behind the Falls tour, which takes you into tunnels behind the Horseshoe Falls and onto an awe-inspiring platform that is right beside it.

2. Journey to Blissful Niagara-on-the-Lake -- 18 miles from the falls, past the Robert Moses Niagara Hydroelectric Power Station on the U.S. side and the Sir Adam Beck Hydroelectric Generating Stations on the Canadian side, sits the peaceful town of Niagara-on-the-Lake. It's positioned where the Niagara River meets Lake Ontario and you can see Toronto in the distance. Ambitious athletes swim the 32 miles from the lakeshore to Toronto as a badge of courage, akin to swimming the English Channel. The stately homes, manicured lawns and serene village are vaguely reminiscent of New York's Hamptons.

Hints: 1. Runaway slaves, who became soldiers and fought for the British during the War of 1812 in a segregated army, constructed the diminutive Fort Mississauga, which is now a historical landmark. 2. Greaves Jams & Marmalades on Queen Street sells Apple-Cinnamon Chardonnay Jelly and Sour Cherry Cabernet Jelly that are locally made. No kidding. 3. Conquer your fear of heights and take the Whirlpool Aero Car at Niagara Parks, a cable car ride high above the Whirlpool Rapids.

3. Freedom rings in the town of St. Catharines, Ontario -- Abolitionist Harriet Tubman started and ended many of her legendary Underground Railroad rescue missions in this city that neighbors Niagara on the Lake. People of African descent began settling in the St. Catharines, Ontario area around 1788 and they brought their religion with them. Many were followers of Rev. John Wesley, the founder of Methodism and a staunch abolitionist. They also followed Bishop Richard Allen, the founder of the African Methodist Episcopal Church (AMEC).

Tubman helped build and worshipped at the Salem Chapel, British Methodist Episcopal (BME) Church. She also rented a boarding house in St. Catharines that was used to resettle the newly arrived freedom seekers. There are African Canadians living all over Canada who are descendants of slaves who found freedom in St. Catharines. In fact, Lezlie Harper Wells, a fifth generation Canadian descendant of a fugitive slave from Kentucky in 1850, through her company Niagara Bound Tours, provides customized tours of the region. You get your choice of the Buffalo-Niagara Underground Railroad tour, or a bike tour to where the Anti-Slavery Act of 1793 was signed in Niagara-on-the-Lake, Canada, and more. Very unique, historical, informative and inspiring tours.

4. Walk around the Art Gallery of Ontario -- At 480,000 square feet, the AGO is one of the largest galleries in North America. Founded in 1900, it features a large collection of Canadian art, along with European, African and Oceanic art, and a modern and contemporary collection. It's a cultural center that hosts forums on social and arts issues. AGO also attracts traveling shows of international importance like the recent and very popular The Idea of North: The Paintings of Lawren Harris exhibit, which was curated by comedian/actor/musician Steve Martin.

Hints: 1. The AIMIA | AGO Photography Prize exhibit runs until January. 2. Chicago-based artist Theaster Gates takes over the fifth floor of the AGO's Contemporary Tower with an immersive exhibition exploring the potential of the house museum.

5. Take a flight of Fancy -- Toronto HeliTours offers different aerial tours, Wednesday thru Sunday, in Toronto's skies on helicopters with floor to ceiling windows. It's the best way to get an overview of Toronto. Head to the foot of Bathurst Street at the harbor, where there is an Airport Tunnel with a moving sidewalk and you'll be at the helipad in two minutes. Tour #1 is a 10-minute sky-high ride that gives you an eagle's view of the city's downtown. The helicopter lifts off like a feather before it swirls around CN Tower and the Rogers Centre stadium (home of the Toronto Blue Jays baseball team). Tour #2 covers everything that Tour # 1 covers, but we will also fly you further West to Humber Bay and High Park and we will take you north to St. Clair and then east to Casa Loma before heading back downtown.

Hints: 1. Take the ferry, at Bay Street at Queens Quay, to the Toronto Islands, the largest urban car-free community in North America and perhaps Toronto's best geographical treasure. 2. Rent a bike and ride around the islands. 3. Hanlan's Point Beach, a nude beach, is worth a gander and highly unexpected so close to the city.

6. Going Japanese -- At ki Modern Japanese + Bar, the highest-quality Japanese restaurant in Toronto, you can't go wrong starting with the Edamame-Pea Gazpacho with candied pork belly, tempura pea shoots + grape seed oil. The soup has the texture of milk, looks like lime green cream and features morsels of meaty pork belly and crispy pork belly skin. The sensations in your mouth will be indescribable. Move on to the ultra-fresh Seaweed Salad with assorted greens + sesame-ponzu dressing and the Skewered Atlantic Salmon with shishito peppers + citrus-kumquat glaze.

A plate of the Yuzu-marinated Rack of Lamb with ginger-mashed potatoes + balsamic teriyaki sauce is a perfect entrée. Ending with a bowl of Peach Cobbler will satisfy your sweet tooth.

7. Head to the Distillery District, not for the booze but for the daring French Cuisine -- 45 historic buildings surround the ultra hip and trendy, fine-cuisine French restaurant named Cluny Bistro & Boulangerie. Warning, don't expect to see ordinary items on the menu in this very creative eatery. Begin with the Salt Cod Donuts with smoked potato dipping sauce, or the even more ambitious Ginger-Chili Fried Frog's Legs with pickled celery, ginger-chili sauce.

Order the Steak Frites and you'll get your choice of three different cuts of meat (from cattle raised naturally, hormone and antibiotic-free in Grey County): Filet Mignon, Hanger Steak or Striploin. Finish your meal with the Warm Blueberry Tartlet with Greek yogurt sorbet, apricot compote and raspberry brandy cream. Don't be shocked if a model, actor or sports figure walks in. The word is out; this is the hip place to eat.

8. Dining on Dim Sum -- Chef Susur Lee, heralded as one of the "Ten Chefs of the Millennium" by Food & Wine magazine and a co-winner on the Food Network's "Iron Chef America," oversees the cuisine at this Dim Sum Tea House in the Soho Metropolitan Hotel. The menu at Luckee Restaurant & Bar is inspired by Lee's travels to Hong Kong, Shanghai, Beijing and Singapore. The room is reminiscent of a chic classy diner. You'd expect to get served comfort food, and in a way you get it Asian style.

You can't go wrong starting your meal with the Luckee Dim Sum Basket, a sampling of the chef's favorites. Or the Marble Dungeness Crab Ravioli with steamed dumpling with crab, shrimp & enoki. The scallops, prawns or squid in the Crispy Seafood With 'Golden Sand' entrée tastes like they just came out of the sea. You get all that in an atmosphere where patrons collectively moan and groan over the good taste of their food.

9. Chomping down on movie star burgers -- Wahlburgers is a friendly, two-story, gourmet burger joint and part of a new chain founded by celebrity siblings Mark and Donnie Wahlberg and their chef brother Paul. This Toronto location, also in the SoHo Metropolitan Hotel, looks almost like a sparsely furnished and unpretentious Japanese restaurant, only it serves the house specialty, slim burgers. They taste good. Better than those at Shake Shack, not quite as extravagant as the Kobe ones at The Old Homestead Steakhouse. But good.

Don't be timid. Try The Beast: Two 5oz. burgers, lettuce tomato, pulled pork with housemade blue cheese sauce, pickles and BBQ Sauce. Slap on a side of crispy onions and Paul's signature Wahl sauce and housemade cheese sauce. If you'd prefer not to clog your arteries past recognition, there's Jenn's Chicken Sandwich, Crispy Haddock Sandwich and a Portobello Sandwich too. Wash it all down with the house specialty, Wahlbrewski beer.

10. Stay at a hotel with a year-round indoor/outdoor swimming pool - The Sheraton Centre Toronto Hotel is just a five-to-ten minute walk to TIFF's Lightbox Theater, AGO, the Theatre District and all the aforementioned restaurants. The tall, 43-story, beige rectangular building faces Lake Ontario and CN Tower on one side, and Toronto's City Hall, which sits in Nathan Phillips Square, on the other.

All of its 1,372 guestrooms were recently renovated. That however is not the Sheraton's best calling card. The hotel features a two-acre waterfall garden, the largest gym in a downtown Toronto hotel and the largest pool, which happens to be an indoor/outdoor pool that stretches from an indoor Jacuzzi area to a sweeping patio with lounge chairs and shrubs. In winter months a glass wall comes down midway, and you swim from a warm room out into the cold in heated water even with snow on the ground. For weekend athletes or families with kids, this is Toronto's prime oasis.

There's a lot to do in and around Toronto during the crowd-pleasing Toronto International Film Festival. And this city of overtly friendly people is a tourist and good-time mecca all year around.