After more than a decade wandering across the city from season-to-season, LG Fashion Week said au revoir to their nomadic existence and has settled at Heritage Court on Toronto's exhibition grounds. Robin Kay, President of the Fashion Design Council of Canada and the city's fashion week fairy godmother, was right to insist that LGFW needed its own home but whether Heritage Court is it remains to be seen. While the venue is certainly spacious, it suffers from feeling like a trade show and there's nothing convenient about the location either -- hard to get to and nary a Starbucks in sight doesn't bode well for a feisty fashion crowd. 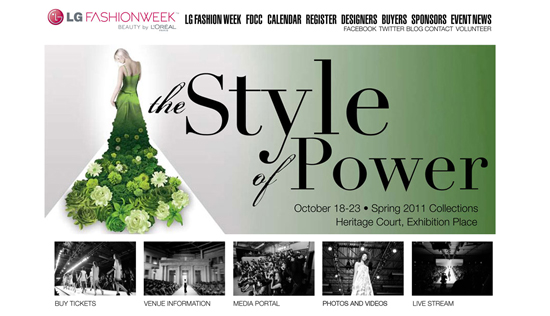 Find out more about LG Fashion Week at www.lgfashionweek.ca

Wings + Horns had fairly average spring basics for men, which were followed by jacket junkie label Smythe who stayed true to form with tailored linen jackets in soft shades, cropped in the back and patched with perforated leather on the elbows. Respected Canadian designer Denis Gagnon demonstrated finely skilled techniques with cut and proportion, while Wayne Clark sent down some very pretty fire engine-red dresses made of what looked to be flattering jersey with satin detailing.

Mikhael Kale closed the show with questionable dresses fashioned from a handful of fabrics, clear plastic paneling and crystal embellishments -- it looked somewhat futuristic, but mostly just confused and certainly not flattering for the average female. All the models trotted out for the finale, flooding the runway with a haphazard array of looks, none of which seemed to cause much delight in the crowds. 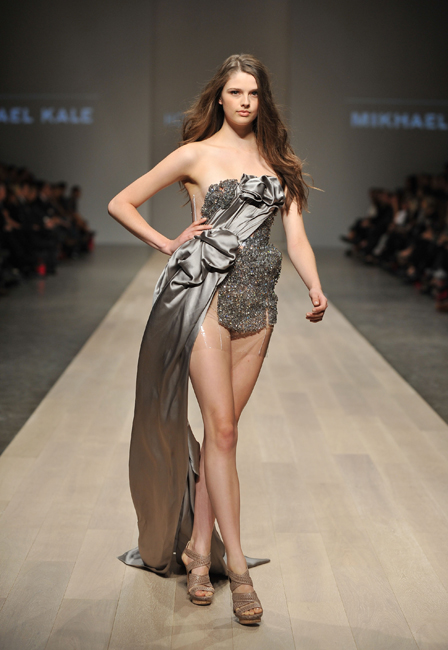 Usually a late-in-the-week player and perennial crowd pleaser, this season Bustle chose to close LG Fashion Week's opening night with their signature rowdy antics, strategically deployed to detract from the fact that the clothes are quite frankly, a bore. Toronto band Die Mannequin performed live for the show as male models with pompadours and funky glasses strutted down the runway in Bustle's poorly tailored suit separates. A pixelated paint splattered pattern was the only interesting injection into a tired collection of pastels, checks and floral prints that was styled with a Nowhere Boy-meets-Cali prep male in mind. Perhaps painfully aware that there was nothing exciting about the actual clothes, Bustle chose a self-described "sleaze rock band" to entertain and sent a female model down the runway in a man's shirt, only to flash her panties for photographers. And that's why they usually give out alcohol at their shows. 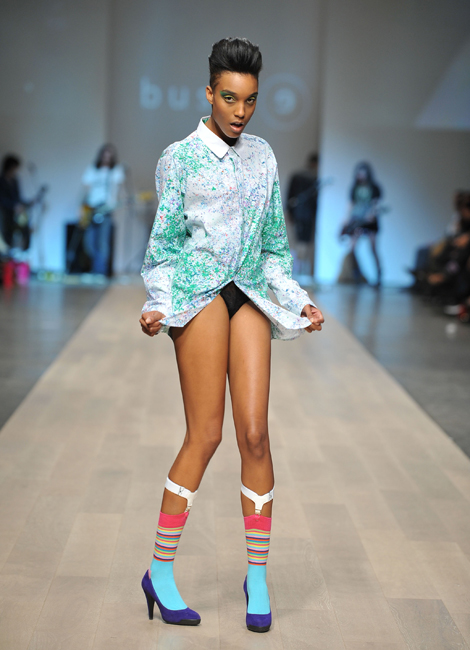 A model flashes her panties at Bustle. Photo: George Pimentel.

It was a lackluster opening night for LG Fashion Week but there are four more days for the industry to collectively redeem itself of something no one may remember anyway. So what's the point? The point is that there is some strong design talent in Canada, some real fashion enthusiasts and if we don't foster that now, no one else will. It's a shame that some of the best and brightest choose to show off-site but it wouldn't be very patriotic of us if we didn't give everyone a chance. After all, we are Canadian.

LG Fashion Week is streaming live from Heritage Court - check the schedule and watch the shows by clicking here.

Get the latest on what's hot and what's not at LG Fashion Week by following me on Twitter.