TORREON, Mexico, Oct 29 (Reuters) - In a five-year struggle with Mexico's most notorious drug cartel, the city of Torreon has suffered a 16-fold increase in murders, fired its police department and lost control of its main prison to the gang.

The Zetas cartel arrived in Torreon in mid-2007, and this center of manufacturing, mining and farming once seen as a model for progress has become one of Mexico's most dangerous cities.

Massacres at drug rehab clinics, bags of severed heads and gunfights at the soccer stadium have charted the decline of a city that a decade ago stood at the forefront of Mexico's industrial advances after the nation joined the North American Free Trade Agreement (NAFTA) with the United States and Canada.

Once enticing U.S. firms like Caterpillar and John Deere and Japanese auto parts maker Takata to open plants, Torreon has not attracted any other big names since the Zetas swept in.

Many people in the arid metropolis about 275 miles (450 km) from the U.S. border believe if Torreon cannot defeat the Zetas soon it may need to reach some kind of agreement with their arch rivals, the Sinaloa Cartel, and let them do the job.

Widely seen as the most brutal Mexican drug gang, the Zetas have so terrorized Torreon and the surrounding state of Coahuila that some officials make a clear distinction between them and the Sinaloa Cartel, for years the dominant outfit in the city.

"They (the Zetas) act without any kind of principles," Torreon's police chief, Adelaido Flores, told Reuters. "The ones from Sinaloa don't mess ... with the population."

Local politicians tacitly admit that deals with cartels, often unspoken, helped keep the peace in the past, before a surge in violence prompted President Felipe Calderon to mount a military-led crackdown against organized crime six years ago.

Calderon's forces have captured or killed many top capos around Mexico, but the campaign triggered fresh turf wars and a sharp increase in bloodshed, spearheaded by a new generation of criminals like the Zetas. Over 60,000 people have been killed in Mexico in drug-related violence during Calderon's presidency.

In Torreon, the Zetas took control of the local police, and in March 2010 they invaded city hall to demand that Mayor Eduardo Olmos sack the army general he had hired to clean up the force.

Subsequently, all but one of the 1,000-strong force were fired or deserted, and for a week Villa and his bodyguards were the only police. At first, the city behaved "marvelously," said Olmos. Then the shootings, armed robberies and kidnappings took off as the gangs turned Torreon into a killing factory.

According to local newspaper El Siglo de Torreon, there were 830 homicides in the first nine months of 2012 in the city's metropolitan area, home to just over 1 million people.

Greater Torreon had 990 killings in 2011, up from 62 in 2006. It now has a higher homicide rate than Ciudad Juarez, long Mexico's murder capital. Only Acapulco's is worse.

Flores insists that better days lie ahead, saying the Zetas have been weakened by security forces and by the Sinaloa Cartel, run by Mexico's most wanted man, Joaquin "Shorty" Guzman.

More than 90 percent of the hundreds of suspected gang members killed or arrested in Torreon this year have been Zetas, according to estimates by city authorities.

"They're nearly being finished off here," said the soft-spoken Police Chief Flores, standing on a hill above the city and gesturing at its impoverished western fringes.

Towering above him, a 72-foot (22-meter) statue of Jesus Christ with outstretched arms gazes across the urban sprawl that is now the bloodiest battleground in the Zetas-Sinaloa conflict.

Despite the setbacks this year, the Zetas still control Torreon's prison, police and the mayor's office say.

Lying at the crossroads between Mexico's Pacific states and Ciudad Juarez and Monterrey, and linking the south to the U.S. border, Torreon has long been a strategic hub for drug runners.

Locals say traffickers co-existed peacefully with legitimate businesses when Guzman's gang dominated here. At the very least, senior politicians in Coahuila have looked the other way, while some actively colluded with gangs, local leaders say.

"They're up to their necks in it, from the top down," one local business executive said of the politicians. "But don't put my name down or they'll be sending flowers to my grave."

But as the violence intensified and got closer to home, she lost faith. In this year's presidential election, Gomez backed the Institutional Revolutionary Party, or PRI, which ruled for most of the 20th century, in the hope that it can restore order. The party won the election and will return to power in December.

"Before, there was a pact, and things were calm. The drugs went to the United States and these groups didn't mess with the people. This is what we want so we can live in peace," she said.

Today, the economy is suffering. Garbage blows down the streets of Torreon's old town, passing shuttered businesses. The construction industry estimates about half the building firms are out of work in a city that had near full employment in 2000.

Big foreign firms are tight-lipped about the violence. A Caterpillar official said the company's security costs had risen, but that its business had not been affected.

One top business executive, who asked to remain anonymous, says many acquaintances have left to escape the violence.

Wearing a pained expression, he tells how a kidnapped friend had to give the names of other suitable victims to his captors as part of the ransom. His name was among the five given.

Despite that, the businessman argues that the crackdown on drug trafficking has been disastrous for his city, forcing gangs to resort to ever-more violent forms of money making.

He and many other locals look back to the days when a "Don't ask, don't tell" attitude prevailed and business was good.

President-elect Enrique Pena Nieto, who takes office on Dec. 1, has rejected negotiating with the gangs, mindful of the PRI's past reputation for cutting deals. But he stresses his priority is reducing the violence, then taking on the drug traffickers.

In private, some officials here say it may be impossible to avoid tacit deals with the cartels in certain areas unless the violence is curbed quickly. That means hammering the Zetas.

DEALS WITH THE GANGS

"I think the whole country wants the Zetas exterminated," said Raul Benitez, a security expert at the National Autonomous University of Mexico (UNAM). "And if he's successful, Pena Nieto will have the support to do what he wants with his drug war."

Polls show a large majority of Mexicans reject deals with the gangs, but a 2011 survey in the hard-hit state of Chihuahua next to Coahuila showed nearly 50 percent favored a pact.

The survey did not include Coahuila, where the Zetas' blend of co-option and coercion has become a serious embarrassment.

Several former state officials are under investigation by federal prosecutors on suspicion of working for the drug gang. On Oct. 7, marines killed Zetas leader Heriberto Lazcano in the state. Then his body was stolen from a funeral home by armed men.

When Torreon's Mayor Olmos began to root out the Zetas, the police went on strike. Calling a meeting in his office, he soon realized the officers who arrived were working for the enemy.

He described how a policeman slouched in a chair and wearing sunglasses held up a phone so that the Zetas at the other end could hear every word the mayor said. When Olmos refused to sack the police chief, General Bibiano Villa, masked Zetas surrounded his office, lining the stairs and the streets outside.

With the help of the media, Olmos broke the strike and forced all the police to take "loyalty tests." Only one, a woman, passed. He then rebuilt the force with recruits from outside Coahuila and the army, and bumped up pay by 50 percent or more. But infiltration is a "permanent problem," he says.

Olmos, whose father was kidnapped by a gang in 1996, says the cartels are "equally bad" and opposes making deals. But he admits there is growing public pressure to end the violence.

Even some politicians from Calderon's PAN wonder whether a review of the drugs policy is needed to pacify hard-hit areas.

"I think a lot of people think negotiating with certain groups may resolve this problem," said Rodolfo Walss, a PAN city councillor in Torreon. "Frankly, I don't know."

Back on the Cerro de las Noas hill, where the huge concrete statue of Christ looms above the city, the attitude of salesman Jose Angel Aguirre sums up the conundrum facing Torreon.

Saying "I would rather bury my son today than discover he was out there killing" for a drug cartel, Aguirre conceded he would accept the presence of one gang if it improved security.

"It would be better if one of the two sides won," the 58-year-old said. "Then there would be peace." 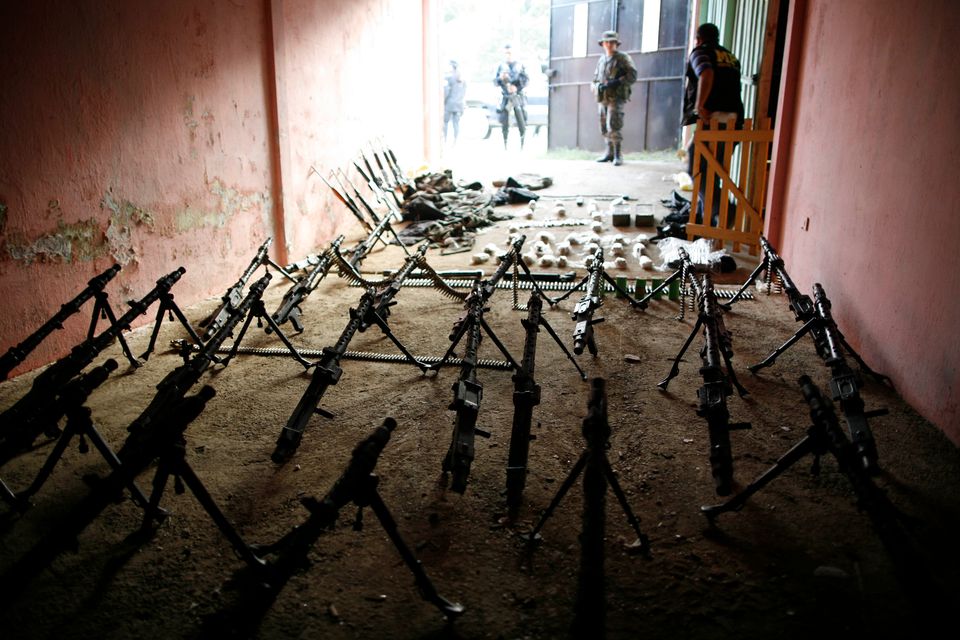 1 / 5
The Zetas were formed in the late 1990s by 14 soldiers who deserted from army special forces to work as muscle for the Gulf Cartel. Their name comes from a military radio code. <em>Caption: Weapons seized during a police and military raid are displayed in Coban, province of Alta Verapaz, Guatemala, Tuesday, Dec. 21, 2010. (AP Photo/Rodrigo Abd)</em>
AP Photo