When an abandoned tortoise called Schildi lost his leg, most likely from an accident, he had trouble adapting to his new prosthetic. The artificial leg given to him by his German rescuers had a double-wheel structure that made it difficult to turn corners, according the Local. But one of his veterinarians found a positively charming solution -- he fitted Schildi with a single Lego wheel leg. 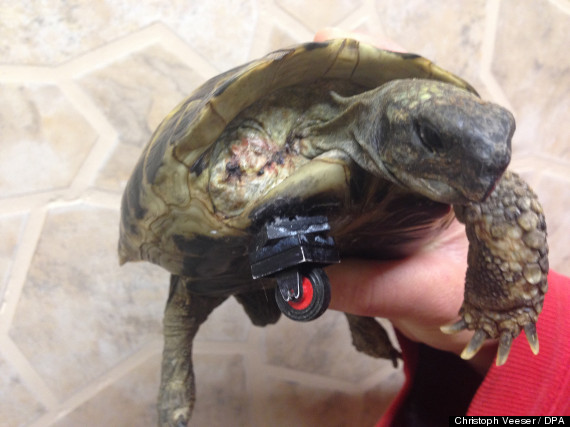 Dr. Panagiotis Azmanis, of a veterinary called Bird Consulting International, came up with the idea, and found the Lego piece after raiding a co-worker's daughter's toy box, according to Bild.de.

Now, with his new Lego leg, Schildi is back on the move, recovering at an animal rescue and "doing really well again."

"We will see him again once in a while for check-ups," Azmanis told the Local. "If he gets a 'flat tire' it will be a simple matter to replace the wheel. They move around quite a lot so I'd expect to see him for a new wheel about once a year."

We're dying from the cuteness.

Schildi, Abandoned And Disabled Tortoise, Gets Lego Wheel Prosthetic Leg (PHOTO, VIDEO)
13 Awesome Animal-Human Reunions
1 / 13
Dog Rescued After Tsunami
Ban was reunited with her owner in tsunami-ravaged Japan after a news channel aired dramatic footage of her being rescued from the sea. This is pure joy.