When life gives you lemons, make lemonade. When rats take your legs... get a pair of wheels?

Mrs. T the tortoise had some bad luck recently when rats broke into her hutch and gnawed off her two front legs and one of her hind legs to the elbow joint. Her owner, Jude Ryder of Pembroke, West Wales, didn't want to put down Mrs. T. She told the BBC that she spent the equivalent of $1,500 on vet bills before turning to her son, Dale, for help.

At first, they considered going to a cobbler to fit the 90-year-old tortoise with prosthetics, according to a video from the Telegraph (below). Unfortunately, it turned out that the rats had taken too much. 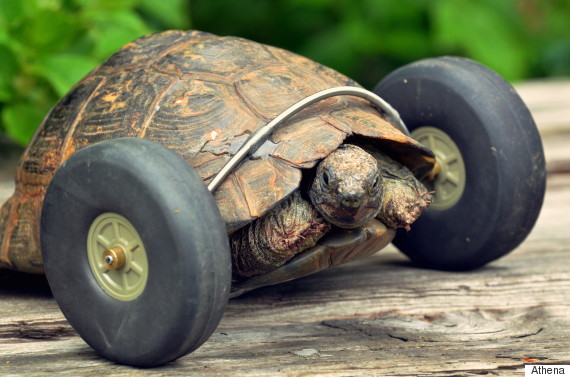 So instead, Dale fitted Mrs. T with a harness and some wheels. Now she's able to push herself along at twice her normal speed.

"It was like fitting her with a turbo charger. She's going double the speed she used to," Ryder told the Telegraph. "She uses her back legs to push herself along. She seems quite happy, but it's difficult to tell with a tortoise."