The inmate is forced to kneel in a 3 foot square box, motionless for months, until he or she dies. This is a description of the "punishment cell", the final stage of incarceration for North Koreans who are considered dangerous for the regime.

It is estimated that 23,000 North Koreans are at this moment locked up in about 20 concentration camps scattered about the country, perhaps since the 1950s, when the elder Kim (Kim Il Sung) was in power.

At the recent Thessaloniki Documentary Festival in Greece, more than four documentaries focused on the horrors of North Korea.

An eye-opening introduction to the horrors is N.C. Heikin's Kimjongilia, or the The Flower of Kim Jong Il.

The film intersperses state propaganda celebrating the regime -- pretty women in uniforms crooning songs in the fields while picking brightly colored fruit -- with testimonies from six defectors who managed to escape. Ticker-tape facts help the novice get the picture quite clearly. By law, if someone does something wrong (i.e. even drop a photo of the dictator on the ground by mistake) he or she becomes a class enemy, and with no trial goes to a concentration camp. The family is punished for three generations, so children, parents, grandparents are all carted off as well. Suicide is not a way out, as that too is a crime, punishable for three generations.

We hear harrowing stories: a child born in the camps witnesses countless executions before he manages to escape in his teens, another tells of making paper flowers l8 hours a day. Even freedom is not a pleasant story. A singer escapes to China, where she is kidnapped and sold to the sex trade for six years -- something that evidently is quite frequent.

Director N C Heikin, a New Yorker expatriate in Paris, told me that she felt compelled to make this film -- singular in its political nature for her, as she is normally a screenwriter for French television -- because of her own Jewish family background in the Holocaust. At a human rights conference in Japan, she had been shocked to learn that concentration camps, on such a large scale, still exist today -- and that few are aware of their existence. Going on to read survivor Chol Hwan's memoir, The Aquariums of Pyongyang , she then worked three years to make Kimjongilia.

The film has that fresh horror-struck tone. Indeed the power of the film lies in its naive approach. Heikin, formerly a dancer, intersperses talking heads with modern dance movements, the grace of floating white veils creating a metaphoric lament. 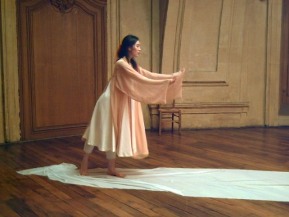 An even harder look into the concentration camps is Yodok Stories, by the celebrated Polish director Andrzej Fidyk, famed for his earlier film on North Korea (Parade ).

The film is based on a singular premise. Fidyk thought to himself: how can one best express the torture that goes on in these camps, given that no one is allowed in to film or photograph them?

Fidyk's brilliant idea: since the best product of North Korea is spectacle (Kim Jong Il uses acrobatic, spellbinding stadium performances to celebrate his divine stature with 20,000 actors and millions of flowers), then why not find one of the theater directors responsible for these national parades and have him dramatize torture instead?

The result is Yodok Stories: we watch as theater director Jung Sung San -- now in Seoul -- stages rehearsals of torture with fellow defectors as his actors, dancers and singers.

It is a bit odd to see a musical version of "put that stick between your legs until the flesh rots off" or uniformed girls being whipped by dancing guards -- but the result is pellucid. We hear the testimony of a defector who escaped from the Yodok camp (the only concentration camp one can escape from) and then we see the torture reproduced with precise dance movements.

We also sense the relief of the former inmates as they "creatively" reproduce their torture -- which turns them from victims to agents.

The most compelling scene: one of the actors in the musical is a former prison guard. All the actors break for dinner and boisterously drink and recount stories. The guard grins and demonstrates how he beat prisoners to death -- whack, whack -- and how he watched two guard dogs rip the throat out of a child. His fellow dinner-mates, all former beaten prisoners, chuckle and tease him.

Eventually this guard also got punished: for his father's suicide. Punished to three generations. The guard defected.

For such traumatic experiences, the defectors seemed relatively recovered, I noted to the director, calling him in his hometown Warsaw.

"You just saw the strongest," the director told me pointblank. "The elite who had the strength, ingenuity and stamina to make it. For every one of them, there are thousands crushed." 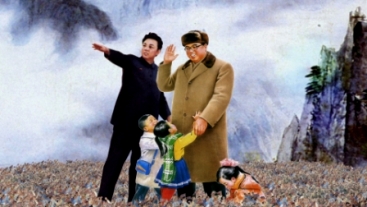 Or is the whole country crushed ? Fidyk's earlier Parade (1988) -- a film that made him famous in Europe -- gives an even more ominous picture. Filmed by Fidyk directly in North Korea, Parade only shows what the director was allowed to film, obeying to a letter the dictatorial guidelines. We have sentimental beloved shots of the Great Leader, Kim Jong Il, close-ups of biographies entitled The Great Leader, choral recitals of children chanting paeans to The Great Leader, pretty school-teachers prattling about The Great Leader.

The result is so extreme it almost seems a Chaplin parody of dictatorship. We hear of Kim Sung Jong's great hagiographic exploits : how he once sat on a rock in childhood (here we see the rocks, as if enshrined by the sun) when it came to him to get rid of Japanese colonial rule. Cut to an incongruous shot of a dead, stuffed lion, a gift to The Great Leader, with its paws outstretched uselessly in a museum room. The camera dwells on the immobile paws.

The British announcer in the film never betrays a sense of sarcasm, but what else can the audience think, after seeing the umpteenth shot of crowds waving paper pink flowers and chanting like religious acolytes when a Kim rises to the stage? The country -- which we guess is starving -- seems at least to have an abundance of flowers to throw at the dictator's feet, if not to eat.

Form becomes content: the camera seems unable to leave the crisp golf course-like lawns of the government compound or the homogenized faces of the children -- recreating a sense of enclosure. The human beings -- guards to guides -- speak like robots. The country seems like one big mausoleum.

Note that not all documentaries on North Korea depict the country as as a cheerless monolith of brainwashed puppets: Director Solrun Hoaas, in her wonderful Pyongyang Diaries, introduces the same oppressive Juche system, but also takes every opportunity to joke with and debate with the locals. A guide explains to her how George Bush uses propaganda, and she spars back and says, "But didn't you guys just use propaganda with that picture of me with the diplomats??" She films children smiling sheepishly at the camera -- like children everywhere -- until a policeman tells her to stop filming, and she continues anyway. At another moment, she taps a pretty guide on the shoulder: "Do you have a boyfriend?" The girl blushes and says, "Oh no!"

A most charming moment happens when rowing in a canoe, her guide confides to her about his newlywed, grinning with shy delight about how lucky he is to have her. We even find out -- in this rare documentary -- about the shamanism culture in Korea, and how it was re-incorporated by Kim Sung II.

The North Koreans may have concentration camps, dictatorship and oppression, but clearly they are not soul-less. 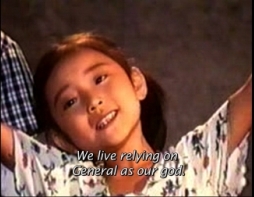 But clearly their situation has to change. Colonized for 35 years by the Japanese, decimated by the Korean War, ruled by two dictators for the last 60 years, the country seems, to say the least, stuck.

But what can be done?

I turned to Fidyk for an answer. The Polish director had spent decades obsessed with the plight of North Korea, informed in part by his own personal experience with oppression in his own country.

"What can be done about North Korea?" he said shortly. "Nothing."

He continued: "South Korea has no investment in a unified Korea. Who wants 20,000,000 impoverished, starving, uneducated masses entering their country? If it was bad when East Germany joined with West Germany, this would be a hundred times worse. And no, it is no solution when Kim Jong Il dies. It'll be the same. His son is just as bad. You know he was just arrested in Japan; he had tried to go see Disney World on a fake passport."

Nevertheless, Fidyk's own documentary ends with a hopeful idea: thousands of brochures about the upcoming musical about Yodok Stories -- including information about the concentration camps -- are rocket-shot into North Korea, over the demilitarized zone. A flourish of white papers fly up in the sky, rising over the trees.

A Hague prosecutor I know came up with a similar solution : Drop l,000,000 transistor radios, he offered, scratching his head. 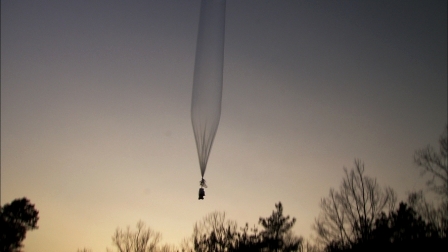