International Day in Support of Victims of Torture is observed each year on June 26, the day in 1984 when the United Nations Convention Against Torture was signed. This treaty, which the United States has signed and ratified, bans torture, cruel, inhumane and degrading treatment. The phrase "victims of torture" and the word "international" raise images of brutal regimes around the world, or of survivors of torture who have fled these regimes to come to our country for sanctuary and asylum. We Americans like to think of our nation as the "shining city on a hill," as a protector of human rights, a beacon for the rest of the world. The reality, however, is that widespread torture is happening today in our own country, especially in state and federal prisons and detention facilities. 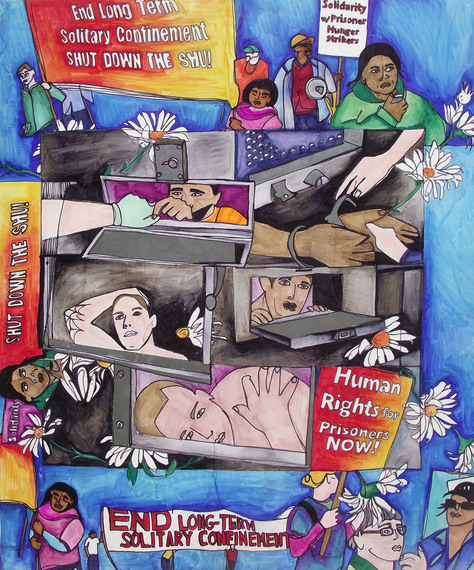 There has been increasing attention paid in recent years to the conditions and practices of solitary confinement, more often referred to as SHU (security housing units), with growing awareness of the immense physical, psychological and emotional damage it causes. Even tragi-comic television shows such as the Netflix original series, Orange Is the New Black have depicted the profound deterioration that being placed in conditions of isolated confinement renders. Yet, what viewers have witnessed on shows like OITNB is but the tip of the iceberg. In the United States, an estimated 80,000 people are kept in solitary confinement, many for years, some for decades.

There is no doubt that prolonged solitary isolation constitutes the torture, cruel, inhumane and degrading treatment banned by the Convention Against Torture. A current lawsuit filed by the Center for Constitutional Rights (CCR), also argues that prolonged solitary confinement violates the Eighth Amendment of our Constitution. Juan Mendez, the United Nations' Special Rapporteur on Torture, has said that solitary confinement in excess of 15 days can be considered to constitute torture and should be subject to an absolute prohibition.

California stands out from the rest of the country due to the number of inmates in SHU, and the length of time California inmates spend in SHU is also extremely high. In California, an inmate in SHU spends an average of 6.7 years; shockingly, many are locked up alone for decades. California is also unique in that it is the only state in which inmates are placed in SHU indefinitely not because of a specific behavior in prison, but because of alleged affiliation with a gang, a judgment made by prison officials with no independent oversight.

Just a few weeks from now, on July 8, the faith community and others will mark the one-year anniversary of last year's historic hunger strike in California prisons. At its peak, 30,000 inmates participated in the hunger strike, which lasted for two months. Inmates engaged in this peaceful, nonviolent action to protest and bring public attention to the intolerable practices and policies of SHU. A strong coalition of human rights activists, family members and loved ones of those incarcerated, and members of faith communities worked in solidarity with the hunger strikers to advocate for reforms through community awareness and contact with prison and elected officials. The hunger strike brought wide international attention to the egregious conditions of solitary confinement in California. Ultimately, inmates suspended their hunger strike based on the commitment of the chairs of the State Legislature's Public Safety Committees in both houses to hold public hearings about solitary confinement. These hearings have occurred, and there have been minor modifications in the regulations. Major, systemic reforms are still needed.

Communities of faith are increasingly active both nationwide and in California in the movement to significantly reform the practice of SHU. Faith traditions share a belief in the dignity and worth of every human being, that each person contains a spark of the Divine. There is, as a result, an ethical obligation to confront anything that degrades or causes suffering in all places and in any circumstances.

Confining incarcerated persons to such conditions serves no rehabilitative purpose and renders those subjected to it profoundly damaged psychologically. Half of all completed suicides in prison occur in solitary confinement. Further, the use of isolation creates a toxic environment for correctional staff. Ninety-seven percent of those who are incarcerated will one day be released, some whom are release directly from long-term isolation to the streets. We have a moral and practical obligation to end the use of prolonged solitary confinement in the facilities of detention in our own backyards.

On June 26, in observance of International Day in Support of Victims of Torture, the National Religious Campaign Against Torture, the American Friends Service Committee and a diverse group of faith leaders visited the headquarters of the California Department of Corrections and Rehabilitation. We stressed the ways that long-term isolation violates the U.N. Convention on Torture, and that the Department is, itself, creating torture victims by its current practices. We delivered hundreds of cards that include interfaith prayers submitted by clergy and faith leaders throughout the country, specifically written to acknowledge the first anniversary of last year's historic hunger strike. The delegation asked that the prayer cards be offered to inmates in SHU throughout the California prison system, as a tangible sign that communities of faith and conscience are observing the day by joining the movement to dismantle the domestic torture of solitary confinement.