How you ask about the CIA's torture program matters. An analysis of 2014 polling finds no evidence likely voter screens created false trends. And Republicans and Democrats agree on one thing: They all hate Congress. This is HuffPollster for Tuesday, December 16, 2014.

'ABOUT HALF' SAY CIA INTERROGATION JUSTIFIED IN ONE POLL - Pew Research: "Following the Senate Intelligence Committee’s report on CIA interrogation practices in the period following the Sept. 11, 2001 terrorist attacks, 51% of the public says they think the CIA methods were justified, compared with just 29% who say they were not justified; 20% do not express an opinion. The new national survey by the Pew Research Center, conducted Dec. 11-14 among 1,001 adults, finds that amid competing claims over the effectiveness of CIA interrogation methods, 56% believe they provided intelligence that helped prevent terrorist attacks, while just half as many (28%) say they did not provide this type of intelligence. Partisan divides on these questions are wide. A large majority of Republicans (76%) say the interrogation methods used by the CIA after 9/11 were justified. Democrats are divided – 37% say the methods were justified, while 46% disagree. About twice as many liberal Democrats (65%) as conservative and moderate Democrats (32%) say the CIA’s interrogation techniques were not justified." [Pew] 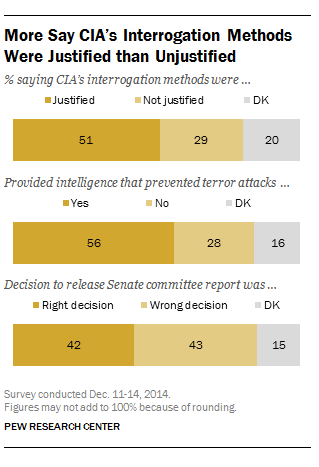 ...as do an even greater majority in another survey - Adam Goldman and Peyton Craighill: "A majority of Americans believe that the harsh interrogation techniques used on terrorism suspects after the Sept. 11, 2001, attacks were justified, even as about half the public says the treatment amounted to torture, according to a new Washington Post-ABC News poll.
By an almost 2-1 margin, or 59-to-31 percent, those interviewed support the CIA’s brutal methods, with the vast majority of supporters saying they produced valuable intelligence.
In general, 58 percent say the torture of suspected terrorists can be justified 'often' or 'sometimes.'" [WashPost]

ABC/Post finds highest 'justified' response - Of four national polls conducted in recent days, the ABC/Washington Post poll finds the biggest number (59 percent) willing to justify the CIA's actions, but asks generally about the "treatment of suspected terrorists." Their question also follows a series of questions informing respondents that the CIA disputes the Senate report and asking whether "the CIA treatment of suspected terrorists amounted to torture" and may have produced "important information that could not have been obtained any other way." Three other polls find fewer -- roughly half -- willing to justify the CIA interrogation methods. 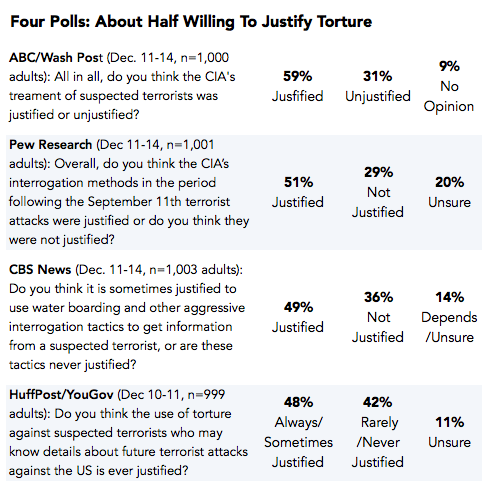 Other surveys find support at close to 50 percent - The Pew Research question, which referenced "the September 11 terrorist attacks," found 51 percent willing to justify unspecified "interrogation methods," while HuffPost/YouGov found 48 percent willing to justify "the use of torture against suspected terrorists." The CBS News poll, which referenced "water boarding and other aggressive interrogation methods" found a result in-between (49 percent justified). The much higher expression of total opposition on the HuffPost/YouGov poll (42 percent) owes in to offering respondents four answer categories, with 18 percent saying torture is "rarely justified" and 24 percent saying it is "never justified." The HuffPost/YouGov poll also found Americans far less supportive of the specific tactics mentioned in the Senate report. Majorities, for example, consider it unacceptable to threaten detainees with physical or sexual violence, to keep them inside a coffin-sized box for several days, or to threaten to hurt their family members. [CBS, HuffPost]

EVERYONE STILL HATES CONGRESS - Rebecca Rifkin: "Americans' job approval rating for Congress averaged 15% in 2014, close to the record-low yearly average of 14% found last year. The highest yearly average was measured in 2001, at 56%. Yearly averages haven't exceeded 20% in the past five years, as well as in six of the past seven years. Congress' approval rating has averaged less than 20% each year since 2010. In 2009, President Barack Obama's first year in office in which he governed with a large Democratic majority in Congress, an average of 30% approved. Prior to 2008, Congress' job approval over the 40-year history of Gallup's measure had been below 20% only twice before, in 1979 and 1992. After peaking in 2001 at 56%, a high figure that reflected the rally in support for government institutions after the 9/11 terror attacks, Americans' approval of Congress has generally been dropping each year, with the exception of the spike in 2009. This past year, Congress' approval ratings averaged 15% among both Republicans and Democrats, while averaging 14% among independents." [Gallup] 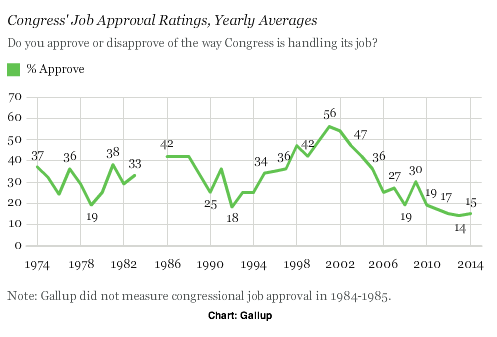 DID LIKELY VOTER SCREENS CREATE FALSE TRENDS? - No, says HuffPost Data Scientist Natalie Jackson: " Polling experts know that polls of likely voters are more favorable to Republicans than polls of registered voters. The registered voters least likely to vote are often low-income voters, voters of color, urban dwellers or some combination thereof -- all groups that tend to report Democratic preferences in polls, but that often indicate they are less likely to actually vote on Election Day....Many pollsters will report results based on registered voters until August or September, then shift to reporting results based only on likely voters as the election draws near. This change poses a problem for poll aggregators and forecasters. We want to show real trends, not trends that only show up because of a change in polling methods...The HuffPollster model analysis shows that while there is a consistent bias against Republicans when registered voter polls are included in the model, there is not any effect on the overall trend -- that is, the change in vote share over time. This chart shows the Republican poll estimates averaged across competitive states...for two different model runs: the final model we published, which included registered voter polls with no adjustment, and the model run with all registered voter polls excluded. The trend lines are strikingly similar. In fact, they are nearly identical. Republicans gained in the model estimates from the end of August all the way until the election, and the gains were the same regardless of whether registered voter polls were included. [HuffPost] 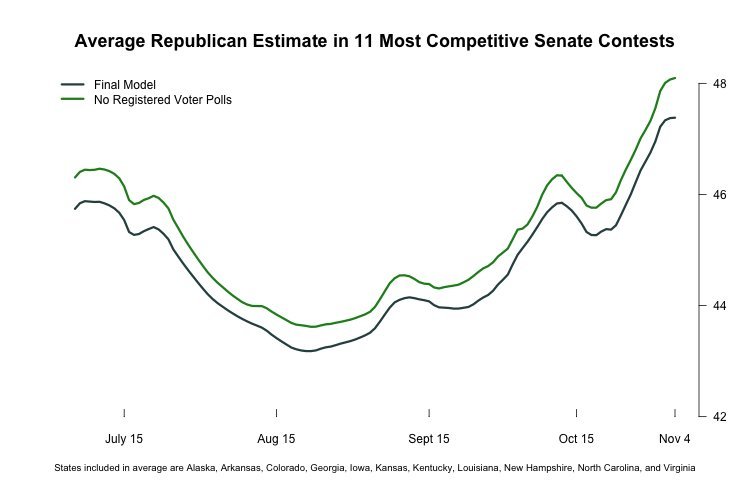 -A Monmouth 2016 poll that asked Americans an open-ended question about who they'd choose for president finds support for Hillary Clinton, but no clear GOP frontrunner. [Monmouth on Dem field, GOP field]

-Jesse Singal reviews a study that finds talking with a gay person can change minds on gay marriage. [NYMag]

HUFFPOLLSTER: Polls Differ On Whether Torture Can Be Justified
Politicians React To CIA Torture Report