It's been nearly a month since a Senate report revealed the gruesome torture techniques used by C.I.A. operatives following the Sept. 11 terrorist attacks, and the controversy surrounding whether or not to publish more information continues to stir debate.

In 2004, the ACLU sued the U.S. government for the release of more than 2,000 photos from Abu Ghraib after some of the disturbing photos were leaked that year. According to Mother Jones, a federal judge forced the Obama administration to release the photos or provide detailed information explaining how the release of each picture could threaten national security. The government chose the second option, and now, a hearing has been set for Jan. 20.

While Obama said the release of the photos would “further inflame anti-American sentiment,” some question the true extent of the national security risk.

“The United States has made this argument about a number of disclosures, from the location of secret C.I.A. prisons in Poland and Romania to information about Guantanamo abuses to the C.I.A. report," Sifton said. “They always say this and it never comes true.”

“I believe that these photos should be released so we can have a full area of that debate. I mean, the saying is, ‘A picture is worth a thousand words.’ Let’s see if these policies and these activities actually do reflect our core American values,” he said. 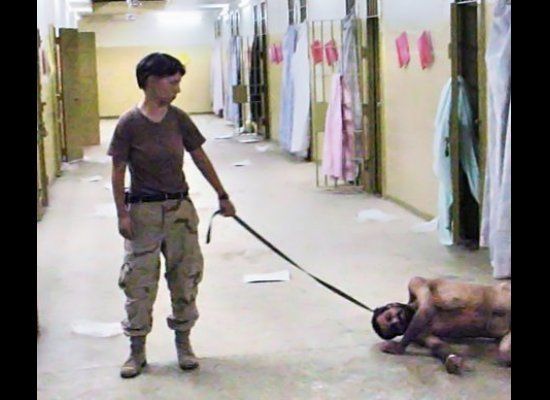 1 / 9
Abu Ghraib - "Gus" on a leash
"United States Army photo from Abu Ghraib prison in Iraq showing Pvt. Lynndie England holding a leash attached to a prisoner collapsed on the floor, known to the guards as "Gus."" Photo Credit: <a href="http://en.wikipedia.org/wiki/File:Abu-ghraib-leash.jpg" target="_hplink">Wikimedia Commons</a>